The Daily Neopets is extremely proud to present our visitors with the most interactive and informative article regarding the Neopets Key Quest beat testing which is currently taking place for 2,500 premium members. TDN was lucky to get 2 staff members into that group so we can provide you with the best coverage possible of Neopets Key Quest.

Below you will see these 3 things, we have linked them internally for faster navigation through this gigantic'o page!

This has got the be the coolest thing any website has every provided for its users to experience. This is an identical copy tutorial on what in the world Neopets Key Quest is, and how it functions. This is what the beta testers are seeing, so why shouldn't the average user be able to see it AND use it too, right?! Try it out.

Because our News team was able to get into the Closed Beta testing of Key Quest, we are able to bring you exclusive screen shots of the game. Click on pictures that you would like to see bigger. Enjoy! 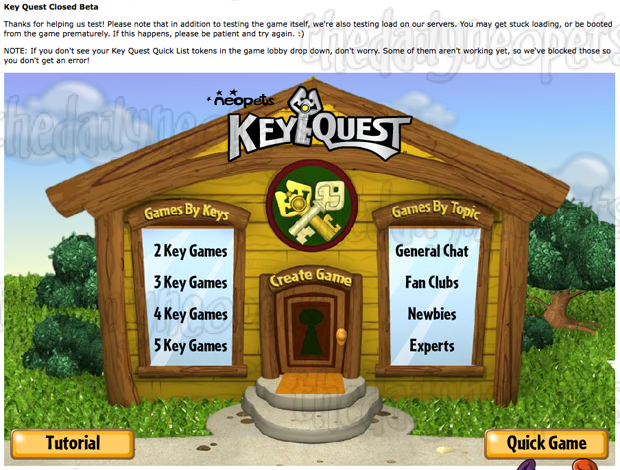 This is the game lobby. Here, you can acess the Tutorial, find a game to enter based on topic or number of keys, or join a quick game. 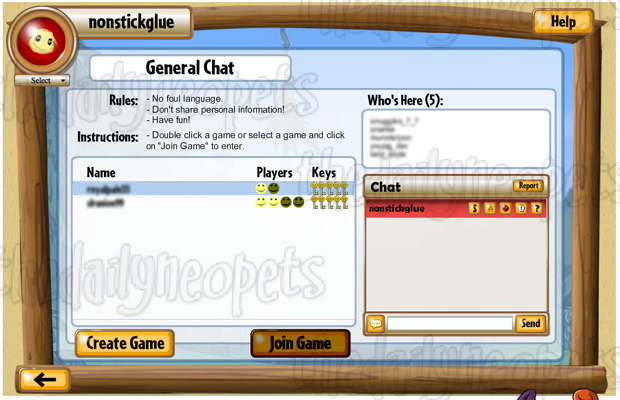 This is the General Chat topic choice. Here you can find games that are listed under General Chat and join one. 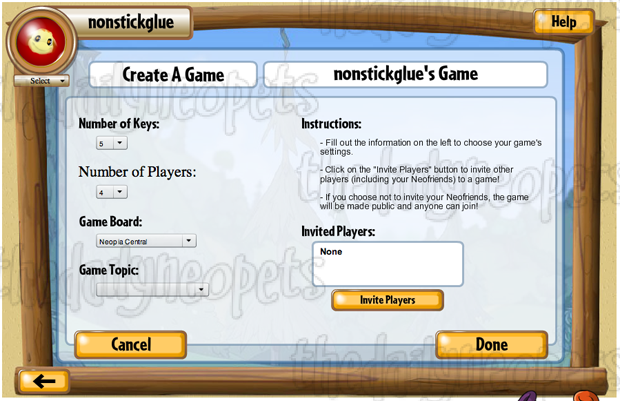 This is the Create a Game panel. With this, you can pick how many people can join, how many keys are needed, the topic, the world it's in, and invite specific people. 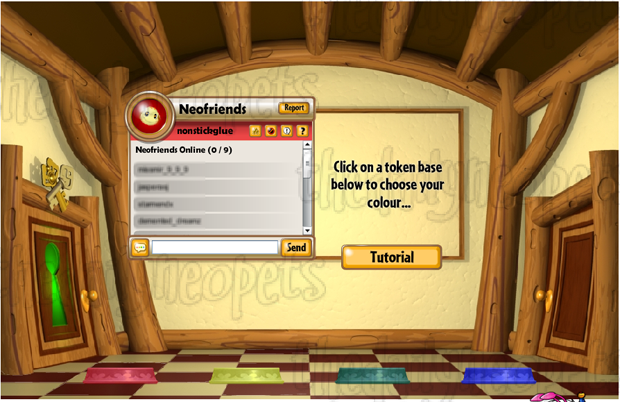 This is the waiting room. At this point, you're picking the color base for your token. The base color simply helps you tell tokens apart. 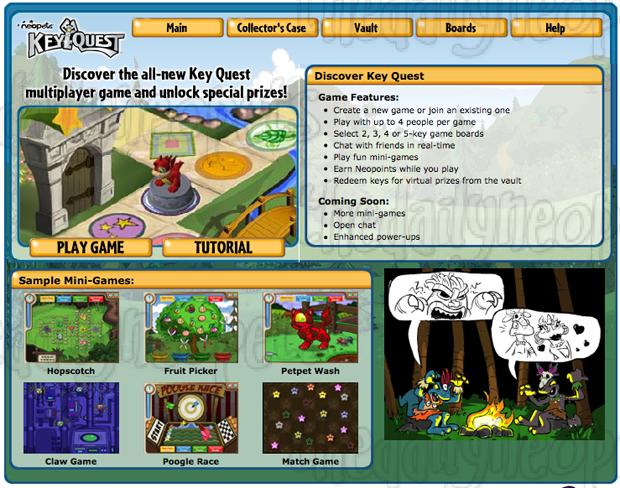 This is the main page of Key Quest. Here you can acess the game, the boards, and your collector's case as well as several other things. 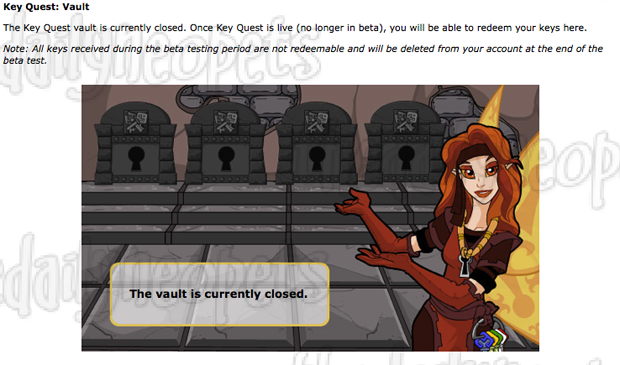 This is the Vault, where you can use the Keys you collected during a game to unlock cool prizes. Right now it's closed since it's still in Beta, but when it opens be sure to go there once you have some Keys. 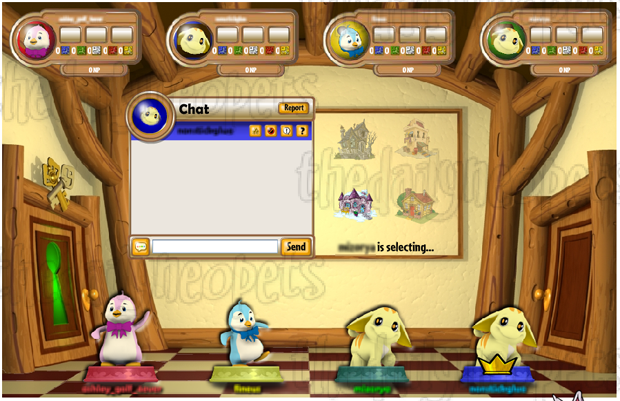 Another job of the waiting room, in this screenie everyone is picking their starting point. Before this, everyone rolls and the playing order is decided. The same order is used to determine who picks first.

Starting the game. Everyone's at their starting points. You can see a few Keys nearby, as the Quick Game board is small. 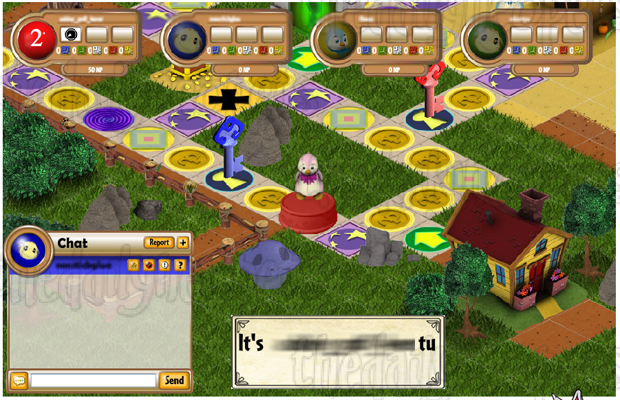 The Red player just rolled and is currently moving around the board. 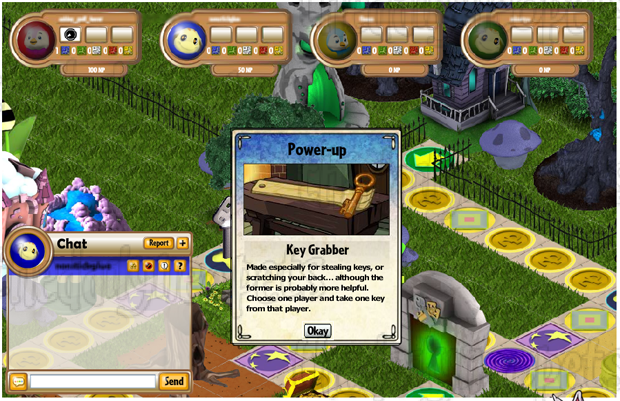 The Blue player (also the screenier) got a power up! The Key Snatcher is probably one of the most useful power ups out there.

At the start of your turn, you have 20 seconds to decide if you want to use one of your power ups or just go ahead and roll. 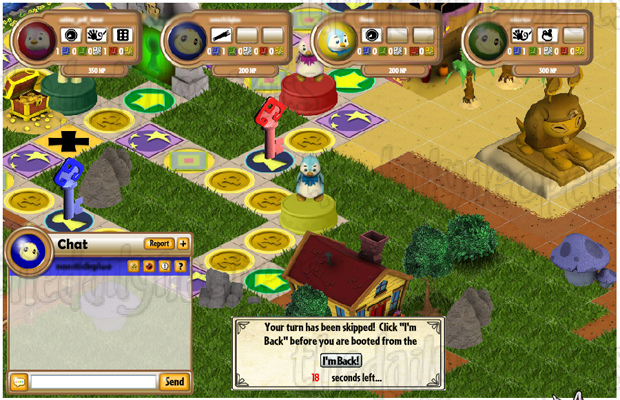 Our ever intelligent screenier got distracted and his turn got skipped. He now has 20 seconds to confirm that he is still there or he'll be booted and just sit there for the rest of the game. 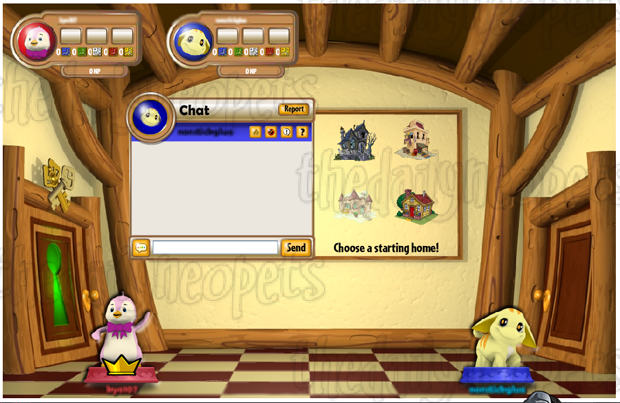 He didn't click in time. Back to the waiting room!

Another 20 seconds to decide if you want to warp to another spot on the board.

The instructions for one of the only two working Mini Games, Spyder Scare. 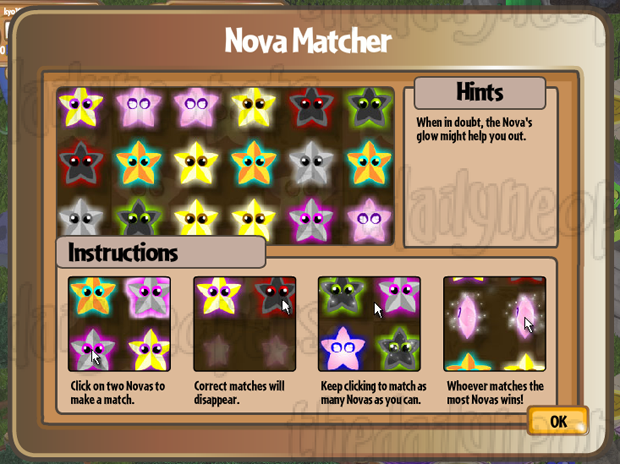 The instructions of the other working Mini Game, Nova Matcher. 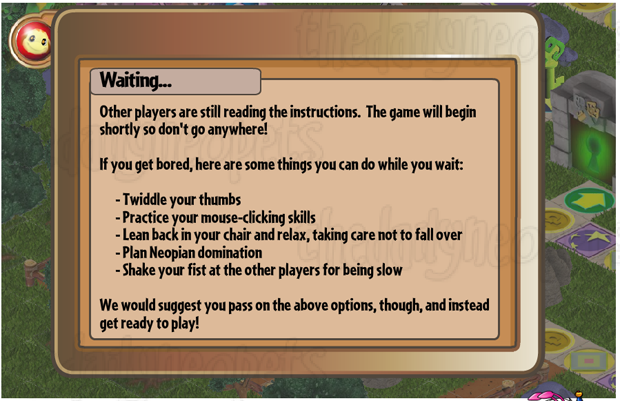 The Mini Game waiting screen. You're ready to play but someone else is still reading the instructions. Or maybe they forgot to hit OK. 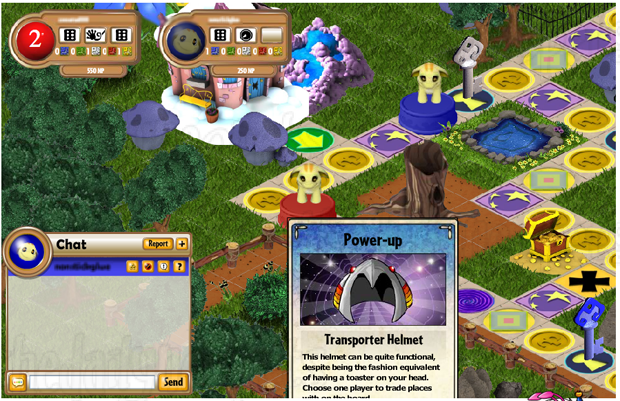 Red found another power up! The Transporter Helmet is great if someone is right by a Key you need.

For those of you who don't know, Snarkie is a well-known Neopets programmer. She appears to be leading the front of this project, at least from the beta-testers eyes. She has been very public on the private NeoBoard which was set up for beta-testers only, answering user questions, replying to comments, and fixing small bugs. The following questions were taken directly from the "private" beta-tester NeoBoard and made public to our visitors who should know what is going on in there, don't ya think!

There is some pretty cool stuff that was revealed, talk of an avatar, trophies, chatting features, and more! Be sure to read through each question to get all the juicy details.

"Snarkie, any idea why the Series 2 plushies are so hard to find? None of the Targets around my area have them yet and I have a lot of Targets in my area. I love the island tokens and series 2 has several island ones. Thanks"
Snarkie Answer: "yeah, they're looking into that. Hopefully they'll be out shortly."

"I didn't get the mail either but I got to play a whole game and I got two keys went to the green door and won. :P"
Snarkie Answer: "curses. :P You're supposed to get all 5 keys. BUG!"

"I will have to do the tutorial in the morning, will I be thrown out of beta if I don't do it now?"
Snarkie Answer: "nope!"

"The pre-generated chat thing is kinda odd. It would be nice if you could type the beginning of a word and be give a list of options from that."
Snarkie Answer: "that will be a feature in the future. Well, something like it anyway."

"Snarkie, any chance of a Keyquest avatar in the near future?"
Snarkie Answer: "dunno. I don't do avatars anymore. I'm sure they'll make one, though."

"Snarkie, if we choose a quick game and there's 4 in the waiting room but one drops out, should we keep waiting for it to load or should we just try another game? This is before any dice have been rolled or any starting locations picked. Will the game adjust and turn it into a 3 player game? Or is it messed up when someone leaves?"
Snarkie Answer: "I would wait. If this happens AFTER you roll dice or choose homes, start over. It doesn't quite know the person left and gets confused at that point. :)"

"Is the whole game timed, nearly? With skipped turns and such if you take over the time limit? Because I'm wondering about well.. people who are in need of a bathroom break while playing a longer game It'd be pretty unfortunate if it was to skip my turn for that reason."
Snarkie Answer: "it is timed. Almost every move you make has a timer. Without the timers, you could sit there forever and force the rest of the players to wait, which is lame, so we force you to make a decision to keep the game moving. "

"Can a person play Keyquest if they don't have any Key Item tokens?" Snarkie Answer: "Yup!"

"Ok, so I see that we can earn neopoints (well, after beta anyway) from this game. So I guess it's something we will not be allowed to do on side accounts, and I should redeem these other tokens on my main?"
Snarkie Answer: "There will be a limit, yes. Can't tell you what it is at this point, but it will be higher than 3,000."

"Anyone know which browser this works best in? My firefox quit responding right after the game and during some parts of it."
Snarkie Answer: "They should both work fine. I'm playing in Firefox 3 now. But yeah, try the other if you're having problems with one, and fill out a bug report to let us know. ;)"