It's the latest game to take Neopia by storm! Every world competing for that elusive prize of being crowned Altador Cup Champions! Battling the elements, quite literally, with Fire, Snow and Earthly Yooyus can be difficult if you don't know what you're doing, but with a little expert knowledge you'll soon find controlling the Yooyu is a real breeze...

The aim of the game is to get the Yooyu into the opponents' goal and score more than your opponent does in the three minute match. The more you score and the better you defend, the better the final score will be.

In order to play Yooyuball, you can use your keyboard or your mouse.

You control the players on the pitch with the arrow keys of your keyboard or your mouse. The closest player from the ball is automatically selected. All your other players are controlled by the computer and they run all around the place.

If there is one key that comes very handy in the newest version of Yooyuball, it's surely spacebar. You use that key to shoot into the opponents' goal. If you hold spacebar while you carry the ball, you notice a power indicator. It adds a strength factor to your shot when you release your spacebar. Spacebar is also the key to press if you fancy passing the ball to one of your teammates. Moreover, it's now possible to steal the ball from your opponent by pressing spacebar. If you are not using the keyboard, then a left mouse click would do all the actions above!

Use shift key on your keyboard to call all the players (apart from the one you are controlling) back to their pre-defined positions. This is useful for off-Yooyu attack.

First of all, let's take a look at the configuration of the pitch. If you play left to right, then you have to mentally inverse everything, which means that you would be scoring on the right side instead of the left side. 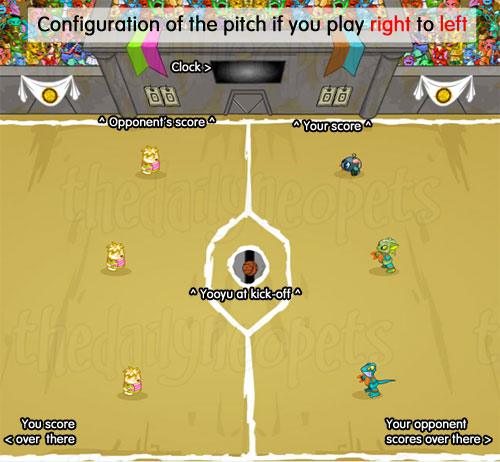 Before your players enter on the field, you get to choose your direction of play and your formation. While the direction of play doesn't affect the game play other than by influencing on which side of the field you score your points, it is crucial that you understand the difference between the three possible formations.

Be sure to try all the formations to see which one suits better your playing style.

Another new addition to this year's Yooyuball is the addition of power-ups. There are four powerups which can appear anywhere on the field, but will disappear if not picked up after a certain time. To pick them up, simply run over them with one of your team members. Each lasts only a limited amount of time. At least one appears in every game.

There are 7 different types of Yooyu; Normal, Snow, Fire, Mutant, Faerie, Darigan and Robot. We'll go into detail with these Yooyus later, but here's some general information about how the Yooyus work in the game.

Each Yooyu is picked completely at random. It bursts dramatically through the game screen to reveal its identity to you right before your match begins. (You can skip this scene by hitting the Spacebar on your keyboard). When the play commences, it sits in the centre of the field ready to be picked up by either team. It's a race to get to the Yooyu, remember. From here on, the Yooyus will display their unique characteristics, depending on which one was chosen.

This section offers you tips to get the ball from the kick-off, to score with the seven different type of Yooyu and to improve your defense.

In the past, players were always eager to get the ball from the kick-off. While it's still possible to be the fastest to reach the ball, expert yooyuballers prefer to adopt a sneakier method. When the ball is released from underneath the field, move forward and stop at the first white line you encounter. From that point, be prepared to press spacebar as soon as the forward player from the opponent's team touches the ball. You will charge the player, steal the ball from him and gain a boost of speed that is really useful to score quickly. The forward player controlled by the computer will probably steal the ball from you if you don't use that strategy! 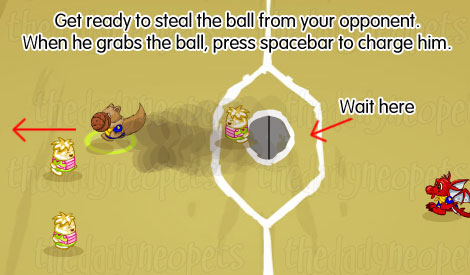 At the kick-off, charge the opponent as soon as he touches the ball!

Now that you control the ball, your only objective is to put in the goal! There are many strategies that can help you to win your Yooyuball match. Earlier, we gave a description of the seven different Yooyus that you encounter in the game. Now we are explaining how to score with them!

Generally speaking, you run to the goal in almost straight line, holding spacebar to fill the power bar, and release it when you are ready to score. Normal, Snow, Clockwork, and Fire Yooyus are happily following straight line trajectories, which means that you can use the same strategy to score with all of them. It's also a good idea to always treat the Mutant Yooyu as a Normal Yooyu, even though the Mutant one is unpredictable. The only noticeable difference between the aforementioned types of Yooyus is the time they take to travel a given distance. Consequently, you can take more risks with a Fire Yooyu than with a Snow Yooyu that will need to be put in the goal from a closer distance than the former. 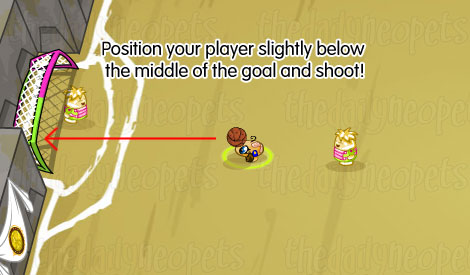 To score with a Normal, Snow, Clockwork, Fire or Mutant Yooyu, shoot on a horizontal, two taps up or down rather than dead center.

Every now and then, you also need to deal with Faerie Yooyus. This ball has the particularity to fly around in arc. The best way to put it inside the goal is to run in a straight line from the kick-off and to shoot when you are fairly close to the goal. The Faerie Yooyu then curves around the goalkeeper, granting you one point. 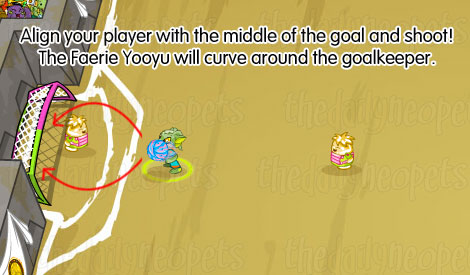 To score with a Faerie Yooyu, align your player with the center of the goal and shoot.

It's also possible that you encounter a mischievous Darigan Yooyu that always flies at unexpected angles. With that type of Yooyu, run directly parallel to the net and shoot without stopping or turning. It still has a chance to go on the opposite direction, but that's a risk to take. If necessary, you can simply allow the other team to have the Yooyu and keep it on their side. Chances are, they'll get it in their own goal eventually. 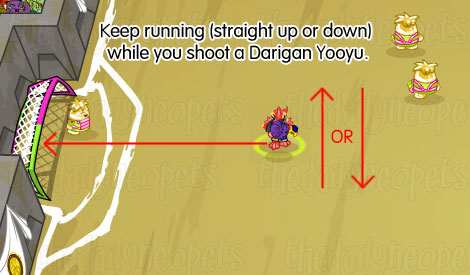 To score with a Darigan Yooyu, remain parallel to the goal and shoot without stopping or turning.

Tips to improve your defense

Yooyuball is mainly an offensive game. However, as the computer gets smarter, you might need to come up with defensive strategies. Here are some things to keep in mind:

Every June, Altador hosts a competition open to all those in Neopia - The Altador Cup. From Altador to Virtupets, people pick their favorite world and play Yooyuball to see who can be crowned Altador Cup winner. For more information on the Altador Cup check The Daily Neopets' Altador Cup Coverage!

So that's it. Hopefully you now know more about Yooyuball to go out and play it yourself. Watch you don't scald your hands on the fire Yooyu as you rebound your way to victory! Hooray! 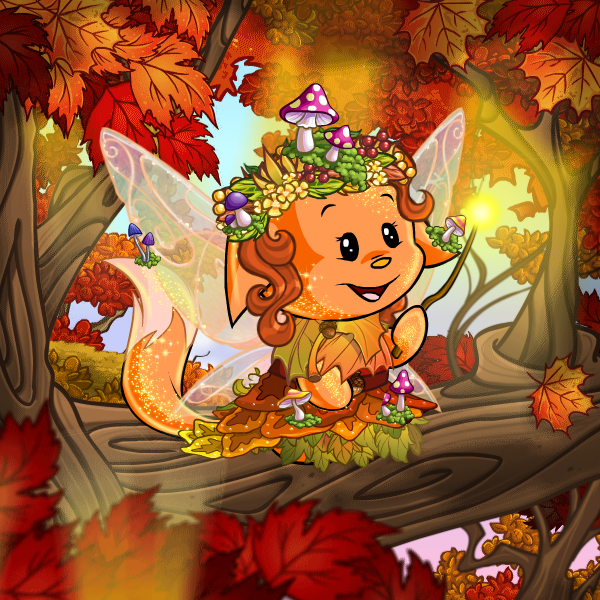 Winning entry for "Fall Festivities"!
Click here to enter the next round!