It's a busy day at the Slushie shop! The customers are coming in at a rapid pace, and they want their slushies... or else! Help the Tuskaninny waitress serve the angry customers before they reach the end of the counter. 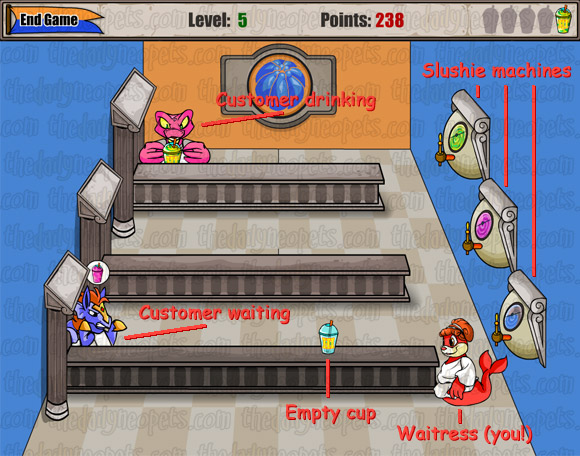 When you see a new customer, look at the color of the slushie they want (in the thought-bubble over their head). Then, move to the according slushie machine by using the UP and DOWN arrow keys. When you're standing near the slushie machine, press the RIGHT arrow key to make the waitress turn to the machine, and then press the SPACE bar. Wait until the slushie is ready, then press the LEFT arrow key to turn the waitress back to the counters. After that, use the UP/DOWN arrow keys again if needed to get to the customer, and press SPACE to give them their slushie. They'll be drinking it for several seconds, and then they'll leave, making the empty cup move along the counter back to you. You must catch it, or you'll lose a life. You also lose a life if the customer reaches the end of the counter before you serve them. Remember that you have 5 lives, and there is no way to gain additional ones, so be careful and try not to waste them.

The beginning of the game is easy, but as you keep serving the guests, your game level goes up, making the customers appear more frequently and being less patient. So you'll have to speed up!

Your game level goes up every 50 points.

If you see that some of your counters are getting overcrowded, you should consider serving the customers there by giving them any slushie, not necessarily the correct one. Just stand next to the machine which is near that counter and make several slushies of that color, serving the customers standing near that counter. You'll get less points, but you'll save your precious lives. And when trying to catch several empty cups in a row, keep in mind that the second counter is longer than the first one, and the third one is longer than the previous one, so if two customers release their empty cups on different counters at once, go to the shorter counter first.

Slushie Slinger is a game anyone can play! Some people like it so much that they prefer earning their Altador Cup points by playing this game only :) So why not give it a try? :) Good luck!