Kacheekers is Neopets' version of checkers or draughts. Like many board games, the goal is to clear all of your opponents pieces. This is a multiplayer game so you play against real people. There is also a monthly Kacheekers tournament with great prizes! For more information on getting started, joining the monthly competition, and general multiplayer game information, see the Multiplayer Game Lobby guide

The controls are very simple. When it's your turn, click on the piece that you want to move, click on the space you want to move it to, then press Your Move to finalize the play. Then, click the Waiting button to see if your opponent has made their move. That's everything on controls. If you already know the rules of checkers or draughts, skip ahead to the Tips & Strategies section. 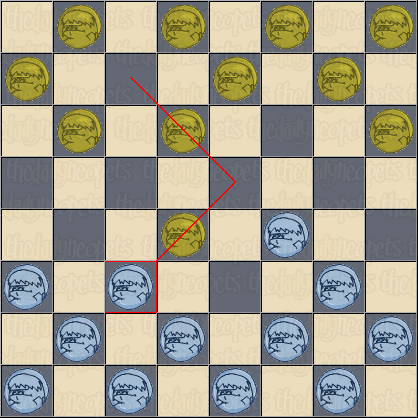 Pieces can only move forward until they have been "kinged".? A piece is kinged once it reaches the furthest row on the opponent's side. At that point, the piece may move forwards or backwards, making it far superior to regular pieces. In Kacheekers kinged pieces look only slightly different than normal pieces so make sure to remember which pieces are kinged. The kinged pieces have a thick rim on the top left as shown below.

Unlike many variations of checkers or draughts, in Kacheekers eliminating opponent's pieces is not compulsory, meaning you can choose not to jump an opponent's piece. This takes away a lot of the skill and strategy involved in the traditional checkers game. Nevertheless, here are some good tips to keep in mind when playing: 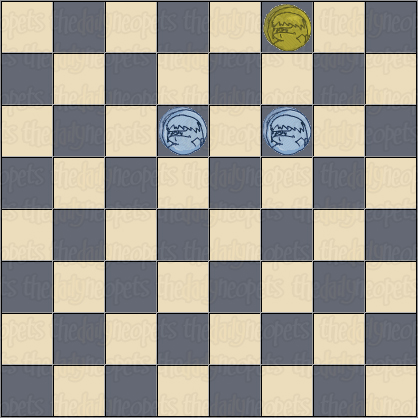 Although actually playing a game of Kacheekers can get boring with all the waiting, the trophy is one of the easiest to get. If you don't get it on your first try don't give up! There's always another competition the next month. Again, for more information on the monthly competition and general multiplayer game information, see the Multiplayer Game Lobby guide