The Neopets Team, for whatever reason, don't mention the rules of Geos in depth anywhere on the Neopets site, so pay attention. To win a game of Geos you must create four separate shapes on the game board before your opponent. The four shapes and their possible positions are shown below:

These shapes are constructed by placing pieces on the game board. Each turn you place one piece on the board. You and your opponent place pieces on the same board. The twist in the game is that you cannot see eachother's pieces. If you try to place a piece on top of one of your opponent's pieces, their piece is removed and you get to play again. You can then place your piece in the newly emptied space, or on another spot.

To win a game of Geos you need to construct shapes, so that should be your main focus. To have an advantage, you want to have control over as much of the board as possible. To begin, the best spot to place a shape is near one of the corners. Take a look at the screenie below. The shaded area shows the spaces that are completely unusable for the rest of the game. You know not to place pieces here but your opponent doesn't. For the largest advantage, try to make as much of the board unusable as possible. 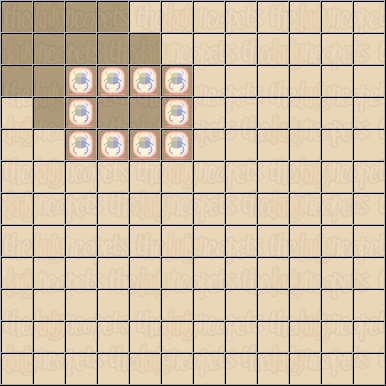 If you are falling behind in a match, you may consider using a "bombing" strategy. The goal of bombing is to destroy your opponent's shapes before they are completed. This comes down to luck, but use common sense when bombing. Bomb spaces that are in the open, rather than the corner spaces which aren't likely to have one of your opponent's pieces. Remember, if you do successfully remove one of your opponent's pieces, your turn continues. There are likely more of your opponent's pieces near that one and you can remove a second piece or more if you are lucky. Also keep in mind that your goal is to eventually construct the four shapes, so while bombing don't spread your pieces out too far. Try to eventually put as many of your pieces to use in building shapes. Unless successfully used for bombing, a piece that isn't put to use is usually a turn wasted.

A tip from one of our visitor was: Apparently, if you place a piece that will complete multiple shapes at once, it counts it as cheating. What she had done, is placed a piece in the bottom right corner, one space away from the right edge in an attempt to complete her rectangle, however she also made a circle at the same time. Geos is possible to lose because the system thinks you're cheating. In other words, don't do this!

Although actually playing a game of Geos can get boring with all the waiting, the trophy is one of the easiest to get. If you don't get it on your first try don't give up! There's always another competition next month. Again, for more information on the monthly competition and general multiplayer game information, see the Multiplayer Game Lobby guide