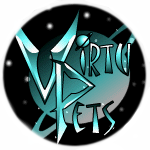 Since this is one of TNT's earlier plots, the exact details have been lost over time, but the plot basically told this story: One unfortunate day, the space faerie arrived in Neopia bringing with her a strange coded message from space. She asks Neopians everywhere for help her for she senses that a great danger is coming.

Meanwhile, up in space, the evil Dr. Frank Sloth is putting the finishing touches on his plan and is beginning to put it into action, making Neopets everywhere disappear. Then he opened up his own shop to sell Virtupets and demanded that every Neopian disown their Neopets and adopt one of his Virtupets. A few days later, Neopians were amazed by a large space ship that was eclipsing the sun, this turned out to be the Virtupets Space Station. Over the next few days, Neopets continued to disappear and new evil mutant Neopets began to take their places.

Finally, after witnessing all this evil, the Space Faerie with the help of the Island Mystic was able to decode the message and figure out a plan to stop Dr. Sloth. It turned out that Dr. Sloth was using an evil ray gun to turn all the nice Neopets bad. Now it was up to the Space Faerie to stop him. The Space Faerie along with help from Neopians and their codestones was able to get to the Space Station only to find that Dr. Sloth had enslaved a new species of Neopet known as the Grundo. She was unfortunately captured and it was up to all the people back on earth to help her escape and foil Dr. Sloth's plan.

Dr. Sloth continued to mutate Neopets and build his army until it was discovered that adopting 20 000 Grundos would be enough to set the Space Faerie free and hopefully allow her to beat Dr. Sloth. The plan worked and the Space Faerie was freed in the nick of time and allowed her to reverse Dr. Sloth's ray and make it explode, destroying Dr. Sloth and his minions forever... or did it? The Space Station later became a home for the new Grundo species and another new Neopet was found in the basement of the space station, the Moehog. Why TNT decided to stick Moehogs in there we will never know.

Since this plot is so old it is unknown if there were any prizes, but it is very unlikely, this was just a little story plot for Neopian players to keep them entertained.