Deep within the desert to the south of the Haunted Woods stands a magnificent city called Sakhmet. This thriving desert oasis is ruled by a young Aisha called Amira, who watches over her city from the Royal palace. It was on a seemingly normal day in Sakhmet when a mysterious stranger entered the city, with the thought of making Princess Amira his Queen. This strange young man introduced himself as Prince Jazan, and bribed his way into Amira's court only to be turned down by her, and thrown out of the city by her guards. Angered, he swore revenge on her and on her people.

As he rode away from the city, two young youth's - members of a gang called the Desert Scarabs - decided to follow him, hoping to gain a few coins from this stranger's pocket. These two young thieves, Tomos and Nabile, followed Jazan across the desert only to discover that is footprints ended in a city that was long since dead. Confused, they searched the ruins for many hours but to no avail: Jazan and his Uni steed has simply vanished into thin air! Eventually they had to admit defeat and head back to Sakhmet, watched ominously from the shadows by Jazan.

Meanwhile, back in Sakhmet, the members of Amira's court were researching Jazan, and the city he claimed to rule, Qasala. What they discovered led them to believe that Jazan's claims were baseless - how could he possibly rule a city that had been destroyed more than two hundred years before? Things slowly returned to normal, and Amira prepared to speak before her people.

Unknown to Amira, however, Prince Jazan was about to return to claim what he believed to be his. Seated on the wall of Sakhmet, eating stolen fruit, the Desert Scarabs watch his arrival with interest. Annoyed at being unable to find him the other day, Tomos and Nabile sneak out of the city to wait in ambush for Jazan. At that exact moment, Amira steps forward to address her people. Just as she is about to speak, Jazan rides towards her ready to claim her as his wife. She laughs at him, throwing her knowledge about his destroyed city at him. Angered, Jazan begins to chant, casting a spell that pulls Sakhmet from Neopia and into an alternative dimension.

Outside Sakhmet, Tomos and Nabile are contemplating how much they will be able to steal from Jazan when they notice the strange clouds of magic sweeping around their home. Before they can so much as blink their city has vanished, without so much as a brick left to mark the spot where it once stood. With no other options left to them, and the sun beginning to set, the two friends set out to find shelter in the ruins of Qasala. Later that night, Nabile is awakened by a strange noise in Qasala. She quickly wakes Tomos and they douse their fire in the hopes that whatever is out there won't be able to find them. Curious to discover what is stalking this abandoned city, the two Scarabs creep out from their hiding place to discover Jazan's Uni steed poking around the ruins. While they are hiding, Tomos is startled by a little desert petpet and the Nightsteed is alerted to their presence. They flee from him as fast as they can, accidently tripping a trap in the old city and falling through a trapdoor.

Sakhmet has not been destroyed however. Deep within the alternative dimension into which they were pulled, the city and its inhabitants live on, tormented by countless undead fiends. The people of Sakhmet can do nothing to protect themselves from these creatures, except hide in their homes and barricade the doors. In the palace, Princess Amira and her advisors try desperately to come up with some solution to their current predicament. Nothing seems to slow these fiends down for long and things are looking grim. It is the rest of the Desert Scarabs who finally stumble across the solution. As tempers escalate in the Scarab's planning session, they attract the attention of the undead. While all seemed lost, the large Grarrl with whom they'd taken shelter managed to knock one of the creatures unconscious with a sharp blow to the head. Using this, and other knowledge they'd gained from trips outside, the Scarabs were able to make it up to the palace to inform the Royal guard of the creature's weakness.

Back in the ruined Qasala, Tomos and Nabile come around after their fall to find themselves in an underground chamber, preserved below the city. They wander for hours before becoming trapped in a large room that is filling with water. Just survival seems impossible, Tomos notices a strangely shaped tile in the wall - as soon as he pushes it the water stops flowing and the two youths are expelled from the chamber into the true secret rooms beneath Qasala. It is in one of these rooms that Nabile discovered the true history of this city, and of the evil curse that was placed upon it. She rushed to tell Tomos, who scoffed and dragged her back to look at some of the weapons he's found in the Qasalan armoury. When he picks up an old ring the pair are accosted by a giant monster and chased into a pit full of spikes. Thankfully, when they managed to climb out of the pit the creature is nowhere to be found.

Meanwhile, in Sakhmet Jazan watches furiously as the palace guard rescues the families of the city and brings them to safety. From his tower he releases a giant fire-breathing Scorchio called Scordrax to lay waste to the city. Amira watches in horror as her city is destroyed before storming to Jazan's tower - determined, once and for all, to end this. At the exact same moment that Jazan is handing Amira a ring, Nabile makes a surprising discovery about the rings, each of which has a specific function. Wondering what the ring he took from the armoury does, Tomos decides to try it on, much to Nabile's horror. In her haste to stop him from putting the ring on, Nabile throws her arms around Tomos... and the two are magically transported to Sakhmet's tower, right between Jazan and Amira. Jazan immediately has the pair thrown in jail, before announcing that he and Amira are to be wed.

While Tomos sits in his cell, Nabile manages to talk to one of the creatures guarding her - convincing the guard to allow her to try and talk to the Prince, and find a way to end this without hurting anyone else. The guard escorts Nabile to the palace and she interrupts the wedding ceremony in time to prevent it. During the commotion Nabile is revealed as a descendant of an exiled princess, and she confesses her love for Jazan. The pair are wed and as soon as the ring touched Nabile's finger, Sakhmet returned to the world and all was well again.

Nabile and Jazan returned to Qasala and began the task of rebuilding the city. However as time passed, their people remained among the undead and Jazan sent Nabile back to Sakhmet to research ways of ending the curse. With Nabile gone, Jazan begins to lose interest in rebuilding his city and grows weaker as he cannot bear to eat during her absence. Back in Sakhmet Nabile desperately researches the curse. After months of fruitless searching, a strange storm was seen approaching the city and the people hid again in terror.

A fiery skeletal being was soon seen approaching. He laid waste once again to Sakhmet, until eventually he had Amira and Nabile cornered in a distant corner of the palace. Sensing his wife was in danger, Jazan gathered his strength and set out to help her. He searched and searched for her, finally coming face-to-face with the skeletal monster - his father, Razul. A desperate battle ensured until Nabile was injured and Jazan found the strength to defeat his father.

All was well after that. The curse was lifted on all but the Nightsteed, who agreed that after all this time - what did looks matter anyway?

If you would like to read the complete comics, go here

The battledome was not a very large part of this plot, but there were a few opponents, which are listed at our Battlepedia.

The puzzle created for this plot was hugely complicated and was almost impossible to figure out alone. It involves themes such as scrolls and the Temple of 1000 Tombs and required participants to do many different things in order to complete each step. The incredibly long solution can be found here

The more points you received, the more fancy your trophy was. If you click on your trophy or another players trophy, you can see how many points they received and which steps in the plot they completed.

that you received if you helped move blocks or sand.

After a very long wait, the prizes were finally released at the Gift Shop of 1000 Rewards. Note that each person only had one keychain to choose from, the one with their symbol on it. Also, everyone who participated in the plot received the Lost Desert Sidebar/Layout, see our Layout article for more info.

There was one avatar associated with this plot that you could receive by completing and translating your Tablet. It is now retired (of course). 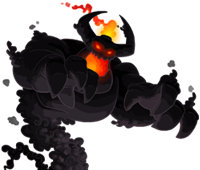 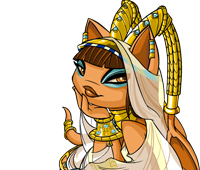 Written by Ryan and Izzy
Errors or incorrect info? Contact Us
Welcome to TDN, guest!
Log In • Register