Hunt for the Crown 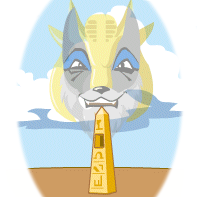 Our story begins at the unveiling of the Coltzan's Shrine, a monument honoring the late King Coltzan and featuring his magnificent crown, but when the shrine is unveiled, the crown is missing and a note is left in its place! What is a neopian to do? Well, find the crown of course. Players had the next two days to follow a series of clues that eventually led to the location of the crown.

It turned out that the crown was stolen by the Meerca brothers, Heermeedjet and Merouladen, who foolishly signed their name on a note they left on the Shrine. The plot was fairly short and only took two days, the Meepit brothers were no match for all of Neopia working together.

The prizes that were awarded are unknown and there were no trophies. If you have any more information, feel free to tell us.

| Unveiling of the Shrine