One fateful day an earthquake tore through all of Neopia, causing damage throughout, but hitting the Ice Caves the hardest, creating a huge crack right through them. After the earthquake subsided and Neopians began to creep back out of their homes, they noticed the crack and attempted to climb down it. It wasn't actually as hard as you would think, they further down they got, the warmer it got, until eventually there were even plants growing on the sides of the tunnel. Eventually, the vegetation got so thick that it was impossible to proceed and disappointed Neopians had to turn back and go home. That is until a currently unknown pet (the Chomby) started eating away at the vegetation from the other side until they eventually cleared a path for Neopians everywhere who started flooding into the new world, Tyrannia! Over the next few weeks, many different shop and stalls that we know today opened up in Tyrannia, creating a happy thriving area of Neopia... at least for now.

Around 15 days after the earthquake, Myncha, a member of the Council of Elders, was out in the mud flats of Tyrannia when he noticed some evil looking creatures slowly approaching Tyrannia. He quickly told Grarrg, the leader of the council, who immediately called for a town meeting to inform Neopians about what was going on and ask them to join the Tyrannian Army. Quite a while later, the invasion began, thousands of Korbat Scouts and Korbat Leaders attacked Tyrannia. As the Tyrannian Army began to fight back, more and more attackers came. The Korbats were followed by Skeith Invaders, Grarrl Troopers, and Chia Bombers and eventually Fire Grarrls, Tyrannian Buzz, and Grarrl Battlemasters joined the fight.

Unfortunately, the attackers, which seemed to be lead by a mysterious figure calling himself the Monoceraptor were winning and in order to help the Tyrannians, Kauvara cut the prices of her healing potions in half. This let the Tyrannian Army eventually defeat all the enemies leaving an eerie silence over Tyrannia, the Monoceraptor was coming. Once he arrived, it was obvious that the Army had a big fight ahead of them, but luckily Tyrannia succeeded and a heroic Lupe dealt the final blow, destroying the Monoceaptor once and for all... or did he? (all plots seem to end like that don't they)

As said above, the enemies came in waves, the next type came after a certain number of the earlier opponent had been defeated. They are in order from easiest to hardest. Unfortunately, there isn't much information in the way of HP and weapons. Here are some of the old images from the challengers...

The prizes for this war were quite unimaginative and a bit unfair, anyone who fought at least one monster got 10,000 NP at the end of the war and the player who was first to defeat the Monoceraptor got themselves a hefty 1,000,000 NP and "an item of his choice". What the item was though is unknown.

Participants were also given a trophy showing their rank and how many opponents they beat. Note, most of these numbers are approximate, not exact. 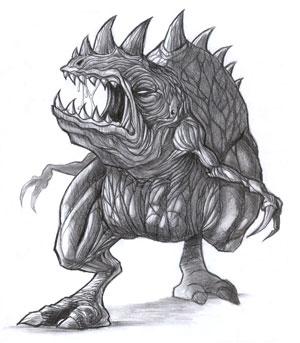