The Underwater Chef is constantly under stress cooking food for the deity of Mystery Island, Mumbo Pango. For that very reason, he greatly appreciates whenever someone helps him with the gathering of ingredients. Among the volunteers include a native Lenny named Wheeler. With the task of collecting a huge amount of coconuts, Wheeler must quickly travel across the island in search of them to fill his basket.

The controls of the game are fairly simple. Pressing the up arrow key increases the speed of the bike, while pressing the down arrow key will bring the bike to a sudden halt. The left and right arrow keys control the balance of the bike, particularly while airborne or overcoming obstacles. The space bar changes the bike's direction. 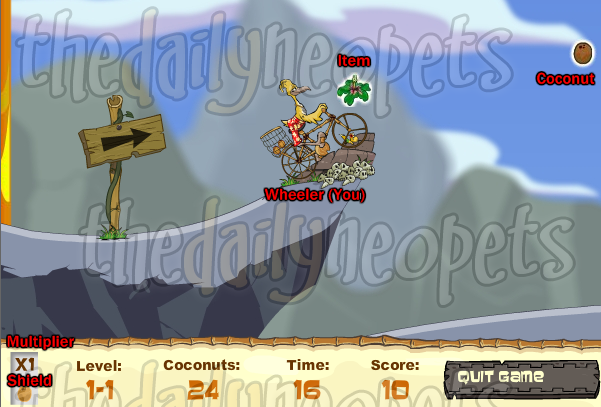 The objective of the game is as followed; you must guide Wheeler throughout the levels of Mystery Island, collecting coconuts and performing bike tricks.

Coconuts are basically Wheeler's version of a health bar. Whenever the bike crashes, a certain amount of coconuts spill out of the basket depending upon the severity of the wreck. Falling into a trap such as a spike pit will cause a large amount of coconuts to be lost, while a normal wreck, such as taking a tumble when going down a hill, will not cost you as much. Once the bike crashes without any more coconuts to spare, it is game over.

Special items are scattered throughout the game for Wheeler to collect. Some items affect the multiplier, a system that determines the amount of points received from bike tricks. When an item increases the number on the multiplier, a small timer is activated within the box that only lasts for several seconds. During that time frame, any points acquired from tricks will be multiplied by the multiplier's number.

Another item, a special glowing coconut, shields the basket of the bike by placing a lid on it which lasts several seconds. Any damage received from crashing the bike, whether it be major or minor, will not result in the loss of coconuts.

Besides the occasional item, the major source of points reside within the tricks that can be executed on the bike. The tricks may appear challenging during the first couple of attempts, but decent practice should ease the process.

Wheelies- There are two tricks that can be performed in this category: wheelies and nose wheelies. Wheelies are accomplished by carefully balancing the bike on its hind wheel for a second or more. Nose wheelies are just the same, only that the bike is being balanced on its front wheel.

180s (or above)- This trick is relatively simple compared to the other ones. While the bike is airborne, press the space bar once and successfully land for a 180. Additionally, pressing the space bar multiple times will enhance the trick accordingly. For example, 180 is added for each time the space bar is pressed. So a trick such as a 540 will require it to be pressed three times.

Flips- Both the front flip and back flip are easy to mess up if they are not executed correctly. Not only is it important to gain enough speed, but to be aware of whether or not the location is suitable for landing. When airborne, press and hold either the left or right arrow key to rotate the bike into a full rotation.

Tricks are also able to be combined to score higher points. Practice finding a sequence which deals a decent amount of points and is comfortable to carry out on the bike.

For those who are unable to score large amounts of points within a level, there is a strategy that should make the task much easier to accomplish. During a level, make sure you have a reasonable amount of coconuts on hand. Begin doing tricks with the bike carefully and be aware of the timer. As the timer is nearing zero, stop the bike if it isn't already by pressing the down arrow key. Press the right arrow key to bring the bike to a nose wheelie and slowly continue doing so until Wheeler hits the ground. If done correctly, only one coconut should have been lost. The level should restart itself at the beginning again, so resume doing tricks and repeat the aforementioned process. When only a couple coconuts remain, or there are none left, finish the level and proceed to the next one to restock your supply.

Below are a couple of additional tips to keep in mind:

Wheeler's Wild Ride lives up to its name to say the least. This is one of those games that people either like or dislike for various reasons. Gamers on the more casual side may not prefer to play this game as much as a more outgoing gamer would. That doesn't mean it isn't worth to check out and play though. You may actually find yourself to be more skilled at it than you thought!