In this game you play a Turtum trying to hit the bullseye with your arrows. You have a total of 10 shots to take! Get ready to aim and shoot! 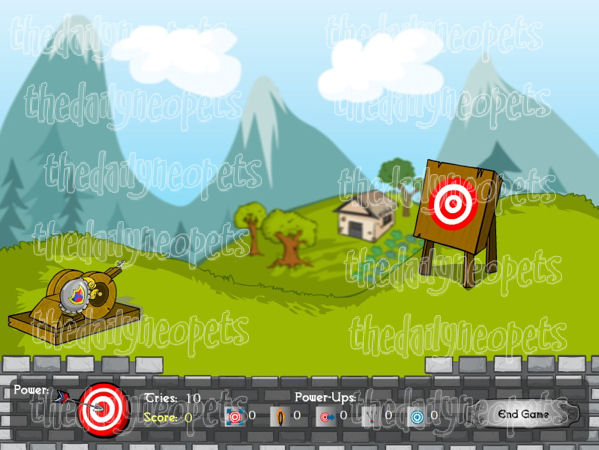 In this game you goal is to hit the target. You will use your up arrow to move the arrow up and the down arrow to move your arrow down. Holding the space bar down gives you your power. The picture of the bullseye at the bottom left of the screen labeled power will show you in yellow how much power you have. The more yellow the more power. Missing the target or hitting the wood around the target gives you no points. The outside red ring is worth one point, the next ring working you way to the middle is white and worth 2 points, then is red again worth 3 points, white worth 5 points, and the bullseye is worth 10 points.

Power Ups can greatly improve your score in the game. The first power up on the bar of power ups is the bouncing bull. This power up makes the target increase in size and reduce in size repeatedly. It can be nice because it makes the bullseye bigger, and making it easier to hit!

The fire hoop power up makes a fire hoop between you and the target. You will now need to try to shoot through the fire hoop and hit the target. If you are successful at this you will get double the points for whatever area of the target you land on.

The moving target can be difficult to hit. The target simply moves left and right making it a bit harder to hit. With a lot of practice you can get the timing down right so you can hit the target.

The three shots power up gives you three arrows at once to shot, rather than just one. The middle arrow will go just like it would if it was the only arrow. This can be rather helpful when you have things such as balloons or hoops to shot as well as the target. More arrows gives you a better chance to hit the other stuff too.

The inverted target does just that. It inverts the amount of points the areas are worth. The wood section around the target is now worth 10 points and the bullseye is worth no points. The ones in between are also inverted. This can be helpful because the area around the target can be much easier to hit than the small bullseye in the middle.

In the game you will find other things to hit besides the target itself. There are two balloons that randomly show up while playing and Punchbag Bob may show up with an apple on his head. It is possible for multiple things to show up at the same time.

Punchbag Bob himself is worth only 5 points. The apple on top of his head is worth 20 points. So you goal is to hit the apple, but he is also worth points so if the apple is too hard and you hit him you still get some points for him. 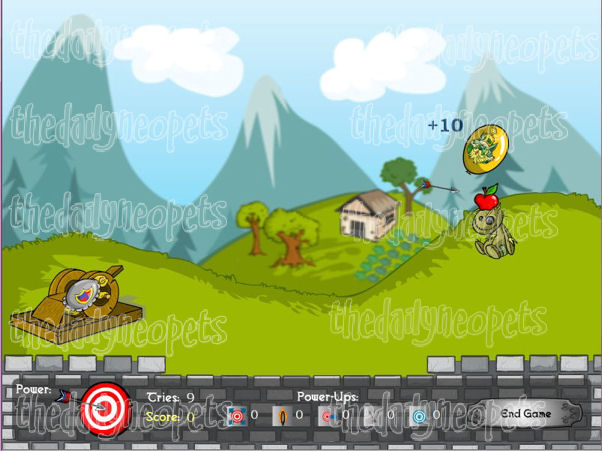 Here are some useful points to keep in mind when playing Ultimate Bullseye:

This game requires a lot of practice. The more you practice the better you get. It takes a little time to get used to knowing how much power to use and where to aim your arrows. Remember to use your power ups, the catapult code, and take your time. With a lot of practice you can get that lovely avatar before you know it!