In Tug 'O' War, you play against multiple opponents in a tournament. Your ultimate goal is to pull every single one of your opponents into the river. After doing so, you'll be the ultimate Tug 'O' War champion! Can you do it? :)

The controls are really simple - press A to pull your opponent!

During actual gameplay, at the top of your screen there is a timer for Super Pull Mode. When Super Pull Mode is activated, both opponents are locked into their positions. A series of letters (A, S, D, W) will appear and you need to enter them in the right order. If you get all of them right AND enter them in faster than your opponent, you will do a "super pull" and pull your opponent an exceptional distance! 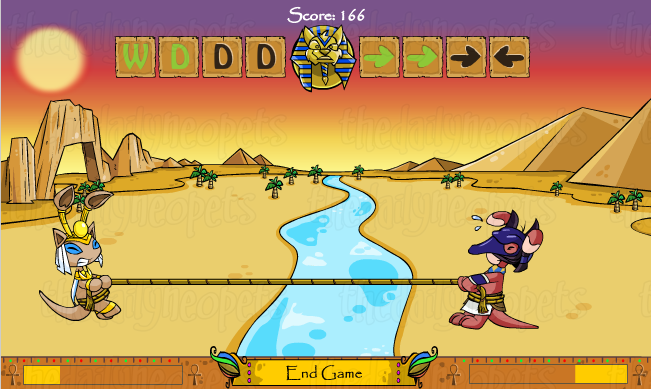 At the bottom of your screen, there is a Rage Meter which is increased every time your opponent pulls on you. When your Rage Meter is all the way full, you can press the W key and it will daze your opponent for a brief few seconds. This will allow you to continue to pull your opponent without resistance.

The maximum score you can make in this game is 4200, and the key to reaching it is to be as fast as possible. Play on a fast computer and press keys as quickly as you can. There's little to it beyond that.

To make the best use of your Rage Meter, be constantly watching it. In the very first rounds, you won't use it much (if at all) because the first challengers don't fight back enough to build your rage. But your Rage Meter is crucial when battling Truggdon and the Jetsam. As soon as you see your meter full, hit W and then spam A to get as many pulls in as possible while they're dazed.

The Jetsam types unbelievably quickly when Super Pull Mode is activated. It's nearly impossible to think and type in the letters as they appear, so instead just mash on the A, S, D, W keys as fast as you can. Keep doing this, and once you have beaten the super hard Jetsam, you've won the tournament!

The revamp of this game was sorely needed and surely pleases all old and new fans of the game. Using the tips given in this article, you might even be able to get a trophy!