Deep within the Haunted Woods resides a gypsy camp with several mysterious wagons. One wagon in particular, however, is unlike the rest. Upon closer inspection, the wagon is actually a shooting gallery! Step right up and load the cork gun, for it is now time to do some Haunted Shootery.

A mouse is all that is required to take aim with the cork gun. Using the crosshair, the player must take aim on targets and shoot them by pressing the left-mouse button. This process continues for 3 levels, with each one becoming progressively faster as targets come and go. The game does not end until all 3 lives are lost or the Blathering Beech is defeated. 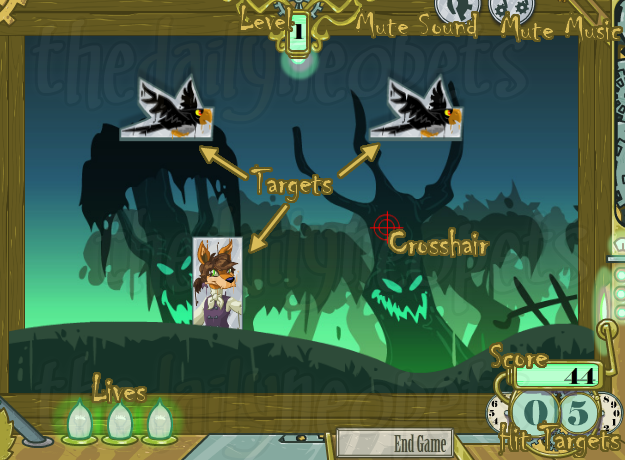 Level- The ticker at the top of the screen indicates what level the player is on (there are three of them).
Mute Sound- This button mutes the game's sound effects.
Mute Music- This button mutes the game's music.
Crosshair- The crosshair is what the player uses to shoot the targets.
Score- The amount points the player currently has, which can be earned by shooting the targets.
Lives- The light bulbs represent the lives the player has, which is three.
Hit Targets- This ticker represents how many targets the player has shot.
Targets- Targets are the main priority in the game. With the exception of one type of target, it is the player's job to shoot them all down. Below is a chart explaining the targets:

The Haunted Shootery is an extremely straightforward game that only requires the accurate click of a mouse on targets. Therefore, that is not a real strategy one could go by. However, there are several tips that can be useful:

The Haunted Shootery is a quick and simple flash game that is easy to earn a decent amount of Neopoints in. Why not give it a shot?