Spinacles, in my opinion, is probably Neopets' most unique game concept at the time of writing. It brings a whole new feel to mediocre "clearing the board" games; Spinacles has a Tetris feel, but instead of blocks that accumulate upward, they expand outward. The blocks rotate freely on a central axle.

In this game, you'll be using your mouse for everything. There are two colored spheres that are displayed at the top of your screen: your "active" sphere and "queued" sphere. Press space to switch them (you can do so as many times as you'd like). Point your mouse in the direction that you'd like to fire your sphere (and obviously, click to fire). You can bounce spheres off the edge of the screen.

To the right of your active and queued sphere, there are five smaller gray spheres. This number is the amount of "misses" you have left before more spheres are added to the level ("miss meter"). For example, if you fire a sphere and it doesn't clear any spheres off the screen (no combo), that's considered a "miss." Obviously, having more spheres being added is not desirable, but it will happen. 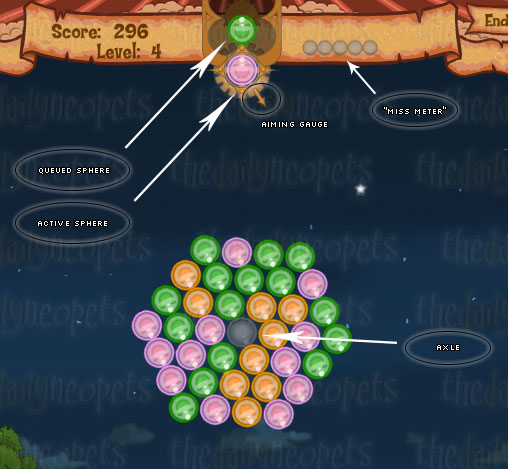 There are multiple bonuses that will appear in Spinacles:

Try and create combos in a row. For every combo that you do, the spheres contained in your next combo will increase by a point value of 1. So, let's say you clear three red spheres. In your next shot, let's say you clear four spheres; those four spheres in the second combo would be worth 2 points each (instead of one). If you did another combo, those spheres would be worth 3 points each (and so on). These combos however must be in a row without a "miss" in between combos.

Bombs destroy this "combo chain" unfortunately; the spheres cleared by bombs will be worth only 1 point even if you have a combo chain going.

Go for the center. Obviously, at the beginning of each level you're going to have to work with the perimeter. But as you do more combos, begin looking for combos more toward the center axle. If you destroy a sphere close to the axle, spheres that are attached will fall too, even though they may not be "apart" of the combo or of the same color.

Throw away a sphere when you need to. You can fire a sphere at a certain angle where it will never touch the center spheres. After hitting the edge of the screen 10 times or so, the sphere will disappear; beware that this will count as a miss though. This strategy is useful when you have just a couple of spheres left, but your active or queued sphere is a totally different, new color.

Use bombs wisely. Like I have already said, they destroy your combo chain and only give +1 per block destroyed. Bombs can be particularly helpful when you have spheres that are in danger of touching the edge of the screen (when things get out of control). Again, aim toward the "base" or "center" of whatever you're trying to destroy and the rest will fall with it.

Alternatively, you can "build up" spheres and not clear them until you absolutely have to. This will cause the level to last longer, resulting in more points. This strategy can be useful on the easier levels, but is difficult to do on harder levels.

Don't worry if you don't get the hang of this game at first; it's a relatively new concept. Beware that, once you do get the hang of it, Spinacles is very addictive. Be sure to take frequent breaks so you can give your brain a rest. ;)