In this winter-themed game, you play a Polarchuck named Dieter. For reasons unknown, this little fellow has a thing for munching snow (hence the title of the game). In each level, you get to help him munch his way through stacks of colorful snow, picking up gems, sipping potions, and avoiding terrible beasties on his way!

Use your arrow keys to move Dieter around, then use the spacebar to munch all that delightful colored snow!

Your general progress in the game should be in a downward direction; the object is to reach the bottom of each level before time runs out. To move up and down blocks from left to right, press the corresponding arrow key in the direction you want to go. Dieter can go down as many blocks as he wants, but he can only climb up one block at a time; he's not tall enough to go any higher! To munch a block, make sure Dieter is in the space next to it and facing it, and press your spacebar. If you need to munch a block above or below Dieter, press the arrow key in the direction to make him face it. When he's facing you, he can munch down, and when his back is to you he can munch up. 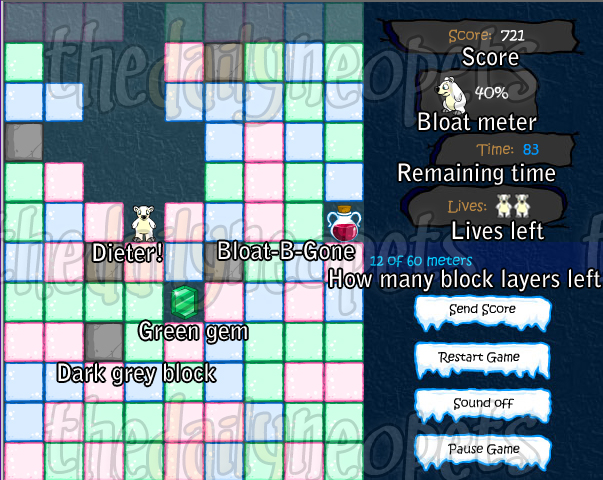 As you progress through the levels, you will see more and more colors of snow. When Dieter munches one block of a particular color, all blocks of that color that are touching it (horizontally or vertically, not diagonally) will also disappear! You receive one point for every block munched. If blocks fall because of your munching, and land next to other blocks of the same color forming groups of four or more, they will disappear, too.

Watch out for dark grey blocks; these dirty looking things take two bites, filling up your bloat meter (discussed later), faster. But they still only earn you one point, not two.

Periodically, you'll see green gems taking up spaces. If you can make your way to them and collect them (by walking into them, not munching!), you can earn a whopping 100 points a piece getting you that much closer to the elusive avatar!

Clocks and various "gross foods", such as eyeballs, can be seen suspended in ice throughout the levels. The clocks, if munched, will earn you around 20 extra seconds in which to complete the level. The foods earn you a few points, but aren't worth risking Dieter's neck on.

There are a couple of things that little Dieter needs to look out for. And you're going to help him with that, right?

One of the biggest hazards you and your Polarchuck friend will face is falling snow. I'm not talking gentle, light fluffy snowflakes. I'm talking about giant colored snow blocks. Blocks without something beneath them will fall until they stick to other blocks of the same color, or land on another block. If you happen to be beneath one of these blocks when it falls, you'll get squished, and lose a life! Blocks hang in the air for a moment before they fall, so if you're paying attention, you an usually get out from beneath them in time.

Another hazard you'll meet is gas. Yes, I said gas. As you might imagine, eating all that snow makes Dieter start to feel a little sick. Each bite he takes increases his bloat meter by 5%. It doesn't matter if you munched one block or ten with that bite, the increase is still 5%. So it can often be in your best interests to munch large groups rather than single blocks. Watch out though, the dark grey blocks increase you 5% every time you bite it (twice). If you reach 100% on the bloat meter, then try to eat another block, Dieter will make a sad little groaning noise, and you will lose a life.

One way to help you avoid losing a life from bloating if you can't reach a potion bottle is to use a simple cheat. Type "buuuurrrrrrrrp" (that's 4 u's and 8 r's), and it will act like a potion; the bloat meter will go down 50%. You can only use this once per game, though, so don't waste it!

I can almost hear you crying out in despair. How could you possibly get through even one level without reaching 100% bloatedness? Fear not; there is hope! It comes in the form of a little bottle of red medicine. Sprinkled throughout the levels, there are bottles of a magic potion called Bloat-B-Gone. Moving onto the same space as one of these will decrease your bloat meter by 50%, (as well as giving you a point), making you free to continue munching.

Stuck in ice throughout some of the levels are Snow Wurms. If you release them, by removing the block beneath them, they will come after you! If they catch you, you will lose a life. The only way to get rid of these little beasts, besides running away, is to have another block land on them. They'll get squished just as easily as you would. When these wurms are released, they reveal purple gems, which are worth twice as much as the green ones, should you manage to get around the wurms to grab them.

Yet another hazard that you will encounter (goodness, there are a lot of them, aren't there?) is time. If the timer reaches zero before you reach the bottom of the level, you will lose a life and be forced to begin the level again.

Here are a few ideas to help you achieve that avatar score, and maybe even land yourself in the high score tables!

Try to stay in the middle of the screen until you see a potion, then move for it. Unless you dawdle, you should have plenty of time to reach the bottom, so don't rush. If blocks fall and create combos off-screen, you won't get the points, so rushing away will lose you easy points.

If you're having trouble on some of the higher levels, you may want to try this theory. When you are very nearly at the bottom of level two, wait there until your timer reaches zero, sending you back to the top. You will lose a life; your score, however, will not reset. Then you can cruise back through the easy level again before moving on.

Zen mode appears to be identical to normal mode, except that the points reset to zero whenever you lose a life, and when you reach the end of a level. So it doesn't look like you're going to be earning any Neopoints that way!

The best way to be successful with this game is to be aware of everything on the screen. Keep an eye on your bloat meter, and the blocks around you. Always know where potions are, and try your best to get those gems!