Everyone loves a good snowball fight. You scoop up the snow in your numb, blue hands, pet it into a ball and throw it with all your might at your friend. You dive to take cover behind the parked car as your opponent whacks one right in your face! Bullseye! The Neopets game isn't so different...

You use your mouse to control the Kougra around trying to hit his friends who are a Kyrii, a Scorchio, an Aisha and a friendly Meepit. Hit them to gain points but don't hit the faeries.

You can type snowghettiandmeatball to gain 10 extra snowballs at any point during the game.

To throw a snowball, you position the throw using your cursor and use the left mouse button to throw

It's a good idea to know what's going on as you play, so here's a brief overview of what you will see: 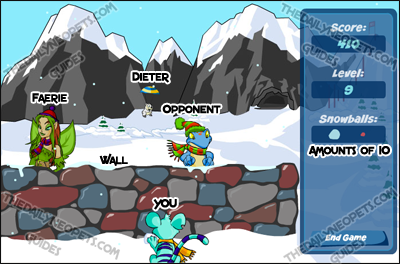 Those are the key things you need to pay attention to.

You are the Kougra. You don't need to worry about you, as you follow the cursor and your opponents don't throw snowballs at you. Great! What you need to know, however, is the position of the Kougra. He's infront of a wall before many possible layers of people.

The wall is a barrier for the opponents to hide behind. Although it doesn't provide them any protection when they are running around like lunatics above the wall, it does when they don't appear. You need to position your cursor over the top of this wall to be in with a chance of actually scoring points. Hitting the wall does make the "Swoosh" sound as it does when it hits an opponent, but you don't score any points.

Your opponents are a Kyrii, a Scorchio, an Aisha and a Meepit. The Neopets score you 5 points for a body hit and 10 points for a shot in their face (you get rewarded for being mean!). The only Petpet in the game, the Meepit, gives you 10 points for a body hit and 20 points for a face hit. Hitting the faeries get you no points at all, and take 10 snowballs off of you for hitting them. You might ask what they are doing there in the first place, but the game would just be too easy without them. On the later levels, they move faster, stay up for a shorter time, and overlap each other. Typically, the Meepit is always at the back, the Neopets in the middle and the faeries at the front. So, at the later levels when this happens, you're stuck.

) can be seen parachuting down at random points in the game. Hit him with a snowball and you get 10 more! He only shows up when you have 40 or less snowballs. To hit him, throw a snowball into the wind (click the opposite side to where the snow is flowing to) and about halfway between the top of the wall and the top of the screen. When you see him, click! Also, make sure that there are no faeries in the way to block your shot and take 10 snowballs away, as it could end your game. If you are running low on snowballs, be wary of the Neopets and Petpets in the way, too.

Keep an eye on the snowball count, too. You don't want to hit willy-nilly and find out your game has ended, do you. Each complete snowball is equal to 10 throwable snowballs, and the snowball melts as the 10 goes down to 1. It turns red once you've got very few left for that 10. If you are on 10 snowballs or less, don't try and hit any pets or the meepit, just aim for getting a clear shot at the Polarchuck. There isn't a time limit on this game, so take as long as you need. If you've got 30 snowballs or more, just shoot everything. The odd faerie won't to too much damage then. Remember, the Polarchuck only appears when you have 40 or less snowballs.

Guess what. The Phantom Orange Shirt Guy strikes again in this game! He appears randomly when you play the game and if you hit him, you get 50 points. Also, at the title screen, click the orange thing at the top of the ski-slope. ;)

Leaving the game window open for a certain amount of time awakens the snow beast and he comes out of the caves if you haven't started a game. Like the Lair of the Beast, he is there to scare you. You have been warned!

A lack of snow my hinder your chances of having a decent snowball fight but this game means you can play all day everyday! Good times for all (and minus the numb hands!)