Take the role of a grundo defending his snow men from the invading lupes and catapult wielding Snow Beasts. Snow Wars II is the hyped up version of it's predecessor, Snow Wars, which was a battleship incarnation. This is a flash game of strategy and mouse accuracy.

There are three phases to the game, starting with "Build Walls" phase. It's followed by the "Place Catapults!" phase and lastly the "Attack" phase before it repeats. There is a set timer, seen in the top right of the screen, that tells you how long it is until the next phase. If you do not have a snowman surrounded with a fort during the "Build Walls" phase, you lose the game. 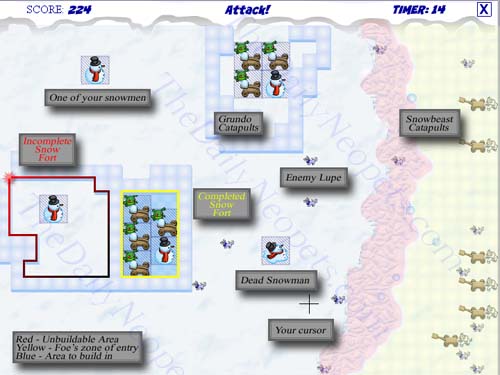 I've highlighted the three areas of the game where you can place ice blocks, where you can't in the rough snow ditch, and lastly in yellow the area where the enemies appear at the start of every round. The various objects that appear are labeled, as well as two examples of snow forts. The one in the back was not completed because of the break in the blocks marked clearly. You may notice a set of Grundo Catapults in a destroyed fort, they become unoperable if it is not a complete fort. So if that happens, you have to make sure to repair the fort in the next phase. However, if this happens while you are in your Attack! phase, you can continue to fire until the time runs out and you enter your next phase.

Each Lupe is worth 5 points, and each ice block the Snow Beasts knock downgives you 1 point. When you complete a fortress, you get twice the amount of points for the area you surrounded. If 14 blocks of area turn blue (when you surround them) you would then get 28 points.

In the first phase, "Build Walls," you have red outlines of shapes, pressing the space bar rotates the shape, and clicking will place down that shape of ice blocks. You cannot place blocks over each other, and you will hear a buzzer when that happens to let you know that you can't. You can create forts that don't have snowmen in them at all, which will take on the checkered blue pattern of being a completed snow fort.

When building your forts, there are various strategies to take on, especially at the start of a game. You have to try and build forts large enough to take in Grundo Catapults that you will place in the next phase. Since the catapults take up a 2x2 square of ice blocks, you should build with that in mind.

During the next phase "Place Catapults!" you have to place down a Grundo Catapult from which you will fire off your shots. Something you must keep in mind is that they can only fire one shot at a time, and cannot fire again until that snowball it fired off lands. Place them closer to the enemy so that your shots don't take a long time in traveling.

The next phase is the attack phase, and you'll have to place your cursor over enemies to fire at them by clicking on them. The catapult will then fire off a snowball at the spot you just clicked. Always target out the nearest Snow Beast Catapults, as they will be taking out your fortress and destroying your work from the first phase.

After your first round, I suggest repairing your fortress and then creating a new set of lines to make it bigger. Let's say your first fortress was a 10x15 grid, begin building a line from the thin side (the side that's only 10 squares wide) to extend the grid to be 15x20. It doesn't matter if you don't turn the 10x15 grid into a 15x20 grid right then and there, as in the next round you'll already have one or two walls built and you can just finish it up. The bigger your fortress is, the more points you score and the more catapults you get to place.

One way to start though, is machine gun (aka, rapidly click) the mouse button while dragging it in a direction. This will place blocks in a rapid, if misshapen way, in a general line. You could create a large fortress early on and quickly expand from it. Then later on you spend your time solely on patching up the broken areas. Just make sure that as you near your last five seconds you patch up any little holes so that you have a complete fortress. However, on later levels you cannot do this as the shapes are in exotic configurations which need to be rotated properly.

Another tip that may help you is when you're starting out, try and surround more than one snowman on your very first turn. It can help you get more points! Just a thought.

These are the advanced strategies most players employ. The catapults fire in order that you placed them down. So, keeping that in mind, placing your first three catapults in the middle, the next three at the top, and the next three at the bottom, you can fire off your first three shots in the middle area, swing up and fire three more and then back all the way to the bottom to fire. This decreases travel time for each shot, allowing for more shots per attack phase. You could vary it to your tastes and have three at the top first, then three in the middle and three on the bottom. It's all based on your style, as you could go down three shots at a time. The reason to use three, is that it allows for a better rhythm.

Another thing to keep in mind is that most often Lupes will move straight forward, so it may be useful to fire a shot in front of the lupe so it lands on them after they move. They at time move sideways, so you may wish to fire toward one side of the Lupe.

Your strongest point is speed in this game, and that can be improved upon by playing the game often. Practice, andexperience will give you a better idea of how to proceed. This guide can't teach you how to decided when you don't have time to build a bigger fort and settle for something smaller (sometimes even sacrificing placed catapults) for the sake of living on to the next round.