Did you like Attack of the Slorgs? Do you want to be a space adventurer in charge of repelling slugs? If the answer is yes to both questions, this is the game for you. Just don't expect to get another Slorg-related avatar out of it. 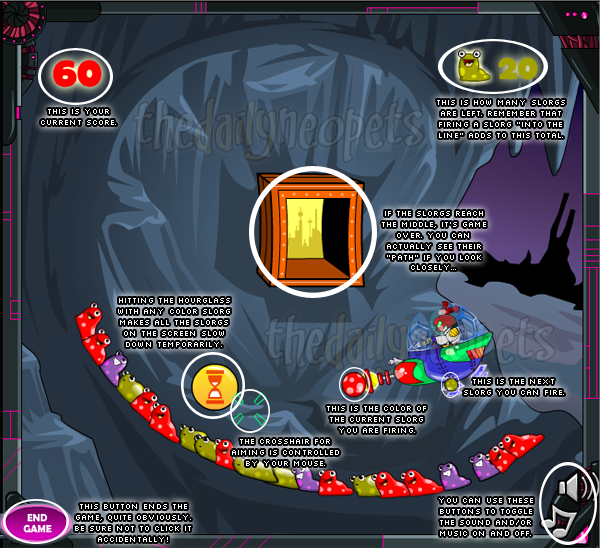 As shown in the screenie above, you're the Grundo in the spaceship. This game is played with only the mouse. The crosshair is moved by moving your mouse (quite obviously), and you click to fire the Slorg you have. If three or more of the same color Slorg are in a row, they disappear and yield points. Simple enough, right?

The line of Slorgs are constantly moving forward around a spiral (which is actually partially visible in the screenie above), and if they reach the center (the box in the above screenie), you lose the game. You don't have three lives, so be careful!

There are two power-ups in the game. The first is a rainbow Slorg for you to fire. This comes up randomly as the Slorg you're about to fire. It changes to the color of the Slorg it lands next to when you fire it. However, if it lands between two Slorgs, it'll change to the color of the Slorg it hits first. The second power-up (pictured in the screenie above) is an hourglass. At random times, it will "float" across the screen. If you fire a Slorg at it (and hit it, of course), all the Slorgs in the line will slow down temporarily. It's instrumental to winning in the later levels.

You have to remember that your primary goal is to earn the most points - not win the most levels. For instance, it's actually possible to get over 3000 points in the first level alone. It's best to earn as many points as you can in the early levels since the later levels (around level 5 and up) are very hard to complete.

The best way to earn points is through combos. In the example pictured below, you could fire a red Slorg at the other two. All three will disappear, and the green ones will collide. Those will also disappear and earn you even more points (they'll give extra points since it was in a combo). The combo can be more complex (longer) than this one, and the longer it is, the more points you get.

If you were to repel three Slorgs in the normal manner, you would get 60 points. If you do a simple combo with only two "groups" of three repelled, you get 60 + 60 + 100 bonus points. For every extra group, you get the 60 points (assuming it's a group of three) for the group plus 100 bonus points. Remember that this has to be within one fired Slorg.

This is amazingly simple, but make sure not to click the "End Game" button by mistake. It's a lot easier to accidentally press the button than you may think. Clicking on it immediately ends your game with no confirmation message.

Slorgs in Space puts a Neopian twist on a classic game, and it's simple yet challenging. You probably have heard it a million times before, but I'll say it again - practice makes perfect. If you have patience and concentrate, you'll be able to get a very high score *cough* assuming you don't go iNsANe first *cough*. Anyway, happy Slorg-repelling!