It's a bright sunny day in the land of Meridell - a perfect opportunity to enjoy a flight in your very own biplane. Unfortunately, some sky-pirates who happened to be in the area had the same idea, but with a very different definition of 'enjoy'. You will have to engage in a series of perilous dogfights, starting with the easiest of the mob and slowly advancing until you prove your worth as a real ace of Meridell.

You'll start off with your aircraft on the ground, facing an odd-looking red barn which marks the approximate centre of the playing area. Your opponent will be sitting in his plane over on the other (left) side of the barn. Above you will be a patch of blue sky, clear except for some clouds and the occasional Kiko Balloon. 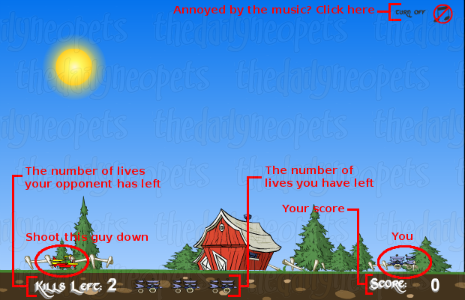 Once the round starts, both you and your opponent will start your planes' engines and begin rolling forward. It will take a while for you to get the lift you need to get off the ground - just hold down the right arrow key until you nose up and into the air.

Now the real challenge begins - your goal is to use your plane's pop-gun to destroy your opponent's plane until he runs out of lives. However, your opponent will be trying just as hard to take your plane out of commission. Use the right arrow key to bring your plane's nose up, and the left arrow key to drop it back down (of course, this is reversed if you're flying upside down). Pressing any of the keys on the bottom right of your keyboard (M , . /) will open fire with your pop-gun. The controls may seem a bit awkward at first, but it's not hard to get used to them. Also, it'll be useful to remember that the left and right sides of the combat area are connected - if you fly out the right side, you'll come back in through the left, and vice versa.

If your opponent manages to score a hit on your aircraft, or if you run into an obstacle (for example the barn) then your aircraft will be destroyed and you will lose a life. Your opponent will remain in the air while you will be returned to the ground and have to take off again. The opposite will happen if you manage to destroy your opponent or force him into an obstacle - he'll lose a life and have to take off again while you'll remain in the air.

The round ends when either you or your opponent runs out of lives. If you're victorious, then you'll move onto the next (tougher) sky-pirate. If not, well, better luck next time.

Every now and again a blimp shaped like a Kiko will drop into the screen from above. While they can be extremely irritating obstacles, there's a good side to these lumbering balloons - destroy their gas bags, and a random power-up will emerge. The baskets are pretty much indestructible though, and once separated from the gas bags they'll start to drop on their own, so watch your flight path!

The power-ups section of the in-game instructions does a good job of outlining what each power-up does, so let's take a look at it shall we?

Remember, lives are far more valuable than power-ups in any game, so if a power-up is too far out, don't get it! Your opponent could easily take the opportunity to slip in on your tail. On the other hand, a power-up only a few degrees off your current course is a great opportunity - who wouldn't want to grab a few extra points, improved aircraft performance, and/or maybe even an extra life? If you're confident enough, it might even be a good idea to let some of the easier enemies stay alive for a while so you can get more power-ups.

While this game isn't exactly complicated, there are a few basic things to keep in mind that should help you greatly once you're up in the air.

Just like in real air combat, the key to winning a Meridellian dogfight is to get on your opponent's tail and stay there for long enough to shoot him down. Engaging head-on is rarely a good choice, seeing as you'll regularly face opponents with greater range and firepower than your own. It's usually best to try and get a position on your opponent's tail immediately once the round begins. 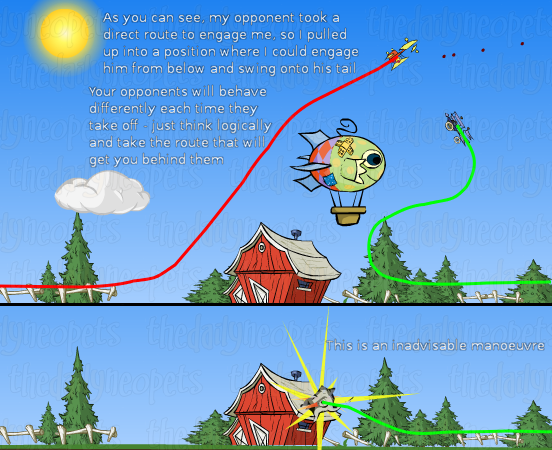 Due to their increased speed and agility, it will be much harder to predict the flight paths of your later opponents - you might have to improvise and alter your planned route if they suddenly change direction.

Another handy thing to remember is that it's a good idea to exploit the time your opponent has to spend on the ground when you shoot him down. While performing a victory roll sounds like a tempting option, it's probably a better choice to place your aircraft so that when he takes off, you're already on his tail. That way, you leave your opponent absolutely no space to breathe, keeping the advantage on your side the whole way through.

Of course, getting on your opponent's tail isn't everything - staying there is pretty important as well. Simply matching your opponent turn for turn might work all right on the earlier opponents, but later you'll come up against enemies that are far too agile for this tactic. Optimally, you should anticipate their movements and turn before they do so as to avoid being shaken off. However, this isn't always possible, so it's generally a good idea not to get too close behind the plane you're tailing - that way you have some room to turn in when your opponent tries to slip out of your sights.

Also, in the rare case that you find yourself too fast to tail your opponent properly, you can try flying your plane in a zigzag pattern to reduce your effective speed and avoid overshooting him.

It doesn't matter how good you are at hanging on, sooner or later your opponent is going to shake you off (either that or you'll need to go to the bathroom). Thankfully, your aircraft has a pop-gun which is highly effective at shredding enemy aeroplanes. The only problems with this gun are its very limited range and the fact that it only fires in short bursts. You most likely already have a firing style for this weapon which you're comfortable with, in which case you can skip this section - ultimately, the firing style you prefer is the one you should use. If you don't have a style you like yet, then I'll quickly introduce you to the two simplest ways to use the pop-gun.

The first firing technique basically involves sitting on your opponent's tail and holding down the fire button. Since there is no ammunition limit in the game, it works surprisingly well (you're bound to score a hit eventually) and it also allows you to focus on your maneuvering - a particularly useful trait against the more agile opponents.

On the other end of the scale, many Meridellian dogfighters prefer to carefully line up each burst, anticipating where their opponent will turn and firing so that their rounds intercept the target. This isn't as simple as it sounds, and it requires some concentration, but with some practice it can allow pilots to kill their opponents very quickly. It looks more professional as well. ;)

Your aircraft has a limit to how high it can go (represented by the top of the combat area). If you hit this flight ceiling, then your plane will 'bounce' back downwards at a fixed angle. While this can be a pain to new pilots, it's also an incredibly valuable flight characteristic that can be used to your advantage. Simply put, it gives you a way to make a very sharp turn instantly. Even better, the sky-pirates don't know how to use this particular trick, so go ahead and shove it in their faces as many times as you like. 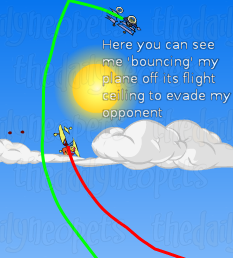 This tactic isn't only useful for getting a nasty opponent off your tail - it can also be employed while you're on the attack (e.g. to help you stay on your opponent if he makes a sharp turn downwards). Just be careful not to bounce yourself directly into your opponent's firing line!

During take-off and for a brief period shortly afterward (whether it's the beginning of the round or you've just been shot down), both your aircraft and your opponent's will appear to be blinking. For a precious few seconds a blinking plane is effectively invincible - enemy fire won't affect it for as long as the blinking lasts, while at the same time it can still shoot and take down an enemy.

It's important to take this into account, as attempting to shoot down your opponent during his 'blink time' will just be a waste of time and energy. You'll be better off trying to sneak onto his tail (while staying well away from his firing line).

However, if you are unfortunate enough to lose a life, you can use this blink time to your advantage. Daring manoeuvres of all sorts are perfectly safe while your plane is blinking - you can fly directly across your opponent's firing line, or even engage him head on if you wish. Just make sure you're not in his sights when the invincibility wears off.

Note: Despite the fact that you're immune to enemy fire during your blink time, flying into the ground or the barn is still a very bad idea.

Don't worry about clouds: Although they may momentarily block your view, the clouds in this game are relatively small - if your opponent disappears into them, he won't have the time to change his course before he emerges. Just keep a cool head and stay on him.

Kill your opponent directly: While you can win a round by forcing your opponent to crash (or staying out of his way until he does), you'll get more points by taking him out with your own gun. 20 points per kill to be exact. ;)

Position your hands comfortably: My personal preference is to use one hand for the arrow keys, and the other for firing using the 'M' key. I find that it lets me react faster and is generally more comfortable than using one hand for everything. However, different players have their own preferences for this - use whatever suits you best.

As you graduate to tougher and tougher opponents, you will eventually find yourself greatly outmatched in terms of speed, agility, firepower, and available lives, no matter how many power-ups you pick up. The only way to counter this is with your own skill, wits, and perhaps a little bit of luck. Remember, planes don't win dogfights - it's the people flying them that do. Good hunting pilot!