One of the most astounding features in the land of Shenkuu are its mountains. So naturally, every good warrior will want to hone their skills by climbing them. Among these warriors is The Emperor's princess. Take control of the determined Gnorbu as you quickly scale your way up along breathtaking, yet treacherous, mountains.

The controls for Shenkuu Warrior are very simple. All that the game requires you to do is to click the left mouse button after aiming at the desired ledge where you want the grappling hook to land. Your goal in this game is to carefully make your way up to the top of the mountain.

Shenkuu Warrior is a very fast-paced and time consuming game once you proceed to further levels. You will also find it much more difficult to keep your grip on ledges. This guide will explain several tips you can use in order to make the game easier. First off, let me show you how the game functions: 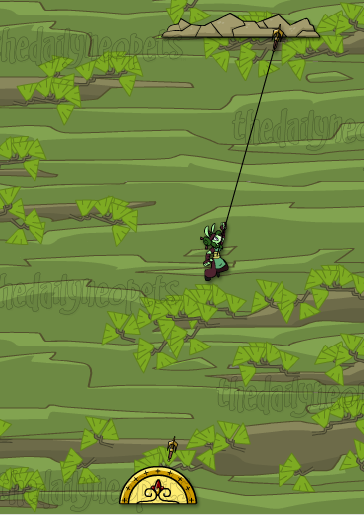 There are several things to note in the above screenshot. Ledges, as seen near the top of the image, are crucial if you want to proceed to the next level. Why? Because ledges are the only objects in the game that allow you to climb up the mountain. The device at the bottom of the screen is the next thing that I would like to point out. This follows your mouse on the screen and gives you an idea as to where your grappling hook will land. Also, to clear up any confusion, the grappling hook is released from the princess and not the device itself. Then of course, there is the princess. She is the character that you will be controlling throughout the game. Your main focus is to prevent her from falling off the screen while continuing onwards at the same time. Sounds pretty simple, right? If not, there isn't too much to worry about right now. Many players usually get a feel for the game rather quickly.

Now that the basics of Shenkuu Warrior have been gone over, it is time for some actual advice. Every time you proceed higher up the mountain, there are usually two ledges present on the screen at all times. If need be, it is a good idea to grab on to the nearest ledge repeatedly if you ever feel like you're going to fall and need to regain control of the princess.

At times, there may be an instance where the princess will bounce back and forth on the screen at a very fast speed. The best way to handle this situation is by using the same advice as before. Repeatedly grabbing a ledge will not only slow you down, but it will also help you accurately grab the next ledge.

Remember though, speed is certainly not everything when it comes to Shenkuu Warrior. While it may be easy to go fast during the first couple of levels, it will become increasingly difficult as time goes on. Patence during this game is a vital factor that should not be ignored. You should try whatever strategy works best for you. Whether it be going fast, slow, or even a mix of both!

Shenkuu Warrior is a very addicting and fun game that you should at least try. With enough practice, this game can give you 1,000 Neopoints every time you play depending on your skill level. Although frustrating at times, Shenkuu Warrior should not be overlooked.