In Shenkuu River Rush, you play as either Bowe (the Techo) or Cassile (the Lupe). Your goal is to race down the river as quick as possible, doing as many tricks as possible. After about 7 minutes there is no longer a time bonus. Between 7 and 8 minutes you will start to lose points from your overall score. So, do as many tricks as you can and surf fast!

Use the left (←) and right (→) arrow keys to navigate through the level. Press P at any time to pause the game. Also, you can use the ↓ arrow to slow down. To do a trick (one of the combinations below), first hold SHIFT then enter your combination. Your finger will be on the SHIFT button virtually the whole game.

There is a "trick queue" which means that when you're in the middle of doing a trick in mid air, you can still enter another trick. So let's say I was in the middle of Pygui Roll... while I am doing that long trick, I could press SHIFT ↓ ↓ to do Tomamu Tail Flare after it. Pressing SPACE in the middle of a trick cancels your trick queue and all future moves for that jump. Use this to your advantage, especially when you can see you're not going to be able to make another trick.

Additionally, once you get to the ramp where it displays "SPACEBAR x 2" on the screen, you can do "Double Jumps" after that point. This is very important. Press the Spacebar twice anywhere to do two jumps in a row (basically). 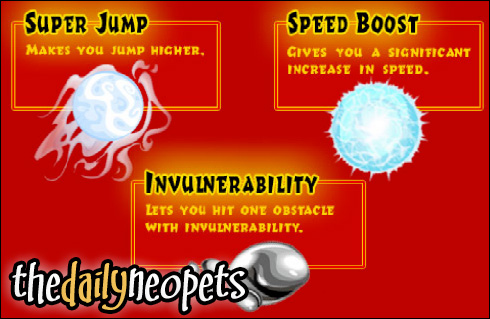 Neopets items can be bought at Wonderous Weaponry in Shenkuu or via the Shop Wizard. Then, you can equip these items to your pet and they will enhance your character. Items marked in red are most useful, orange is optional (not necessary to increase your score), and blue are NOT needed.

If you want a trophy for this game, send a score of 1999. When you score 2000 or greater points, your score will need to be reviewed by the Neopets Team before it goes through (this is to deter cheating). However, anything under 2000 will send instantly.

Never do two tricks in a row! This is because if you alternate them, your score multiplier will be higher. You'll notice in the video below that I am alternating between Tomamu Tail Flares and Whirling Kazerius. If I did just one of those tricks twice, I'd only get 3 points instead of 4.

Once you jump into mid air, be sure to hold the ↑ arrow. This will cause your jump to be longer and will allow you to perform more tricks.

Additionally, as you're treading through the water, press SPACEBAR and do a Tomamu Tail Flare for an extra point. After the Double Jump point, you can press SPACEBAR twice and do one Tomamu Tail Flare and one Whirling Kazeriu for a total of 4 points. Watch the video below for a demonstration run of Shenkuu River Rush (with items). This run is by all means NOT perfect, but it allows you to get an idea of how to maximize your points and ultimately earn more Neopoints.

Good luck and have fun on the huge RIVER RUSH! :)