Time to get your skates on! Try and impress those judges with your dancing-on-ice skills, as you play as a Bruce trying to audition for the Annual Happy Valley Skating Competition. Don your skates and start showing off those moves ;)

You play the Bruce, and you have to use your trusty old mouse to move around, in order to collect musical notes. Click on a point that you wish to go to an dthe Bruce will skate over there; but, the whole purpose of the game, is to do it in as little jumps (clicks) as possible. So don't click absent-mindedly; this will only score you less points.

In addition, you have to remember that you must avoid the 'flats' and 'sharps', both of which are notes that will not aid the sound you produce, or the score that the three judges will give you - which ultimately determines the score. 'Flats' and 'sharps' take away 2 from your score :(

Make sure that you don't fall into any cracks in the ice; you'll lose a life!

Here's the screen during gameplay: 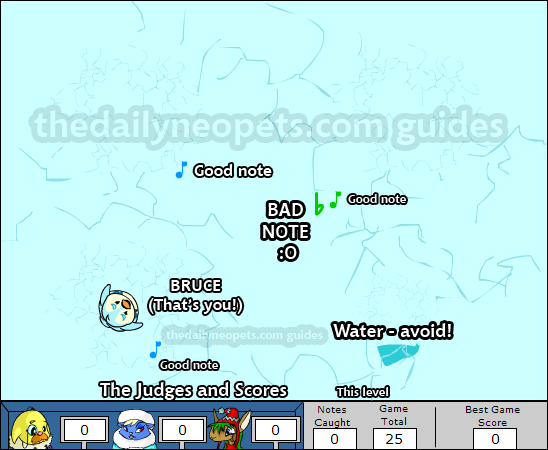 A really important tip is to make sure that you click minimally and you click on the other side of the screen.That way, you can pick up more than two notes - hopefully - and you'll get more points. If you stand still and a note flies over you, you won't get it, so always be on the move :)

If you go nice and fast, you'll usually skate right over the water, so don't be majorlly concerned about it; however, just don't land on it. Always try to stick to the ice!

The water locations are always the same for each game, so remembering where they are might help you a little. In each level, you have 30 notes to collect; 30 jumps, therefore, will be great - if you get every note within that. After those 30 jumps, they will start going against your favor in regards to the judge's scores.

Level One - to win this level, you'll need a judge's score of 20. There is no water in this one, so it's easy-peasy. Even the worst will get through this one ;)

Level Two - to win here, you'll need a score of 21. You have a few water holes to deal with, but it's not much of a problem.

Level Three - Argh! The water increases a load here, so be careful. There are big holes, and it'll be hard to get across some of them. To win, get a score of 22.

Level Four - there's plenty of water here, and the remaining ice will start to float around :( It's not a fast process, but be sure the ice is likely to be where you're headed whilst you plan your moves. To win, score 23.

Levels 5 Onwards - from now on, its pretty much similar to level four. The difference is that you'll need a higher score from those judges, and the ice will still move around frustratingly. It doesn't get much faster, so that's okay, but plan carefully.

Happy rink running ;) Remember to go straight across the screen to get more of the notes. Avoid water, avoid bad notes. If there's notes close to you, and it may be risky to go for the ones far away, feel free to make some small jumps. Soo you'll get that trophy - have fun!