Welcome to Neoquest II! If you thought the first version of this game was a breeze, you're in for a rude awakening. NQ II is bigger and badder than its predecessor with all new monsters, NPC's (Non-Player Characters), weapons, and companions! ...Er, sorry about that. I just felt the urge to scare you. It isn't that bad!

The game is divided into 3 difficulties: Normal, EVIL, and InSaNe! In Evil, the cost of items increases along with the HP of monsters and bosses. InSaNe is even harder because along with another heavy increase in cost and HP of monsters, if you die you are returned to the beginning of the game, so be very careful. To play on a certain difficulty, you must beat the one before it (except for Normal of course).

You play Rohane, a young Blumaroo from Meridell. It is quite easy to control him; just use the Nav Pad on your right. Very self-explanatory: it will move you one space in the direction you choose. Unlike NQ I, you only have two modes of traveling. Traveling in normal mode you will encounter an average amount of enemies, and in Hunting mode, you will find enemies more often. I recommend to use Hunting mode if you are training.

Another difference between NQ I and NQ II is that you will use more than one character! This is mainly because you could be attacked by four monsters at a time. You can pick up Mipsy (White River City), Talinia (Mountainside Inn), and Velm (Waset Village) at their respective locations. For the most part, Rohane will be your most constant attacker; Talinia will be a less powerful constant (possibly attacking the whole enemy group); Mipsy will use magic to speed up your party, slow down your opponent, and deal big damage; and Velm will be your group healer. Just in case you don't completely understand this yet, I will go more in-depth...now!

This is probably the most important aspect of the game. If you don't choose the right skills, you are going to have a very difficult time beating the game. I will list possible skills for each character and add some notes (basically the general accepted opinion =P) for each one. Each skill has 15 levels, so when I say "maxing out", it means take it to level 15.

As I previously stated, the game is divided into five acts: Meridell, Terror Mountain, Lost Desert, Haunted Woods, and Faerieland respectively. The acts each become more difficult. They also have an 'act boss', just a term for the final boss at the end of each act. The final boss in Faerieland is the last boss of the game and once you beat him, you win. You also get a fancy video without sound after the completion of each act!

It should be pretty easy to understand, but I'll have a screenshot just in case. 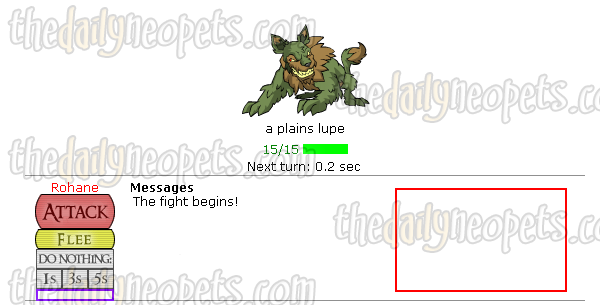 This of course is not a complete battle screenshot, as it was taken from the beginning of the game. The red box is where all the Magic Spells and Extra Attacks will go, once you have those skills. Attacks such as DD or haste will go here, for example. In the purple box (it will be expanded) will be the list of all your potions. Very simple, sorry you had to use your imagination for some of it.

Your battle from boss to boss will vary, but there is a specific pattern you should use to win. Use the first turn or so to speed up your party (if possible) and slow your opponent (again, if possible). For very difficult bosses like Hubrid Nox and Terask, make sure they are constantly slowed. Have Rohane use his melee attack, Mipsy use DD or GDD (if possible), Talinia use melee also since group attack is pointless (if possible), and have Velm group heal when necessary (do I need to say it again?). Use that and you are sure to win!

These prizes are a bit better than NQ I. Click on the image to see the weapon at the Battlepedia!

For maps of the lands, check out this guide

. Neoquest II is a time-consuming game, but can be fun once you get the hang of it. Now, go forth, build your party, and slay all the monsters in the land!