The Mystery Picture remains one of the harder games on Neopets. It's notoriously hard. So hard, in fact, that only 300 people get it each week - and that's on a very, very good week. But I digress! It can be done. With a keen eye, and lots of patience, you'll soon have a shiny trophy for your lookup, a rare item, and a share of 2 million Neopoints!

The Mystery Pic, quite basically, is a gigantic treasure hunt. Given is a 150 x 150 pixel image. Sounds easy, right? Oh, dear me. Absolutely not. While the image given is 150 x 150, it is a small portion of an image, blown up to fit the 150 x 150 pixel space. For this reason, and the fact that literally thousands of images have to be meticulously combed through, the Mystery Pic is quite the challenge.

One of the most crucial things to do when beginning the mystery pic is to resize the 150 x 150 picture. This can be done with most graphics programs - I recommend and use IrfanView, a freeware program downloadable from here. 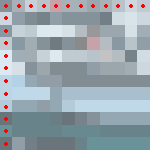 Copy the 150 x 150 image into IrfanView and count the 'original' pixels in it. If you count 12 x 12 (as it most commonly is), resize your image to 12 x 12 pixels. The results will be the 'original' picture, directly taken from its source.

Unarguably the hardest part of the Mystery Pic, the search is long, tedious and very hard work. The best thing you can do is to think logically. Are you going to find dark blues in firey images? Or greys in Maraqua?

As said above, images used in the Mystery Pic are taken from all around the Neopets.com website. Look in game banners, Petpets, backgrounds, TCGs, the Neopedia - wherever you look, look systematically, don't look around erratically. While you may hit the jackpot, you're more likely to find it if you conduct an organised search. Making a checklist of locations to search is a very good idea, as is finding help from a few close friends.

While finding help from friends is okay, sharing answers with them is not. Sharing answers is both logically and financially foolish - and against the rules.

Once you think you've found the source picture, check to see where the original picture fits exactly. Often, the colours are the same, but the picture itself is wrong. The Mystery Picture is answered much in the same way as the Lenny Conundrum - the answers have to be specific, but not too specific and not too vague. For example, if the answer was "Caption Contest #11", you would put "Caption Contest #11" and not "Caption Contest #11, where the Puppyblew and the Mazzew look at each other like o_O". In short, only put in the bare minimum, without being too vague.

The Mystery Pic, as frequently said above, is reputed to be one of the hardest games in Neopia. As much time and effort you put into the game, it's also about luck. However, there are usually boards dedicated to the Mystery Pic on the Games Chat (usually a little after the newest contest is announced in the news), where experienced players of the Mystery Pic chat and help each other out with the current puzzle.