Drop, Mootix, Drop! You are Harry the Mootix, an elite Petpet. You need to parachute down with courage, and resilience to complete your mission. Using brand new technology, your target landing space has been superimposed on the ground below you, so as to help you succeed in your job.

You'll need to master some of the tactics that any Commando needs throughout their career. Fighting the winds; learning to barrel roll; learning to land; and most of all, learning the art of patience.

Oh, and Harry is actually located in a NeoHome, as you shall see later.

To play the game, you'll need to use the Space Bar to launch Harry into his mission, and the arrow keys to guide Harry onto his target. The controls are really important in this game, and if you're not absolutely certain about them, play the game a few times before submitting a score.

You'll also need to learn how to do a barrel roll. You need to tap twice either the left or right key, depending on which way you wish to go, quickly, to achieve the roll's desired effect.

If you go through the center of a ring, you'll receive double points.

There are four difficulties - Easy (3 missions), Medium (4 missions), Hard (5 missions), and Insane (7 missions). The last two missions of Insane level are not really playable, however.

Here is an example, annotated, of the screen that you shall see. 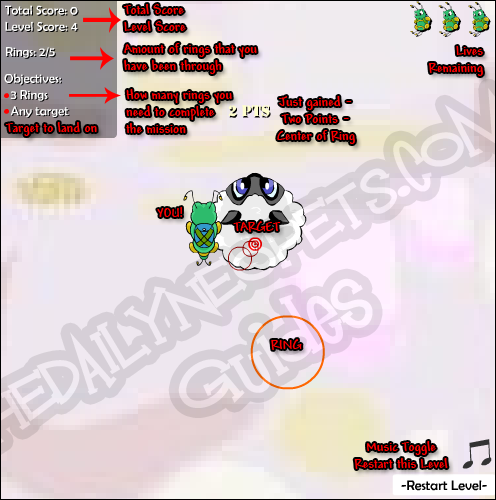 As soon as you set off, the rings start coming at you straight away. There is not much of a particular strategy that you can follow as you go down. You will need to go through at least the amount of rings necessary. Each ring is worth 2 points, and you will achieve a bonus 2 points if you go through the center of the ring. You will not lose out though if you didn't go through the center - as long as you get the correct amount, this is enough to pass the mission. If you are after the high NP, though, you will need to practice going through rings as this will be a major factor in getting a good amount of Neopoints in the Medium and Hard levels.

The Target. Oh, how so pretty. Of course, you have to overcome a slight snag to get there; actually landing on it. Our advice here would be to not get nervous about it. Getting nervous will just mean that you'll lose, get in a huff, never visit this site again, and go and get a travel ticket to come over and bash our server - so, just to be on the safe side, keep calm!

As you get closer, you'll see the targets. In later levels they move and become smaller, so make sure that you are able to master them! If you are new to the game, always try and get a bullseye on the center of the target. Once you feel that you have done well and can achieve this most of the time, then head for the smaller targets. The maximum you can receive is x5 on the large targets, and x7 on the smaller ones. As you get closer, don't go looking for smaller targets to see how big the number is - all small targets are x7.

As you get closer, start to position Harry above the target that you wish to land on. As the parachute opens, Harry will become misguided. After a few plays you'll start to notice this, as some wind from the opening of the parachute moves you into the center of the screen, regardless of where you are. You'll need to quickly set your landing path back to how you needed it, so as not to miss the target or lose control over Harry.

In later levels where there may be some rings that are harder to pass through, remember to use a Barrel Roll to move over quickly.

Single Drop Mode is good for practicing levels, but to be able to practice them, you'll have to have beaten them first. You can earn Neopoints here, but only for one level. It is best to stick to the 'Missions' to earn some cash.

There are the following amount of rings on each mission; it is the same for any difficulty.

You are actually playing in a NeoHome, which is rather funny. To prove this, if you click the Restart Level button - but don't click Restart Game or Send Score - and you will lose the mission. But carry on watching Harry - he will go down and when the parachute is released, he will bounce upwards, against gravity - you can then see that he is in fact in a room within a NeoHome! You'll notice this as you start up higher in later levels, though.

Even CHEATS you have to master, as you have to make sure that you get the right icons up. Practice first. To get each icon, press up, down, right, left to have them appear in the bottom right hand corner. Then get them in these orders to get the appropriate cheat!

Remember to start practicing your Barrel Rolls nice and early on. You may well need them in the higher levels.

In addition, keep nice and cool as you land Harry. This will aid you and once you have the hang of it, you'll be able to get those smaller targets and get a better score. The game can earn you a fair few Neopoints if you put your mind to it, but this is a game that you'll need to play daily in order to achieve those Neopoints.

The game is relatively easy, and hopefully you will now be able to follow a set strategy about how you take in each ring and pull the game off.