Kookia was introduced as a New Game Challenge in July 2010. Kookiths seem to have escaped and are all over Neopia now, it is your job to catch them!

The game is relatively simple to play. The only thing you'll need is your mouse, and optionally your keyboard. First let's see what our interface looks like. 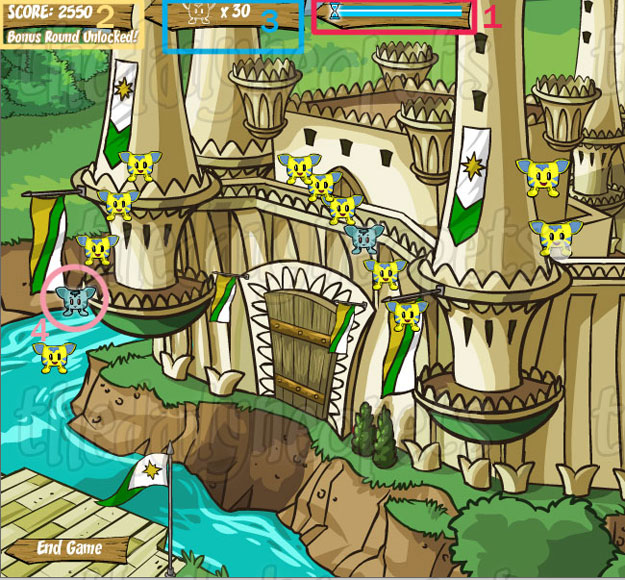 The main idea of the game is to catch all the Kookiths. You can catch a Kookith by moving your mouse over one. If you catch more than one Kookith within a certain time range, the score gets multiplied.

A Kookith is worth 10 points on easy, 50 on normal and 100 on hard. The difference between the levels is the speed of the Kookiths. Many people can easily beat the game on Easy, but will fail quickly at hard.

1. This is your Time Control Meter. It fills up as you catch more Kookiths and resets at the start of every level. You can use it by pressing Spacebar on your keyboard. It's function is simple: It slows down all the Kookiths for as long as it lasts, which is usually 3 seconds. While you won't use it as much on easy mode, it sure gets in handy for hard mode!

2. This is your score. Below your score you can see whether you unlocked a bonus level or not. Bonus levels are good for your score, and will be explained later on.

4. These are Ghost Kookiths. While the Kookiths change color depending on the level you're in, the Ghost Kookiths are in any level. You can only catch a Ghost Kookith by clicking on one. They are worth double the points of what normal Kookiths are worth. They do count towards your percentage of caught Kookiths, so the best you can do is click all the time when you see a batch of Kookiths being released in hope of catching it. Catching 3 of them or more will open up the bonus level. Bonus levels can come in quite handy as it comes to getting a good score. You unlock a bonus level if you have caught at least 3 Ghost Kookiths. Golden Kookiths will pop up at random spots in the screen. You will notice there will be two batches of these Golden Kookiths. They are worth as much as a normal Kookith.

The best way to score in bonus levels is by getting your multiplier up high. The Time Controller also works in these bonus levels, so don't hesitate to use it!

There are a total of 8 levels including boss fight. Yes, there will be an evil Mutant Kookith to fight. Here are the levels and their Kookiths. 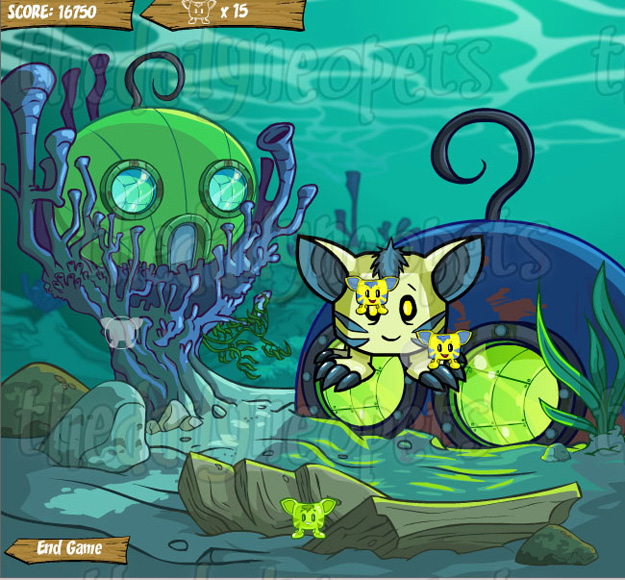 The mutant Kookith spits out random Kookiths, which move quickly into any direction. You will usually catch about 50% of these Kookiths, but don't worry, because it's the last level! Once you have tried to fend off the Kookiths, you have to click on the boss 5 times quickly. After that TNT will congratulate you and you can send your score.

Kookia is a fun little game to play... That is, if you don't get frustrated by the speediness of the Kookiths on hard level. After playing it a couple of times you will be able to recognize the patterns in which the Kookiths appear. Good luck playing!

Winning entry for "Hearts"!
Voting has started!
Click here to vote for your favourite entries!