Jumpin' Gem Heist, look at the instructions and it seems easy, right? Wrong! You only get 120 seconds here to get your points, and all you can use is your mouse. There is no way to pause the game, making it even harder. If you had as much time as you needed this game would be very easy, but sadly, it is not.

This game is played by using your mouse to move your Sandan across the bottom of the screen. It will follow your mouse, so try and get under carts with gems in them, then click to throw your stone. Move under gems to catch them, and avoid rocks that are not round and white. The round white rock that is not glowing you must catch, as every time you lose one you lose a life. Some carts will contain glowing white rocks, you can catch these also for a bonus or another rock. You only have 3 rocks, but you will keep them as long as you catch it. 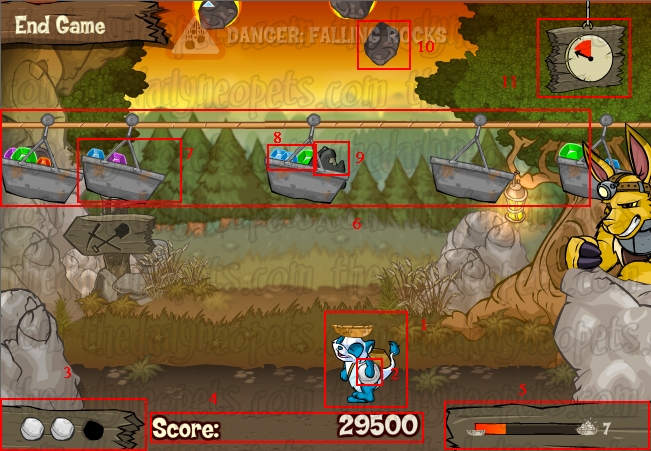 Here are some tips and hints that could come in handy.

The difficulty is not so agonizing that it is not fun, in fact, Jumpin' Gem Heist is a challenging kind of difficult (unlike Splat-a-Sloth). Once you've played a few times you should get the hang of it, if not, try, try, try again.