In this game, you play as two brothers Jolly and Olly battling an evil mutant Chia just to save their sister (Awwww). There are seven levels that you need to beat plus a boss to win the game. You mainly have to shoot enemies of your own colour while climbing up a huge tree. Everything about this game is awesome, even the music!

This game is fairly simple and you can even change your controls to suit your style. The default controls are the arrow keys to move, space bar to jump, and Z to switch between Olly and Jolly. Your main goal is to shoot all the enemies and pick up all the powerups in the level. This will get you the most points. 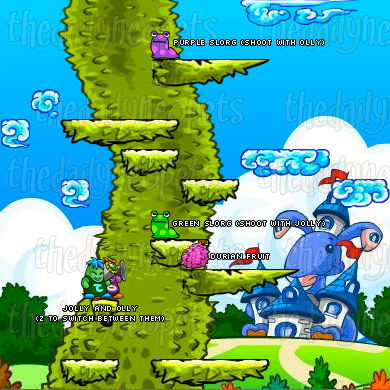 Every time you shoot an enemy, it drops some sort of item. None of these are bad so grab every one that you can. The most common drop is ammo, but there are still many other good things you can get. See below for all the different items you can pick up.

Enemies also drop durian fruits along the way! These are the most valuable items you can get. They give you lots of points!

There are three different kinds of enemies in this game. Each time you hit one, you get two points and each time they hit you you lose a quarter of your health. Both enemies come in green and purple and look a bit different in the game. What they are and what they do is described below.

There are two main things to keep in mind while you play Jolly Jugglers:

If you have a hard time jumping on platforms or clouds that are farther, be sure to move on the very edge of the platform where you are standing before jumping. Also, keep in mind that you cannot change your active character while jumping. Make changes accordingly to the enemy you are aiming at before jumping!

In order to completely beat the game and save Jolly and Olly's sister, you must defeat the evil mutant Chia boss. This boss is not too hard and you dont need to master any new skills in order to defeat him. Just jump around and avoid the lightning balls while shooting him at every chance you get. If you see any power ups, get them especially the sheild. This will give you 10 seconds of free shooting time and will make your attempt to defeat the Chia much easier and faster. The bonuses fall from the sky so they aren't that hard to get. 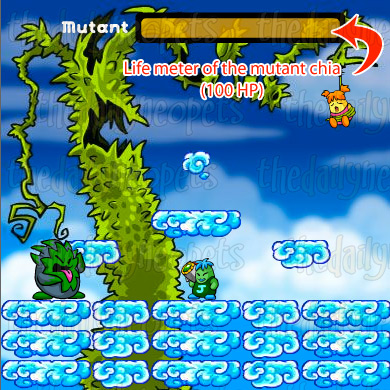 Did you know that after beating the boss you can still get some extra points? Although there is really no point for this unless you are trying to get the trophy and need a few more points because once you are at the boss you should have way more than enough points to get your 1000 neopoints. Anyways, right after you defeat the boss with your 100th shot, just continue shooting him. For every shot that hits him, you get 1 point.

Jolly Jugglers is a fun platform game that can easily earn you Neopoints once you master it! Have fun!