Invasion: Blastoids is your chance to take a walk in the shoes of the Space Faerie as she uses a ship equipped with Blastoids to destroy comets that threaten to destroy all of Neopia. No pressure, though.

The controls for Blastoids are easy and fairly reminiscent of Attack of the Slorgs. You use the mouse to move the ship and to aim. This moves the ship left and right across the bottom of the screen on an arched path. This means that you cannot shoot at a comet on the extreme edge of the game screen; the positioning will hinder you from doing so.

Blastoids fire in a straight line from your current position are launched when you click the left mouse button. Super blastoids can be used by clicking the space bar. 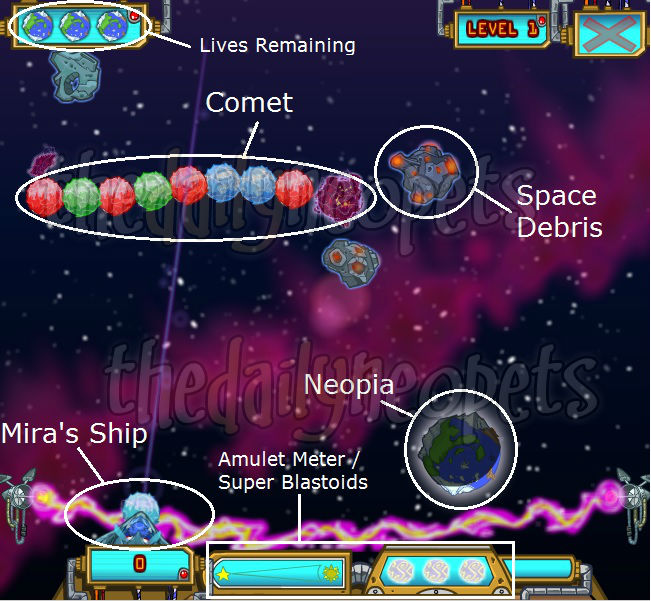 For veteran Neopians, Blastoids may seem fairly easy because it has a few combined elements that we may be used to from other games. The object of the game is to destroy the comets that threaten Neopia by firing blastoids (colored spheres) at them. If you connect three of the same color blastoid together, all of them disappear. Creating a combo of at least 5 blastoids at any time during a level gives you access to a Bonus Level, where you can rack up lots of additonal points and extra items. Let's face it, who doesn't love a bonus?

If a comet manages to make it to Neopia, all is lost, everyone perishes, it's the end of everything as we know it; absolute Neopian Apocalypse, but again no pressure!

The great thing is you have three lives, so that means three different chances to save Neopia. Thank your lucky stars. Every time you end the world, you lose a life. Lose three, then it really is the end and we have you to thank for no more free omelets; heh, just kidding.

Destroying sections of blastoids fills up your Amulet Meter and when it is full, this gives you access to a Super blastoid. Super blastoids destroy any color within a radius of where it lands. This is very useful for long comets with few like colors.

As you play, there will be obstacles in the way such as asteroids and other lovely space rocks and debris. If you happen to hit any of these, then your blastoid will explode and be useless. You also want to avoid hitting the head of the comet; this will also destroy your blastoid. Plasma is also a debilitating feature of the game, as it freezes the ship for a few seconds.

It isn't all bad, though! There are a few positive items you can grab, like Green Capsules and Red Planets. Shooting either of these items will not only give you an awesome score bonus, they'll also give your ship a neat effect!

Invasion: Blastoids starts out at a slow and steady pace, but will quickly speed it up as the levels progress. If you want to defend Neopia (and earn lots of Neopoints) you'll have to use your fast decision-making skills to keep the comets at bay.

Having trouble? Try playing Attack of the Slorgs

! The mechanics are similar, but the game is a little bit easier. Once you feel more comfortable, give this game another try.