Guess the Card is a luck/chance game. Everything is very simple: you choose one of the six given cards, and if the card you've chosen is the same card your pet has been thinking of, you win! :)

This game has no hi-score table and doesn't give out trophies. Though, for some reason, there are pictures for these trophies (you can see them above), but I've never seen anyone with trophies like these. Maybe a long, long time ago one could get trophies for this game, but now it's impossible, anyway. 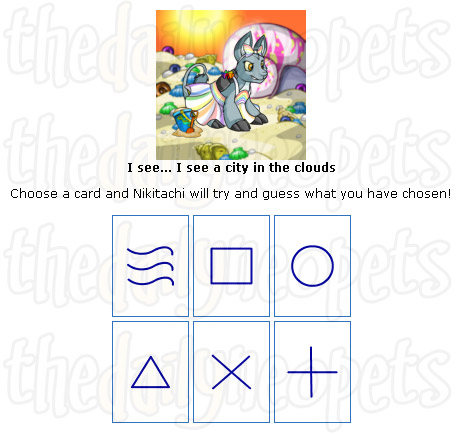 So, you have 6 cards to choose from, and if you win, you get 5 times as much as you paid. According to the theory of probability, if we assume that each card has an equal chance of being chosen by your pet, you should win once in six tries. So, if you play 6 times, you pay 60 NP and get 50 NP back (theoretically!) Does that mean that the game is not worth playing? Well, I decided to play 200 times to find out how many times I can win.

So, I played 200 times. Here is how many times my pet was thinking of each card:

The numbers are not perfectly equal, but they're close to it. I'm sure that if I play another 200 times, I'll get similar results, but they will be a bit different in any case. So there is no point in giving preference to some certain type of card, in my opinion.

My second strategy was choosing the card which my pet has just chosen before. Example: after choosing the card I see that my Nikitachi was thinking of a square - then I choose the square next time I play; if it's correct, I choose the square one more time, if it's incorrect, I choose the card that was actually correct, and so on. After playing 100 more times by using this strategy, I calculated my winnings and saw that I won 16 times. So, the new ratio is 16/100 instead of 15/100 - it's practically the same. But even 16/100 is less than 1/6, so I still lost some NP. And, none of those 31 total wins gave my pet any intelligence boost :( So, all I was playing for was losing 450 NP.

So, Guess the Card isn't a good way to earn NP. You may play it if you want to get a cheap intelligence boost, but I suggest you to read your pet some books instead :) However, you may play just for fun, or even compete with your friends. Find out who's psychic! :)