For your information: This game is not functioning at all for the majority of players. Here is a trick that has worked for the Chrome browser:
Step 1: Load Hannah and the Pirate Caves. Click to play and let the game load.

Step 2: WHILE HatPC is still open, bring up the Gourmet Club Bowls. Remember to keep the Hannah game up while you're doing this.

Here's where you have to play around with it a bit. I've had Club Bowls load the first time using this method. Other times, the error message pops up. If it does, click ok then reload the GCB pop-up play screen. RELOAD. DO NOT EXIT AND CLICK TO PLAY AGAIN. Repeat until the game loads. The most tries it took me was 4 the first time. Other times, it has worked the first try, or second try, but it can also take a few more tries. I'd say give it 10 tries, a few more if you're patient enough. From the people who have tried it in Chrome, we have been able to access the game. (Remember to have your shockwave player up to date as well).

Once the GCB game has loaded, you can then close Hannah, but will have to re-open her if you wish to re-load the GCB play screen. Hasn't been tested with other shockwave games, only Hannah and only in Chrome. If you find other combinations or browsers that work, please send in a ticket and let us know.

Another possible workaround is to load Club Bowls as usual. When the play screen pops up, copy the address from the popup into the "Click to Play" launch window. Submit the address and refresh until the game loads without an error. This has been reported as successful in a few cases.

Gourmet Club Bowls is a fairly simple game, but may seem a little intimidating to play. 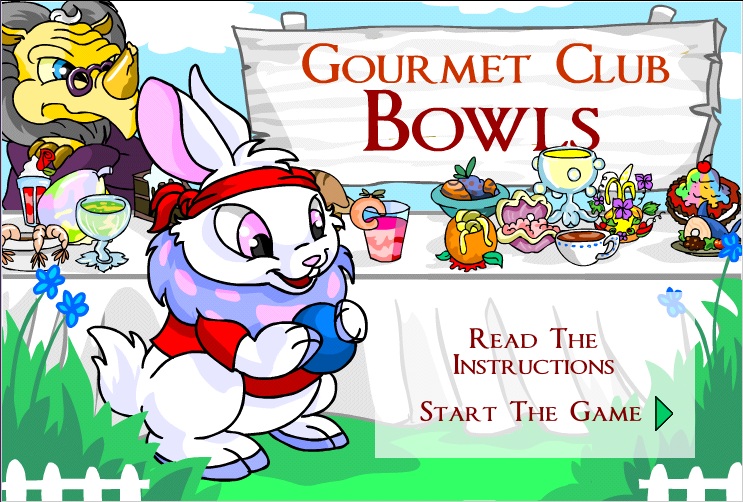 The basic objective of the game is that you (the Cybunny) have to throw your bowls in such a way to make sure, at the end of 4 alternating throws for each you and your opponent, that your red bowls are closest to the jack (the white ball).

In this game, you will be using your mouse and your left and right arrow keys. 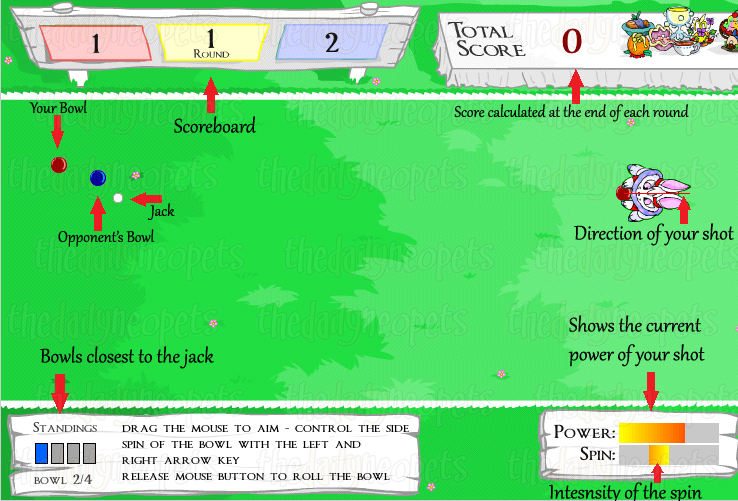 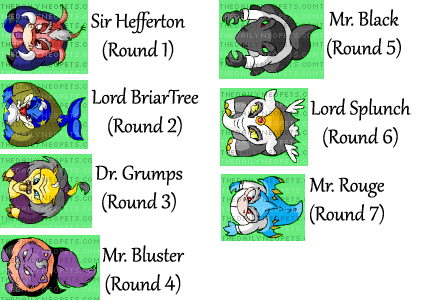 You don't have to rely just on good aim to get your bowls the closest. You can also knock into your opponents bowls, pushing them away from the jack, or even off the screen. Just make sure you don't knock the jack off the screen. Doing so will end the stage and your opponent will be awarded an automatic 2 points.

It's also worth noting here that, if you choose to use the spin feature, the spin does not start at the beginning of the shot. The more intense the spin, the sooner the bowl begins to arc.

As you move on in the game, a couple obstacles will appear on the course. There are 2 to watch out for:

The banana peel will cause your bowl to ricochet off, while the hole will swallow your bowl.

Below are the layouts of the 7 stages with their obstacles. Click to enlarge: 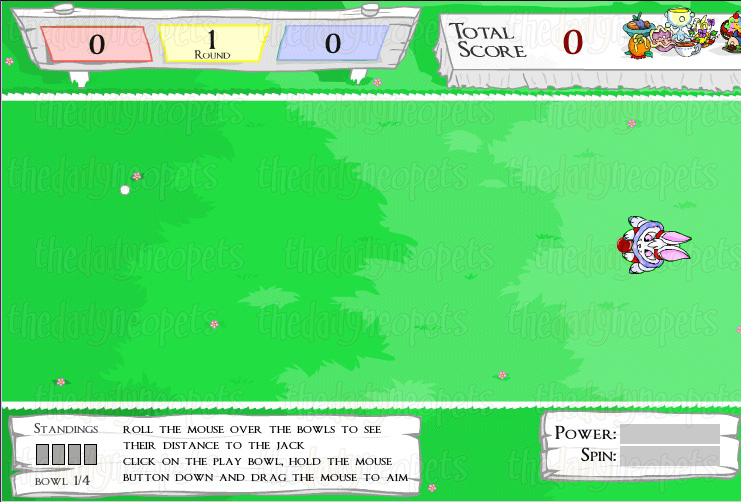 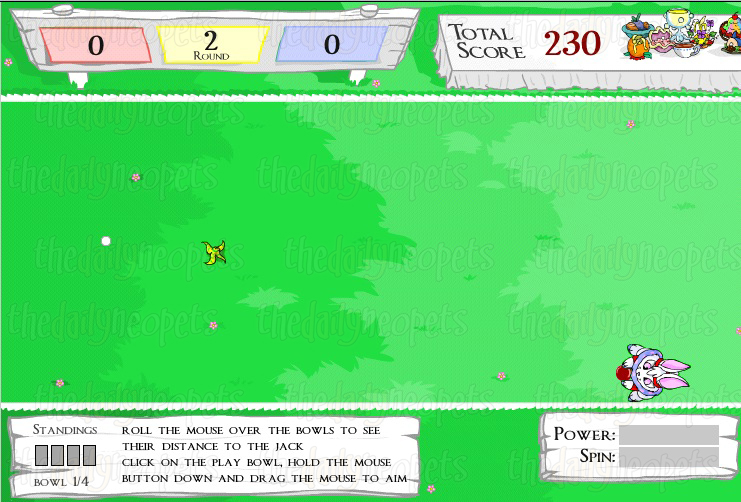 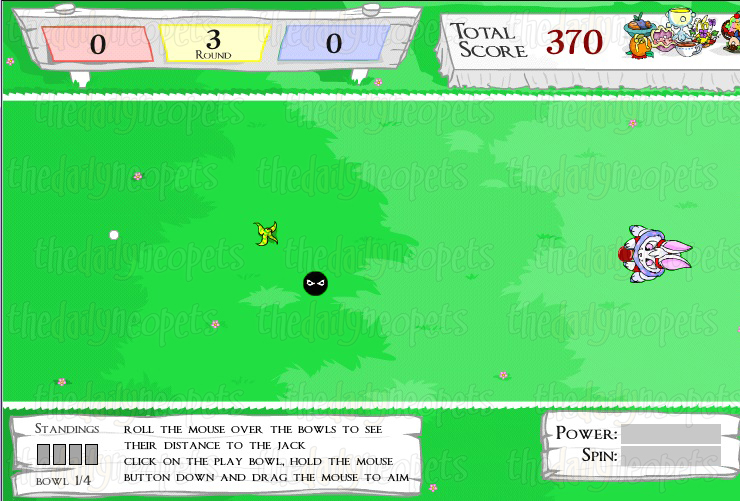 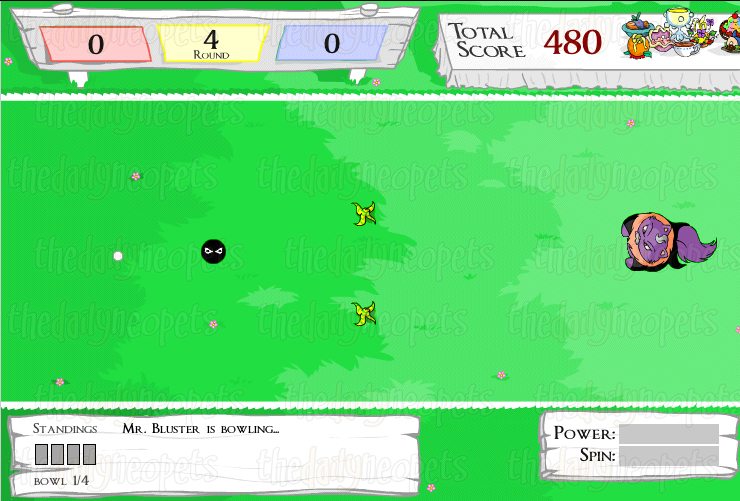 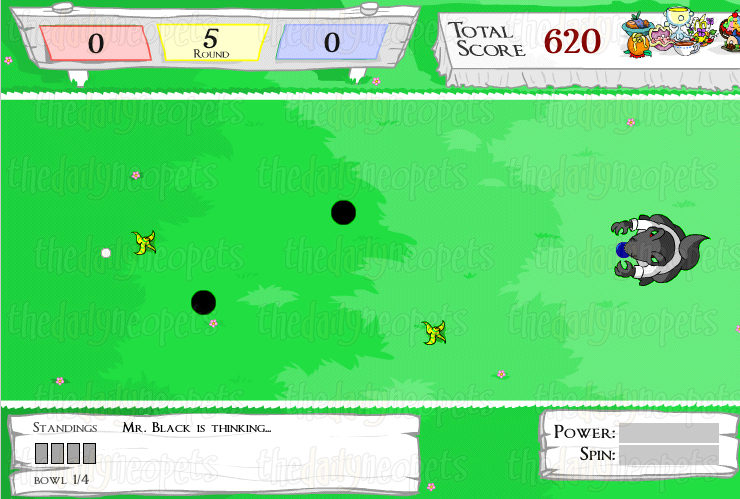 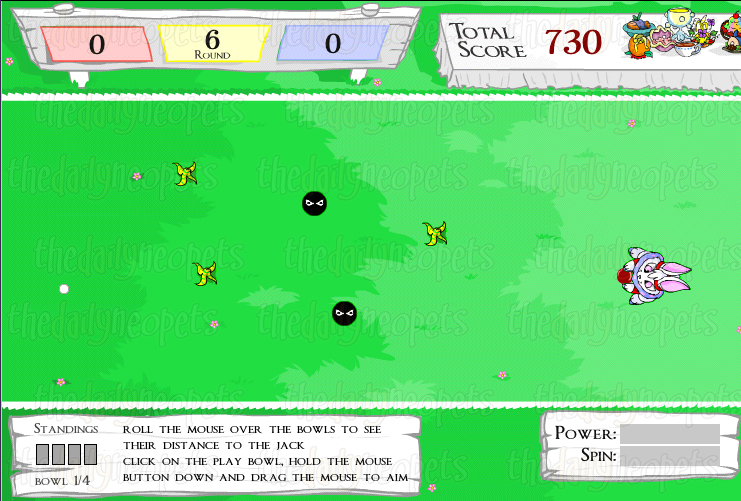 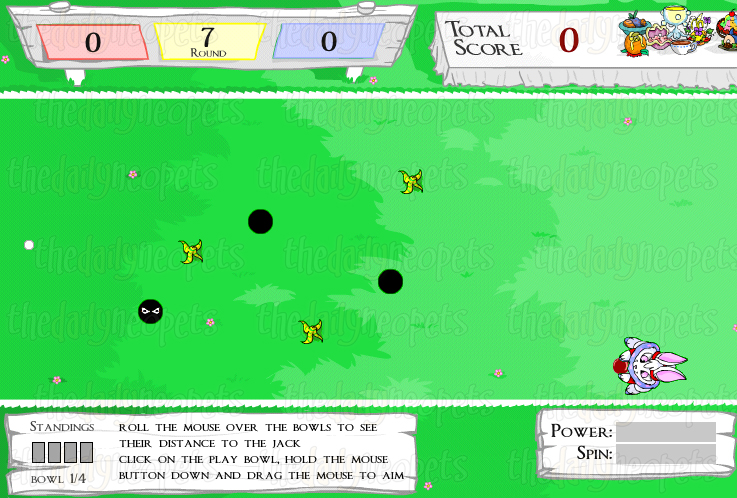 There are 2 cheats for the game. Typing shepherd on the start screen (BEFORE you click 'Start the Game') will double your points. They double at the end of each round when points are awarded. Typing superbowl will skip the current round. You can use this an unlimited number of times, but you will not be awarded points for any rounds you skip.

To shoot in a straight line, line up the small red 'direction' line with the middle of your cybunny's ears, like so:

In addition to spinning, you can also bounce your bowl off the white edges of the field to aim into the difficult angles.

The best way to usually guarantee at least 1 point in the round is to try and get your bowl directly in front of the jack, like this:

It would be very difficult for your opponent to get closer, and will make it very hard for them to knock it out of the way. If they tried to knock it too lightly, it would just push your bowl and the jack forward and you would still be closer. If they throw too hard, they knock your ball AND the jack out, giving you an automatic two points.

Gourmet Club Bowls is a game that anyone can become good at with a little practice. With a little time, you can have a new avatar or a shiny new trophy to add to your lookup!