Faerie Cloud Racers 2 is a game of survival for one or two players. The goal of the game is to survive longer than your opponent by avoiding crashing into buildings, racer trails or each other.

One great thing about this game is that you have the opportunity to choose the controls that are most comfortable to you. To choose which key controls with direction, simply click the"options" menu from the start screen then click the "key box" (the dark grey one) of the direction you want to change the key for and press the key you want to control that direction. Below are the default settings. If you are playing a 1-player game, the arrow keys control their respective directions. The same is true if you are playing as player one in a 2-player game. If you are playing a 2-player game, the default controls and their directions are shown below. Once you choose your controls at the beginning of the game, they cannot be changed until you begin a new game. It is also worth mentioning that neopoints will only be awarded when playing in 1-player mode. 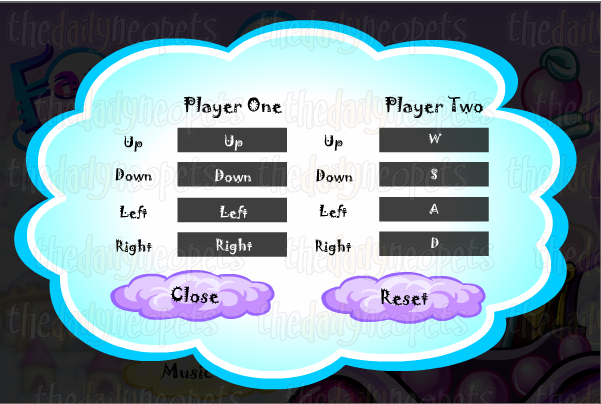 After changing your controls (if you choose to do so) and starting the game, you will be taken to a screen to choose your racer. You can choose one of 8 faeries to play, each of which has their own racer and different style trail. The eight faeries you can choose from, listed from left to right, top row then bottom row are: Fire, Snow, Earth, Water, Tooth, Dark, Space and Light. Choosing certain faeries does not give you an advantage. It is more personal preference. It is also worth noting that this is also the order in which you will face the faeries in the game, with the exception of skipping the faerie that you are playing. Below are all the faeries in the game, as well as what their trails and racer cars look like: 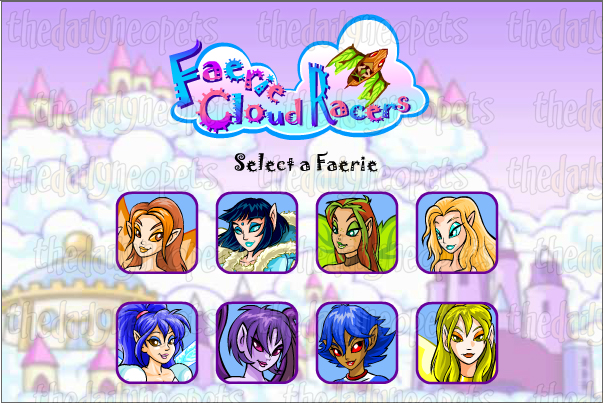 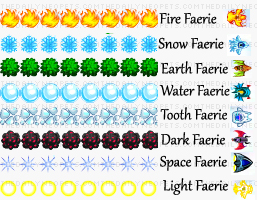 The actual gameplay is fairly simple. Use the direction keys to control your racer and try not to crash into anything. You must defeat each opponent 3 times to move onto the next round and the next challenger. Sound simple? There are different obstacles you need to watch out for. In the example below, I have chosen to play as the Fire Faerie and face the Snow Faerie in the first round.

There are 5 things you need to avoid colliding with. Hitting any of them causes you to lose a life. You have 3 lives to spare each round (per opponent) before the game ends. The obstacles you need to avoid are: Your opponent's racer, your opponent's trail, your own trail, faerie buildings and shrubbery and the edges of the screen. While obviously the buildings, shrubbery and edges of the screen stay still, the other obstacles are a bit more tricky. The trails of you and your opponent are left over every path of screen the racers fly over. Once you have flown over part of the sky, your trail remains there. The same for your opponent. Also your opponent, obviously, is always moving, just as you are. The different obstacles are illustrated below: 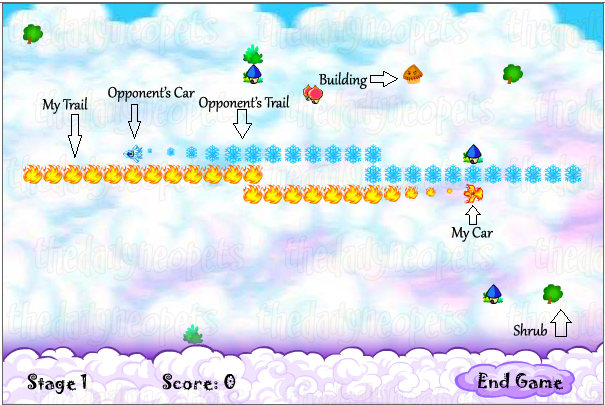 For the first 4 levels, the number of obstacles on the screen increases each round. Starting at level 5, the speed of you and your opponent will begin to increase each round.

Scoring is largely based on how fast you can get your opponent to crash. Scoring for each level is calculated as follows:


After each level, your score is added to scores from previous levels to get your total game score.

There is one cheat that can be used once during the game. Typing in "faerie" during gameplay will clear all obstacles (except for trails and racers) from the screen. Use it wisely!

If you manage to defeat all 7 Common faeries (remember, you don't face the faerie you are playing), you will face Queen Fyora as your final and hardest opponent

One great strategy is to maneuver in such a way to trap your opponent like so: 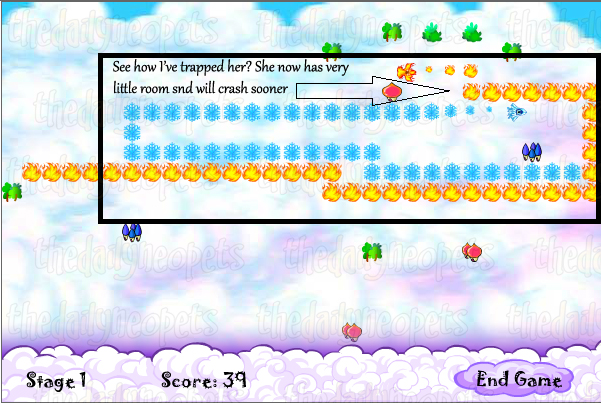 Another thing: make neat lines. This will enable you to stay alive longer: 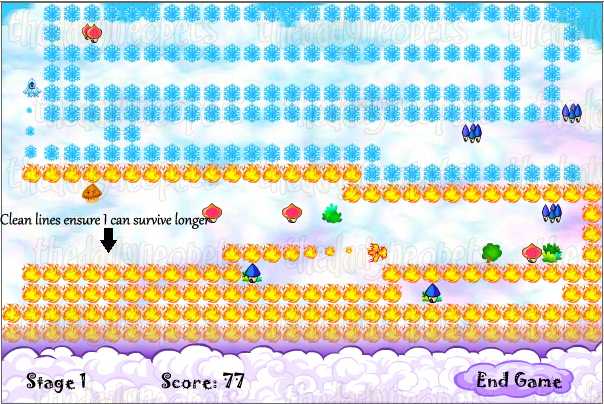 The simplest way to keep your lines neat and more open space to work with is to simply follow the edge of the screen. While you still have to avoid obstacles periodically, this allows you to roam relatively unhindered, as the opponents you face down have a tendency to crash just fine without your help.

Combining these two strategies is the best way to secure a faster win, increasing the number of points you can get from the levels.

While the game is rather simple, mastering it can take some practice. Try out different strategies to see what works best for you. Make sure to celebrate when you defeat Queen Fyora! If you like this game, there is another version of the game, Extreme Faerie Cloud Racers which is just as much fun!