If you think about it, would you really count potatoes if you were bored? Probably not. However, if you were counting flying potatoes, wouldn't that be more exciting? Maybe not, but you're going to have to count them if you want the shiny avatar for this game.

You may think this game is extremely boring, but it really does pass the time.

The object of the game is to count potatoes, as its name suggests. A random number of potatoes will fly across your screen, but along with those comes a multitude of other "extreme vegetables". You must count only the potatoes. It's actually much harder than it seems.

When you start the game, potatoes will fly by your screen at a decent speed. Once potatoes and other vegetables stop flying, you will be prompted to type your guess of how many potatoes flew by (discounting other vegetables). If you submit the correct number, you can proceed to the next round. In each subsequent round, more potatoes (and other vegetables) will fly across the screen. They will also fly by faster and with more of them at any given time. 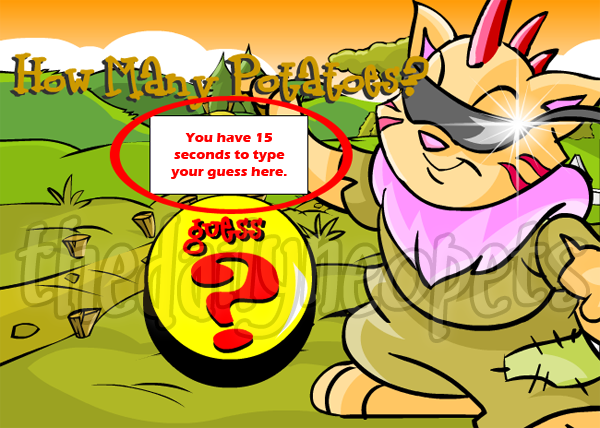 One of the most efficient forms of help in this game would be playing in full-screen mode. Not only does it make for a bigger area for the potatoes to fly across, but it also helps to prevent distractions on the game page.

It helps if you only count potatoes as they either enter or exit the screen. This prevents counting potatoes more than once since all the potatoes look similar.

Again, remember not to count corn, carrots, and other non-potato vegetables. These start flying by your screen in either round three or four. 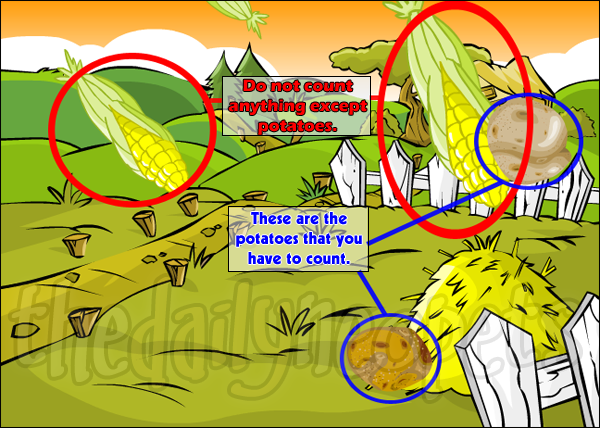 If all else fails, guess. If you have absolutely no idea how many potatoes just flew by your screen, simply estimate. Remember that the "random" amount of potatoes has a certain range for each round. For instance, in the first round, there's always between six and eleven potatoes. There isn't going to be over a thousand potatoes in the fourth round, either.

Obviously, play without sound (unless you can't take the silence) and in a place with absolutely no distractions. Annoying little brothers, music, televisions, and other common household "objects" can easily stop you from getting a good score by interfering with your concentration.

Take breaks. You don't want to get bleary-eyed from staring at the screen too long. However, you can only take breaks on the screen on which it gives you a choice whether to send your score or proceed onto the next round. This is because the game automatically ends if you don't submit your guess within about 15 seconds.

In all honesty, this game is 1% luck and 99% concentration. The key to this game is focusing on the potatoes (and only the potatoes). It's quite a simple game, but it's much harder than you may think. Have fun counting flying potatoes!