After a freak accident, Edna and her shadow were separated! Now she (and her shadow) needs to collect ingredients for a new spell.

The controls seem quite simple at first but they can get very confusing. The up and down arrow keys are used to move both Edna and her shadow simultaneously. Moving from side to side is where things get a little confusing. The right and left arrow keys move Edna accordingly, but are reversed for Edna's shadow. This means when Edna goes right, her shadow goes left. Pressing spacebar will make both Edna and her shadow zap any enemies or breakable blocks they are facing. You cannot shoot while moving. Make sure you let go of the arrow keys before you press space or you'll walk right into the enemy you're trying to shoot.

Your goal is to pick up all the ingredients in each level and return both Edna and her shadow to the cauldron. You have to collect all the ingredients but the apple cores which are hidden in the breakable blocks. Each ingredient is worth 5 points though, so collecting apple cores is recommended if you have the time. To finish a level, all ingredients must be collected and Edna and her shadow have to both be directly beside the cauldron, as shown below. This might seem easy at first but it can get very, very tricky. Luckily, you can get solutions to all the levels by scrolling down. :)

If either Edna or her shadow touches an enemy, they will become "trapped". While Edna is trapped her shadow cannot collect any ingredients (besides apple cores) until Edna is freed, and vice versa. Simply walk over the trapped Edna or her shadow to free her. The game is over when both Edna and her shadow are trapped or the time runs out. For every second remaining after each level, you get an extra point. Additionally, each enemy killed is worth 10 points, so make sure to get all of them. There are four types of enemies that move about randomly.

There are three unique items in this game: the green orb, the red potion and the pocket watch. These start appearing at different levels and appear at random for a short length of time. After all monsters are killed these items will stop appearing. Each has its own special effect.

You've probably heard this many times before, but it applies to this game too; practice makes perfect. If you're looking for a trophy, know exactly how to finish every level by heart. Besides a lot of practice, these are generally good tips for reaching a high score:

Type edmoretime to add 25 seconds to your time once per game. If you are new to the game, save this cheat for when you need it. For more experienced players, type it at the beginning and get it out of the way. It's a nice 25 point boost.

Here they are! Remember, there are many ways to complete each level. These are to help you if you get stuck anywhere. After collecting all the ingredients, get Edna and her shadow into the position shown in each screenshot and follow the arrows to finish the level. I didn't include solutions for the first three levels because well, that would be silly. :) 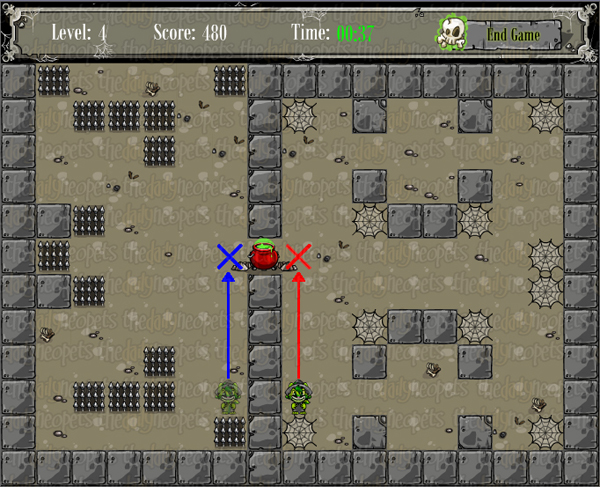 This is the first level that is not symmetrical, meaning that Edna will not always be mirroring her shadow. It's quite simple to get through, though. 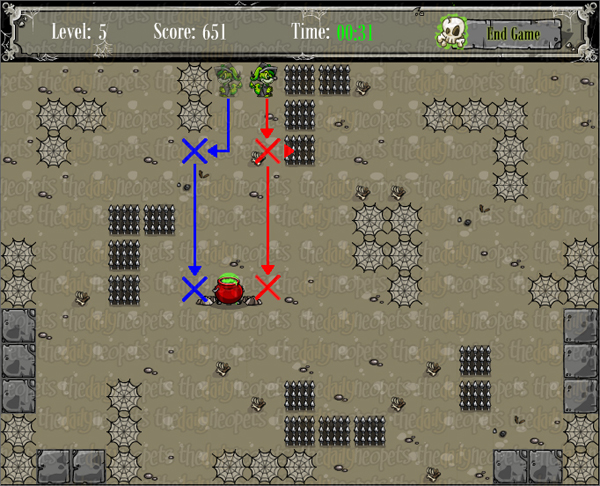 Here is where things start to get a little difficult. Put Edna and her shadow in the position shown. Then move two spaces down, and one right (Edna won't move, but her shadow will move left) leaving them both on the X's. Move down and you're done! 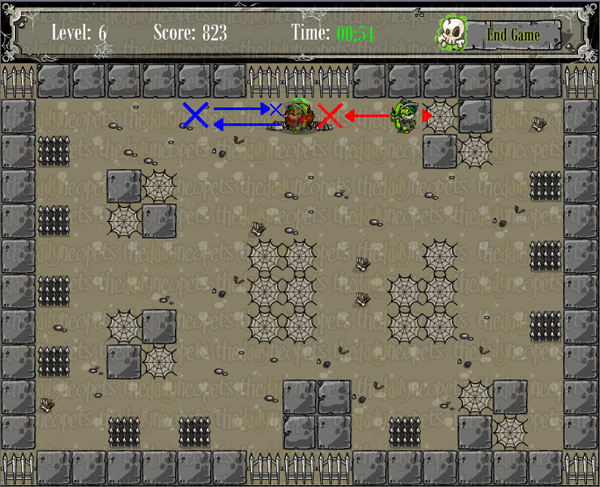 Have Edna and her shadow in the approximate position shown, they can be a little off. Hold down the right key until Edna's shadow reaches the blue X, then hold down left. 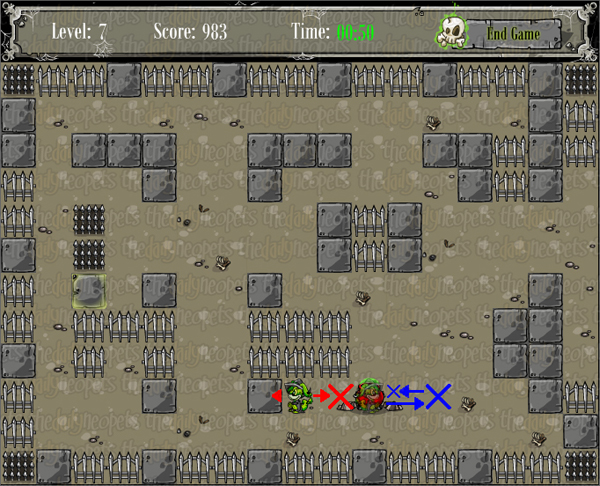 This is very similar to level 6, only Edna's shadow moves right first, then left.

There's no need for a solution for this one. If you're not very good with using both Edna and her shadow simultaneously you can leave one with the cauldron, and collect all the ingredients with the other. 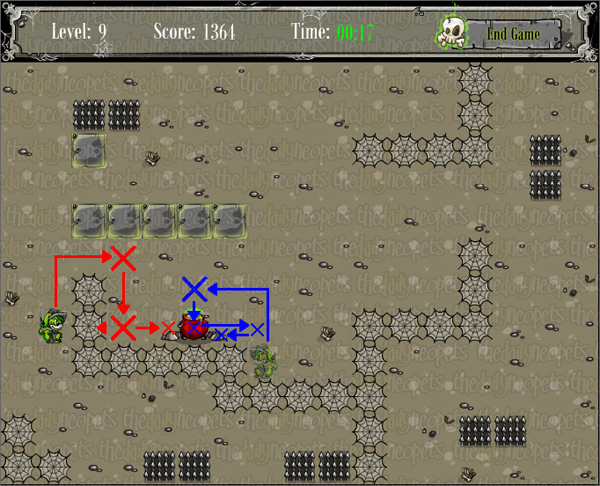 This level is also similar to levels 6 and 7, but a little harder to do since you aren't up against a wall. If you get stuck, follow this solution although there are many other ways to finish the level. Move Edna and her shadow up two, and right two spaces to the first set of X's. Then move down two spaces, leaving Edna on the second red X and her shadow on the cauldron. Move left two spaces and right one (using the same concept as in levels 6 and 7) to finish the level. 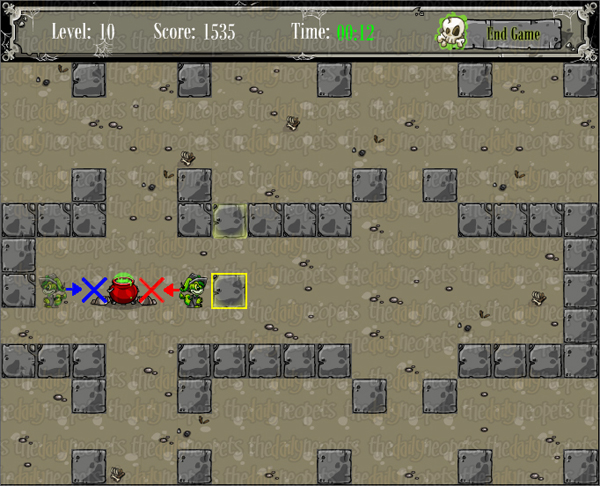 There isn't much time in this level, so get moving quickly. If you can have Edna do one side and her shadow do the other at once, that would save you time. Finishing the level is quite easy as long as you do not break the block outlined in yellow. Be very careful to leave this block, it will make completing the level much easier. 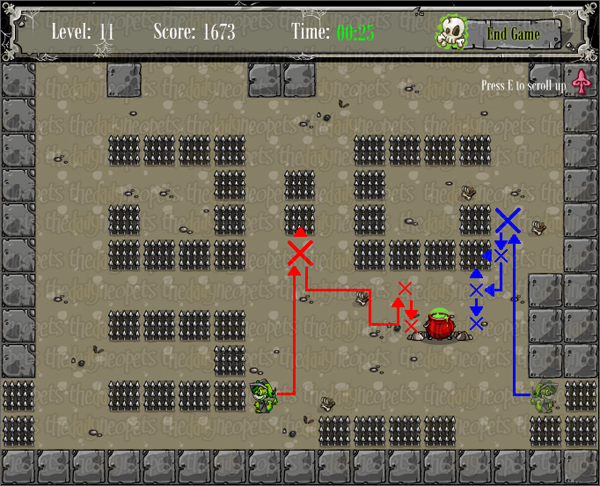 In this level, you will have to use the "D" key on your keyboard to scroll down. You cannot be moving while you scroll, so stop for a second once you finish the top part to scroll. Once you have collected all the ingredients, move into the position shown. Move right one space, and continue up until Edna and her shadow reach their X's. Then move down one space, and right two. Edna's shadow should stay at the smaller blue X, directly under the large one. Move down one and right one space, then up one and down one to finish the level. 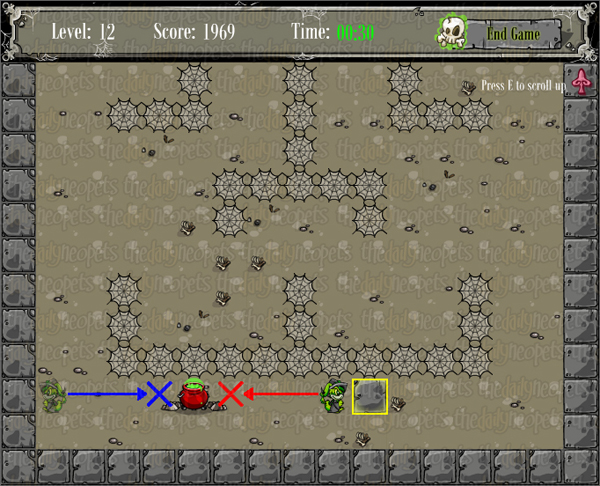 Again, a very easy level to finish as long as you do not break the block outlined in yellow. This level is symmetrical so you should be able to keep track of Edna and her shadow more easily. 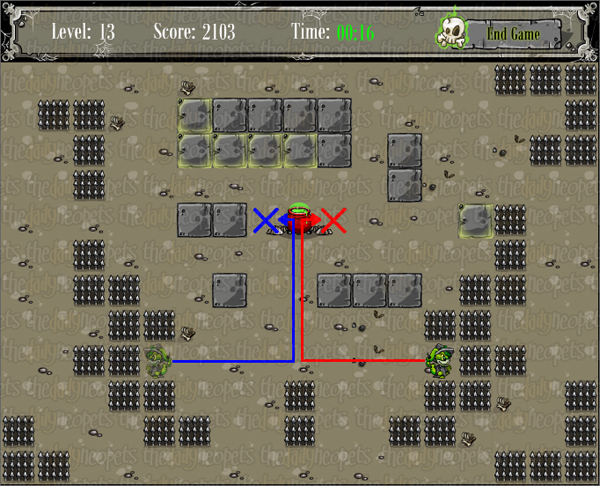 For the second-last level, it's quite easy. Self explanatory. 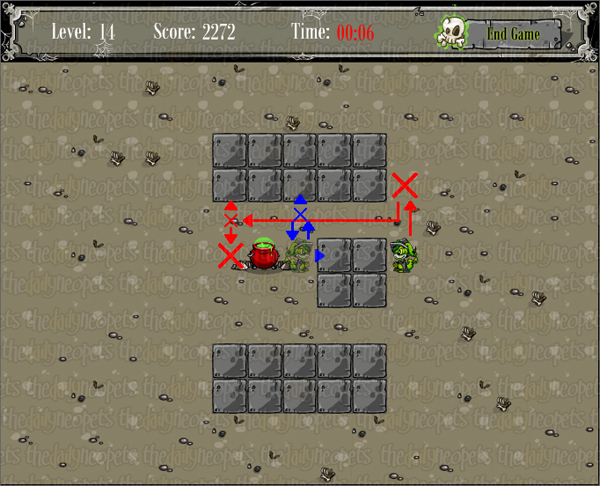 This is the last, bonus level. Break as many of the blocks as you can but watch the time to make sure you have enough to finish the level. Get into the position shown and move up two spaces, putting Edna and her shadow on the red and blue X's respectively. Move down one space (Edna's shadow will return to where she began), and left five, until Edna reaches the small red X. Move up one space, moving Edna's shadow to the blue X, and down to finish the level. Congratulations, you're done!

Edna's Shadow requires a lot of practice, but is quite fun once you become better at it. If you keep practicing and keep those tips in mind, you might just have a shiny new trophy for your cabinet!