The basic pretense of this game is that of a sea raid on the harbor at Krawk Island, and an intercept by the greatest pirate ship of all time - the Black Pawkeet. This legendary ship has decimated the original small one, and it is quickly losing its precious cargo of stolen Dubloons. You play as a young pirate Krawk called Dorak who is paddling in a rowboat, collecting all this lost treasure. Be careful however, the crew of the Black Pawkeet are determined to get those Dubloons for themselves!

In the game there are really only three main things you have to worry about - you, the Black Pawkeet's mines, and the Dubloons. 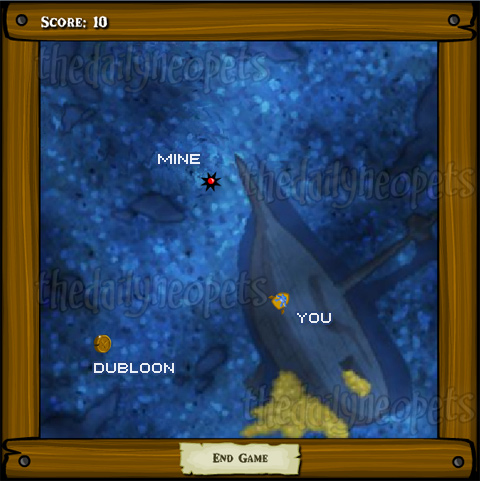 You control yourself with the arrow keys Here's a basic run-down of the controls:

Sounds simple enough right? After you get the hang of "rowing," you then need to worry about the mines and collecting dubloons. These are "attracted" to you and will follow you wherever you go, though they move slightly slower than your boat. Each time you collect a dubloon, another mine pops up. If you hit a mine, the game ends. The good news is, the maximum number of mines that can be on the screen at any one time is 9. Once there are 9 mines on the screen, no more will pop up unless some of the existing mines are destroyed. More on destroying mines later.

Collecting dubloons is how you gain points. One dubloon pops up on the screen at a time. To collect it, all you have to do is run over it in your boat. Different dubloons are worth different amounts of points, as illustrated below: 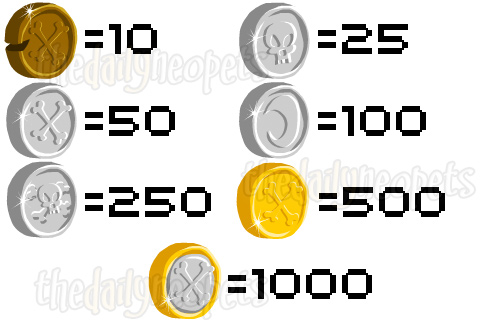 The only other thing you'll want to watch out for is the whirlpool. Pictured below, it sucks in any mines around it and will try to pull you in if you're too close. They are rather easy to avoid, just move quickly away from the pool (avoiding any mines of course) until it disappears (about 5 seconds). They appear randomly throughout the game, and you can also conjure one yourself once per game by typing in "scallywags." 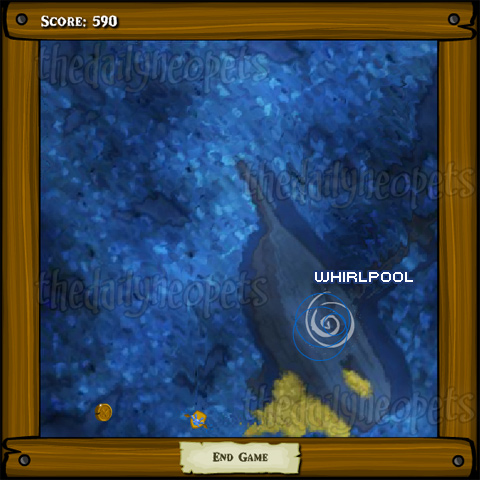 There are two commonly used strategies to help you avoid the mines. Though only 9 can be on the screen at once, it can still get rather crowded.

Method 1
Blowing them up in sets of two is one way to ensure the screen stays relatively clear. With this method you collect the dubloons two at a time, allowing 2 mines to pop up, one for each dubloon collected. You can then lure them into each other by positioning yourself between them, like this: 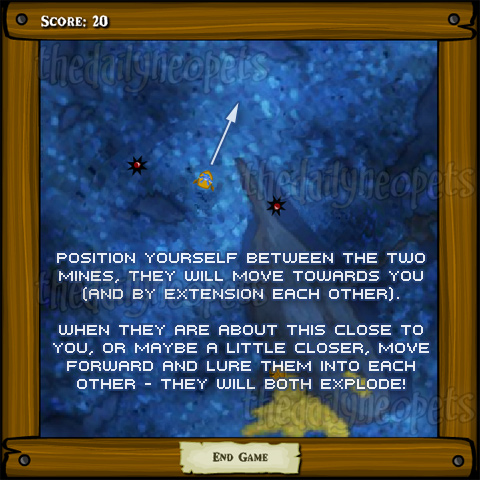 When mines collide, they explode. The only real downside to this method is, because you're destroying them, mines are constantly appearing whenever you collect a Dubloon - and they're not fussy about appearing well away from you either! You do run the risk of being blown up, because a mine can appear directly under your boat or directly in your path, not giving you enough time to stop.

Hint:
Sometimes it's possible to "skim" over a mine, especially when its just appearing so always try to be moving fast when you pick up a Dubloon - this way, if a mine was to appear under you, there's a chance you could fly over it instead of being destroyed. When using this method, there is also the possibility that mines may "jump" out of the way as you are collecting a dubloon if you're going at full speed. When speeding through a group of two or more mines and collecting a dubloon, sometimes a mine will appear to "jump" out of the way rather than colliding with your boat. However, it is unknown if this is a programming glitch or actually part of the game. It does not always occur, so you should not rely on it as a sure-fire method to avoid the game ending. It is a nice break though, and can be tried as a last resort if you have no safer way through or around the mines.

Method 2
Herding the mines into the center of the screen. As mentioned above, the mines will follow you. You can draw them close by sitting in the middle of them and moving away before they hit you, forming a nice little group like this: 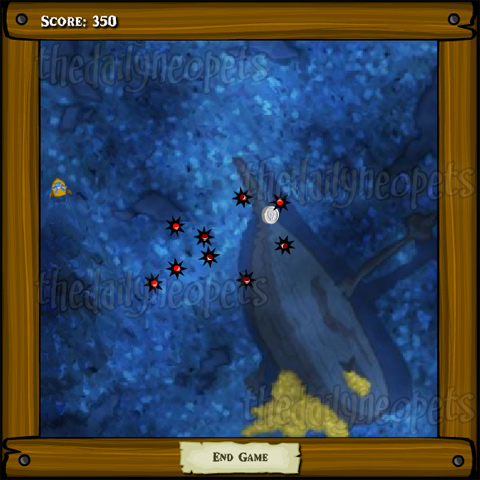 -If you are going for the Dubloon Disaster avatar, and you're not particularly good at the game, you can also restart the game until you get a high-scoring Dubloon for your first one.

-The easiest way to use the scallywags code, if you chose to do so, is to type the first part 'scallywag' before there are any mines on the screen. That way if you need to use it, all you have to do is hit the 's' key and the whirlpool will appear.

-If you are using the group method (collecting all 9 mines into a group on the screen), it may be best to avoid using the scallywags code.

-Finally, as the tip when you start the game up says - if you are running an older computer (or even a newer one with lots of of other programs at once) then turn off the water effects. You can do this by entering the "Game Options" menu and unchecking the Water Effects box. 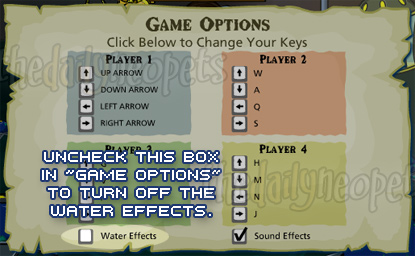 This game is a fairly easy 3k a day - especially if you can get a few high scoring Dubloons early on. It might take some time for you to get good enough to get the avatar, but practice does make perfect and hopefully this guide has introduced you to some helpful strategies for bettering your high score!