Dice of Destiny, introduced to Neopia on the 9th day of Swimming, Year 11, is a Lost Desert themed Luck & Chance game. The aim of the game is to clear the 9 numbered levers by rolling dice, then eliminating the lever or levers that add up to the sum of the rolled dice. To move on to the next round, you must eliminate all of the levers within the amount of rolls allotted to you for that particular round. Dice of Destiny was also the first game in the New Game Challenge. 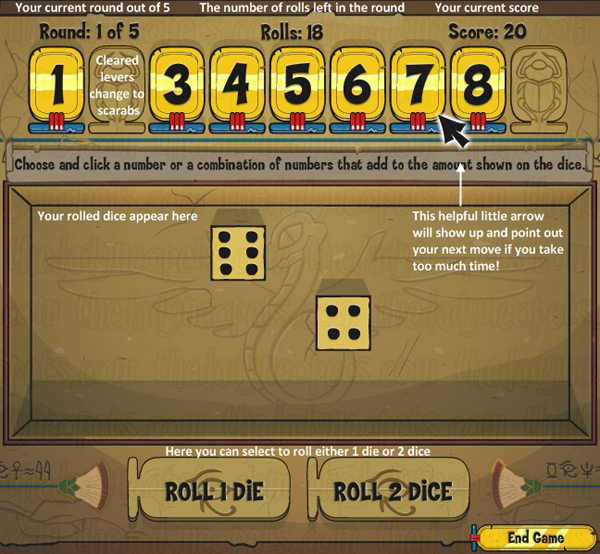 You continue in this fashion until you either complete the game after five rounds, or lose any round by failing to eliminate all nine levers with the amount of dice rolls you are given.

It helps to try and eliminate the higher levers first (7, 8, 9) by rolling two dice. After you have cleared these levers, you can choose to roll either one or two dice to clear the lower numbered levers.

Here is a list of possible rolls & the best ways to eliminate levers:

In conclusion, Dice of Destiny is a fun, easy way to rack up some neopoints and, if you played the New Game Challenge, some cool prizes too. It is also one of the few Luck & Chance games which do not require any NP to play. Now go roll some dice!