The whole point of this game is to clear out all the blocks, while getting the most points as you can. This concept is the basis for all the modes, which will be explained later.

In order to get points and clear blocks, double or single click (depending on the mode) groups of blocks (blocks that are touching each other) that are the same color. The more blocks you clear in one click, the more points you get.

As you progress through the game, it will begin getting more difficult when different colors of blocks start appearing, this lowers the number of same color block combos and makes it more difficult to clear the entire screen. In Extreme modes, the blocks will also start appearing faster, only adding to the difficulty.

Zen Mode: No points are awarded in this mode and you will never get game over. You can play for fun, practice, or stress relief.

Classic Mode: The most basic gameplay mode. Double click to clear the blocks and finish each level with as few blocks left over as possible. You must earn a certain number of points to continue to the next level (shown in the lower left hand corner), but there is no time limit, so take your time and plan it out. In classic mode, you earn 100 point bonus everytime you clear a level with no block left. For each block that you leave behind, 10 point bonus are taken off. If you leave 10 or more blocks, you don't get any bonus points.

Extreme Mode: There are no levels in this mode, every so often, a new row of blocks will come up from the bottom, pushing all the blocks closed to the top of the screen. Your job is to keep the blocks from hitting the top. If you manage to clear the entire screen, you will receive a 50 point bonus!

Double Trouble Mode: The gameplay for this mode is the same as classic mode, except you have two columns of blocks to deal with, as if you were playing two games at once. Remember that both sides are separate, nothing you do in one side will effect the other.

Double Trouble Extreme Mode: Extreme Mode... doubled! Gameplay for this mode is the same as extreme mode, but with two columns of blocks. Beware! If one column hits the top of the screen, your WHOLE game will be over. On a lighter note, if you clear one of the screens, you will receive a 25 point bonus!

Another key part of this game is the power ups. There are many of them that will affect your game in many ways. Simply destroy the power up blocks like you would any other block to activate them. Power ups are active in every game mode, see the chart below for details.

* - When you receive an any time power up, a symbol will light up in the bottom center of the screen. The right symbol is for the Shuffle power up and the left is for the Undo power up.

There are many strategies you may use for this game, especially since there are so many modes. After you play a bit, especially if you've played other games of this type, you'll figure out whats right for you. Here, I will mainly focus on tips unique to this game, divided into two categories, Classic modes and Extreme modes.

GET RID OF ANY TIMER BLOCKS! Usually they aren't hard to get rid of, but do it first, lest you forget and at the end need only one more point... you'll wish you read this. Otherwise, this mode is relatively easy because of the lack of time limit, so go slow and try and make the biggest combos possible. I like to go color by color so, closer to the end, you can get a huge combo with the last color. Try to save an Explode power up, if you have one, until the end so you can take out any last blocks.

Another strategy for Classic modes would be to look for an overkill block in the first level. If there is none, simply restart the game. Start by removing all the combos from the same color than the overkill block except the ones next to it, and then trigger the block. All the remained block of that color will be destroy, leaving you with one less color on the screen to deal with. Try to come with the biggest combo you can now! This strategy can be used in next levels as well.

It's also very important to save your shuffle power up for when you really need it. When you are short by a few points to complete a level, with only 1 more possible move, use your shuffle power up! Another option would be to use it towards the end of a level when you still have a multiplier power up on the screen but none or not many block of the same color attached to it. With luck, the reorganisation of your blocks will help you to get more points from the more points and let you continue to the next level.

Since the main point of this mode is to clear all the blocks, make that your main priority. Make sure you can move your mouse freely and have a good working space, so your arm doesn't get sore or tired. Again, getting all the blocks, but one color and letting that color build up to get a big combo is one thing I like to do. But don't let it go too long or it will touch the top. Only do this if you're confident that you won't lose!

There are many many games like Destruct-O-Match around the internet, as with many other games from Neopets, the idea isn't completely original. However, unlike other games, Neopets actually did a good job with this one, making it one of the best games of this type I've ever played. You can also play Destruct-O-Match I 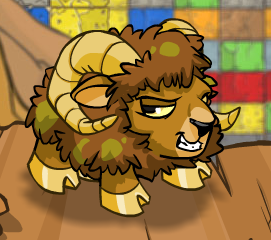