If you've ever played Splat-a-Sloth, this game will sound familiar. Here, all you do is take aim and fire at the Darblat with your snow cannon as the Darblat slides down an icy slope at a very fast speed. Both of these games have the same concept: Splat!

Press the spacebar to fire your cannon when you see the Darblat sliding across the screen. You get points for hitting the Darblat. The amount of points depends on where you hit it.

This game sounds deceptively easy. Just like Splat-a-Sloth, the Darblat appears and disappears nearly instantaneously. Quick reflexes and good eyesight are what you need for this game, and a healthy dose of luck is almost mandatory.

The screen below shows the Darblat along with the snow cannon:

It takes between 3 and 15 seconds for the Darblat to appear on the screen in various poses, and less than 2 seconds for it to disappear again. You only get one shot with your cannon and the Darblat will only slide across the screen once, so shoot wisely.

If you don't have fast enough reflexes, waiting until you see the Darblat may be too late to shoot and hit it. Another technique is to start the game and shoot after a few seconds on the off-chance the Darblat might slide across the screen right then. It will likely take dozens of games to finally hit the Darblat with this method.

The Darblat seems to be harder to hit than the Sloth sock, sadly. You will get frustrated and you will probably quit in a rage at least once, but after you get the hang of how this game works (and get lucky), you will hopefully see a lot of more of this screen: 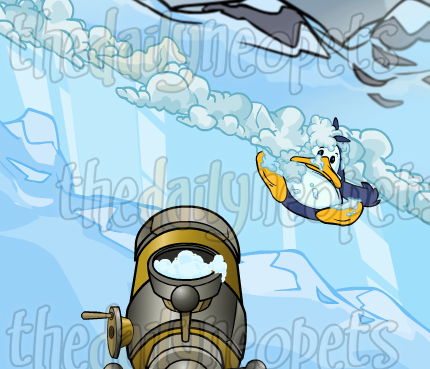