The Castle of Eliv Thade is a literature based game - revolving around anagrams. As you probably know, an anagram is a word with the letters jumbled up. So HTE IDLAY PNOEEST is an anagram of THE DAILY NEOPETS. Same letters, different order.

As Gilly the Usul, you will solve such anagrams to explore the castle and defeat the spectre of the ancient Evil Dea- I mean Eliv Thade.

You play Gilly the Usul. To play the game, you must chose one of two modes (Easy/Hard) and click on a Box to move around the board. Your aim is to visit each and every room to get an artifact. To move along a block (or two, or even three at a time) you must answer an anagram. if you move three blocks, your anagram is 6 letters long, wheras two blocks is 5, and one block is 4 (unless you're on Hard mode, which is 5/6/7). Below we have included a map of how the game is set out and what the layout of it means to you. 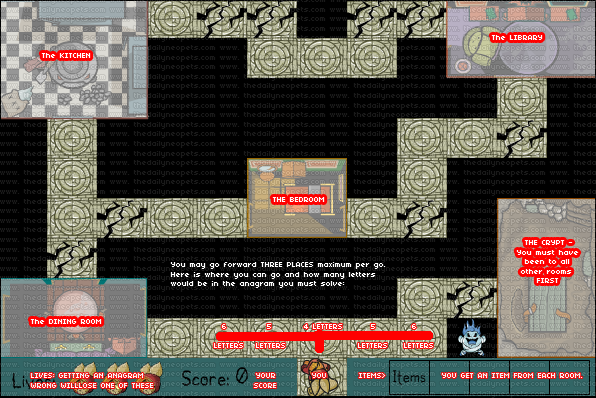 There isn't a strategy as such for this game, so here are some pointers.

There are a few cheats for this game.

Playing this game to completion takes very little time. Playing for an avatar or trophy, however, takes much longer. You'll need 1200 points in order to get the avatar, and up to four times that to get a trophy if you're starting late in the month. (As a general rule, you should always try for trophies at the start of the month when the high scores reset.) A single direct loop around the castle, even on Hard, will only earn ~500 points, nowhere near enough for the avatar. So you'll have to spend a bit of extra time walking around and raking up points.

Always play on Hard if you're playing for an avatar/trophy. The point difference may not seem like much, but it stacks up pretty quickly. Do a standard loop around the castle to pick up the required items, solving as many high-point anagrams as you safely can, and then start pointgrinding. For efficient pointgrinding, stick to the bottom of the board near the entrance where there's a long stretch of uninterrupted tiles, and move three tiles every time. At ten points per stride, it will only take 40-50 extra moves to earn enough points for the avatar. Once you reach 850 points, head into the final chamber. An extra 350 points will be added to your score after you send it in, giving you just enough to earn that hideou- pretty avatar.

The game really is quite easy to use and can get a lot of Neopoints for you. All you have to do is use an anagram finder to be a near enough Pro. Sometimes words will appear that isnt on the finder, but you may then use your Hints.

It is a quick game and because its not majorly hard, using the Hard mode will get you more Neopoints. Just remember not to misspell in the anagram finder! Good luck!