Bruno, the horrid mutant you play in this game, took a potion which was supposed to turn him into a dashing young Gelert. When it did, he told the rest of Neovia about the potion and they drank it too. However, things went horribly awry when the potion turned them into disfigured versions of their former self. Blaming Bruno as the one that started it all, the townsfolk are after him!

You use the left and right arrow keys to guide Bruno around each level. Use the spacebar to jump and drop potions off at the cave. You need all potions from around the level in the cave without getting brought down by the townsfolk.

The game screen is fairly self-explanatory, but here's a simple explanation: 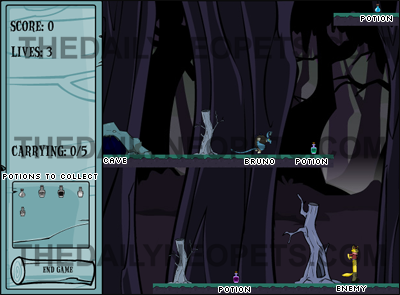 There are 4 enemies that you will encounter in the game. The first two, the Ixi and the Wocky, stay on their own platform and move back and forth. The other two, the Kacheek and the Techo, are able to jump from platform to platform and come in on the later levels. All enemies throw rocks as well, so watch out! Get hit by a rock or an enemy themselves and you lose on of your lives and all the potions you are carrying get sent back to where they were before.

The potions come in a variety of colours and are obvious in shape. They look like bottles of sand, so look out for items around that look like that. The area to the left of the game screen tells you how many potions you need to find, but don't necessary correlate with those inside the level. Collect as many as you can and head to the cave to drop them off. The more potions you collect at once, the more points you get.

The cave is shown by a big rock with a hole in it (essentially what a cave is!). You always start off here and it is handy if you remember how to get back to it quickly. You deposit your potions here by pressing the spacebar. Make sure you're not next to a cave if you jump as you will deposit your potions instead. Points for depositing increase with the quantity you deposit. It goes 5, 10, 25, 50 then 100 for any extra potions on you.

Some things you may pass off as scenery is in fact useful! There are trees in the later levels which look like they have 2 tiers and these can be used as stairs to get up to another platform.

The level scrolls and repeats with you. This means that you could run right and you will eventually reach back to where you were. It also scrolls vertically. So, instead of trying to reach a level above you, just fall down until you reach it again. This way is quicker and limits the probability of getting hurt by the townsfolk.

Similar to other games such as Grand Theft Ummagine this game has a set level limit. This means there is also a set points limit. So, get good at this game, finish it and earn yourself a pretty gold trophy for your lookup!

Also, if you type in lookoutbruno during gameplay, you'll gain an extra life, whereas typing monstermovie will turn the game black & white. ;) Neat, huh?

Fans of other adventure games simliar to this, such as Cave and Corridors should find this game rather easy. It's a simple game which has the potential to earn you a lot of Neopoints! Who doesn't want that, anyway?