Brucey B is a Neopet who, with the help of his prized lucky coin, happens to be one of the luckiest among the citizens of Neopia. With the help of Brucey B's slots, now those who are over the age of 13 can perhaps become the next of Neopia's lucky citizens by winning the jackpot! Are you feeling lucky?

Use the mouse to place a wager by clicking on a button in the rows of buttons labeled "Bet" and "Lines." Then click the lever on the left side of the reels to start a new round of slots. Note: You can only spin 250 times per day! 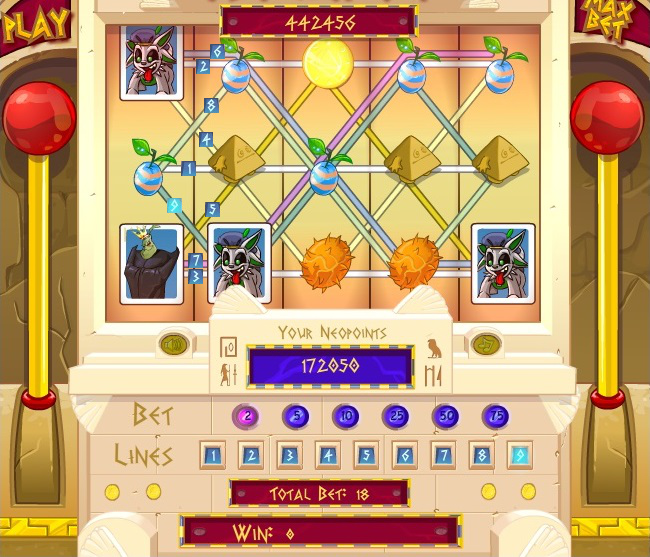 Lines: The reels have nine different lines that can be chosen. If the icons on the reels match along these lines, then you win Neopoints. The chance of winning depends on the number of lines chosen. In the screenshot above, each colored line represents one of the lines along which you want the pictures to line up. For example, there are three Tchea fruits aligned on Line 8. This spin would win only if 8 or 9 lines were bet on.

The total wager is determined by multiplying the bet per line by the number of lines. For example, a bet of 5 NP on 4 lines means that 20 NP will be paid before each round of slots.

The lever on the right side of the reels labeled 'Max Bet' will automatically choose a bet of 75 NP on all 9 lines. It will also spin the reels for you. 675 NP will be paid per spin when using Max Bet.

The table below explains the payouts of each icon.

Palm Tree: A wild card, the Palm Tree can substitute for any other icon on the reels. For example, obtaining four Puntecs with a Palm Tree icon in the same line will award the same payout as five Puntecs.

There is no great strategy for Brucey B Slots because it is entirely luck. There are tips that may be helpful to remember while playing the slots, however.

Max Bet is the common route that most users take while playing the slots, as there is a much higher payout and the chance of winning Neopoints is greater. 675 NP per spin may seem steep to some users, though, not to mention that the Neopoints on hand can drain very quickly if losing becomes a pattern.

Those who tend to avoid Max Bet are probably cautious of losing Neopoints, instead choosing a more approachable bet. A lower bet will result in lower payouts, but the amount of Neopoints per spin will not drain Neopoints as fast as Max Bet would. All 9 lines should probably be kept highlighted due to the fact that it makes winnings, including the Jackpot, easier to obtain.

Brucey B Slots works incredibly similar to Black Pawkeet Slots. The most noticeable difference is that a higher bet, 75 NP per line, can be placed in Brucey B Slots, unlike Black Pawkeet Slots, where only 50 NP can be bet per line. Just like any Luck & Chance game, the risks can be great, but the rewards can be even greater. Is luck on your side?