For those of you who have tried restocking in shops, but find you're not having as much success as you'd like, another way of restocking and reselling is to use the Trading Post

There are actually three ways you can use the Trading Post for re-selling:

Method 1:
Buying lots on the Trading Post and selling the items individually in your shop.

Method 2:
Buy sets of things individually and selling them for a higher collective price on the Trading Post.

Method 3:
Buying lots or individual items on the Trading Post and re-listing them at a higher price.

For the purpose of making the greatest profit, this guide will concentrate on the first two methods.

Choosing What and How to Sell

Whether you choose to make lots from individually bought items or sell parts of lots individually depends largely on what you want to re-sell. Whatever method you choose, it is usually best to concentrate on Easy to Sell Items. These items are generally consumeable (one use) and can include map pieces, codestones, dubloons, books, in-demand foods (kad foods, health foods), etc. What you decide to sell can depend on your budget. Selling Lab Map pieces, for instance, will involve spending more for stock than reselling cheaper items like codestones. The good news is, you can resell on any budget. Make good use of the Shop Wiz, refreshing to catch the best deals, and keep an eye out for quicksale offers on the Trading Post.

For the most part, you can make more of a profit buying in lots and then selling individually. Codestones are a great example of this. A lot of 10 might cost 40-50,000NP, making each stone 5,000NP. However, while some might sell for 1,000NP less, some also sell for twice as much, depending on the market. It's always good to look up a few of the items in the lot in the Shop Wizard before you commit to trading, just to make sure you can actually make a profit from what you're buying.

One exception to the "buy in lots and sell individually" method is Map Pieces, especially pieces for the Secret Laboratory Map. Generally, people are more willing to buy the pieces in sets of 9 (the entire map) because they can get it done it one trade. With some of the pieces being unbuyable in shops (worth more than 100,000NP), and difficult to search for in the Shop Wizard (all the pieces have the same name, so it's hard to tell if you're finding really cheap prices for the expensive pieces or expensive prices for the more common pieces), some people would rather spend a little more to get the entrie set quickly and easily. This is good for you though. If you take the time to hunt down those deals on individual pieces (or win them for free from Key Quest or Random Events), you can bundle them in a set on the Trading Post and make more than the sum of individually re-selling the pieces.

I Know What I Want to Sell

Once you decide what kinds of things you want to resell, you need to start buying them. The different methods require different approaches:

Buying Lots, Selling in Shop: When buying in the Trading Post with the purpose to re-sell the items in your shop, the first thing you should know is the kind of lot to bid on. Search for an item in the category you want to resell. Make sure to sort the results by "newest." You'll then get a list of current trades. The first thing you want to note is the number of items in the trade. It's best not to bother with one item trades. You also want to note how many items in the trade match what you want to sell. Say you're selling dubloons and the lot contains one Two Dubloon Coin, one Five Dubloon Coin, and 8 junk items. It's probably best to pass on this lot unless the wishlist is asking for significantly less than these items are worth (which rarely, if ever, happens). Since you sorted your search to list the trades with the most recently set up trades listed first, you are going to want to stay on the first 2-3 pages of results. Any older than this, and you risk dealing with traders who are a) not online often or b) holding out for the absolute best price they can get. Both of these result in your NP being tied up longer in a pending trade when you could be investing it in other trades or collecting interest on it in the bank. 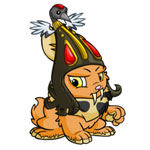 In regards to wishlists, usually the best trades to bid on have either no wish list or a wishlist with a specified amount of NP. Trades without wishlists may have been posted a)with no idea what the items are worth or b)to see what kinds of offers are placed, with the intention to pick the best one. Neopoint wishlists are convenient because it's a)easier to judge your profit and b)easier to make a reasonable offer that is more likely to be accepted. Also, people are more likely to accept trades that involve NP instead of items they would have to then sell to see their profit.

So, you know what you're selling, you've found a lot you like and you're ready to bid. You've decided to bid on a lot of 10 One Dubloon Coins with a wishlist of "NPs." After checking the Shop Wiz, you see that the dubloons are worth between 1,400-1,700NP in shops. So, to make a profit on 10, you would need to bid less than 10 times the amount of what you want to sell it for. If you plan on selling them for 1,500NP each, bidding 15,000NP would mean you make no profit. Any amount you bid under 15,000NP determines your profit margin. It is then up to you how much of a risk you're willing to take. Remember, you can't see the other offers. You may offer 9,000NP, thinking you'll make a 6,000NP profit, but if someone else offers 10,000 NP, you lose and make nothing.

There is also a matter of etiquitte when offering. The Trading Post requires at least 1 item to be offered, even if you're offering enough Neopoints to cover the cost of the trade. What is usually done is the amount of NP is offered along with an inexpensive junk item to fufill the item requirement. Sometimes, even the type of junk item you offer can influence if you win the trade or not. In the above example, you have decided to offer 10,000NP on the trade. You also need an item. You want to avoid offering items that are "trash" as opposed to "junk." "Junk" usually referrs to items with a very low market value and can usually be bought for 1-5NP. A "trash" item is also a junk item, selling for very little, but is also garbage. A Pile of Dung or an Old Rotten Left Shoe are both examples of "trash" items while a Palm Fan, though worth the same amount, is considered a "junk" item. Offering trash can be seen as disrespectful. If a trade recieves two offers of equal NP, but one is offering trash and the other junk, the junk trade is more likely to be chosen, despite the values being the same.

What would you rather have in your pocket?

As mentioned earlier, the best profits usually come from buying in bulk and selling individually. However, one exception to this is usually map pieces. Many people are willing to pay a little bit more for the convenience of a single trade to avoid having to spend time tracking down all the pieces individually. The best way to go about selling map sets is to take a look through the Trading Post to see what common asking prices are. As the prices of pieces, even those for the same map, differ widely, you may want to do some research to determine which are the cheaper, more common pieces and which are the rarer, more expensive pieces. This is to ensure you don't overpay for a common piece thinking it's one of the more expensive pieces. When selling sets, you also want to be keeping track of how much you're spending. Each time you buy a piece, write down the cost, either on paper, in a notepad or work document, somewhere where you can later go back and add up the cost of buying all the items to make sure you sell the whole lot at a profit.

Of course, you're not limited to only re-selling map pieces on the Trading Post. You may also choose to resell groups of books or food or plushies. Whatever you want, really. A good tip for re-selling any group of items on the Trading Post is to make each item in the lot different. For example, if you're reselling groups of books, a pet will only read each title once. Even assuming the buyer has 4 pets, having a lot of 10 copies of the same book would not be a great idea. The same with stamps, organic foods or trading cards. Collectors are looking for variety and convienience when buying on the Trading Post.

You don't want to read this more than once. Believe me.

Whether you're bored with re-stocking in shops, looking for a way to restock more items faster, or are simply interested in trying something different, Trading Post Re-selling may be for you. The more you do it, the better you get and the bigger profits you can make. What are you waiting for? Give it a try!
Written by Staff Compiled
Errors or incorrect info? Contact Us
Welcome to TDN, guest!
Log In • Register