On the 27th Day of Hiding Y14, a new daily was introduced to Neopia, The Mysterious Negg

. The puzzle itself isn't new. Those of you who participated in the Y14 Festival of Neggs may remember the puzzle that needed to be completed to obtain the Negg Amulet to defeat the Neggbreaker challenger. The puzzle is exactly the same and can now be completed daily for a prize. 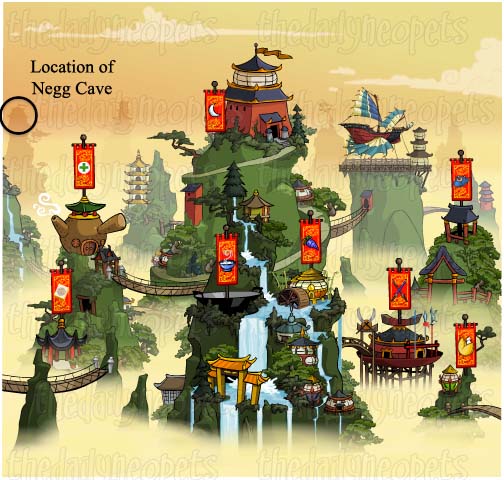 Deep in a cave in Shenkuu lies a mysterious negg. Some say that only by solving the puzzle on the negg can it be opened, and the prize inside revealed... 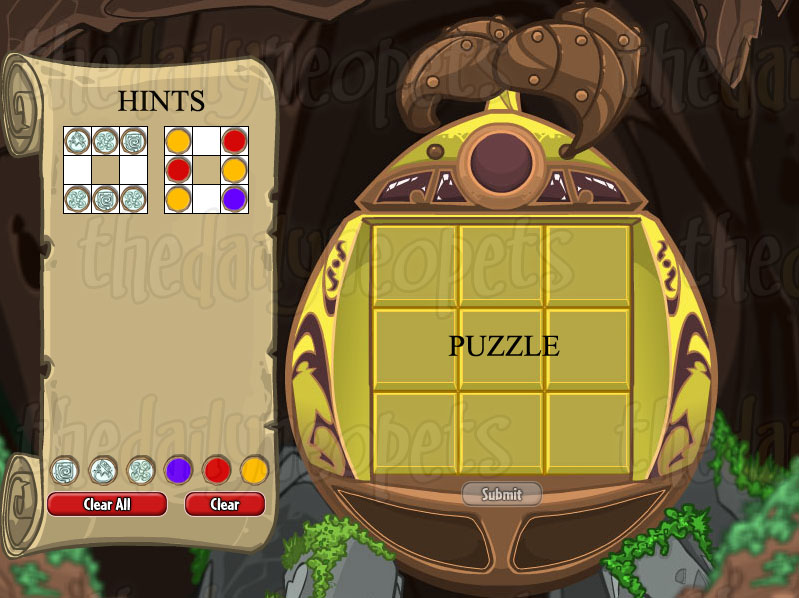 This is the puzzle you need to solve. The solution is fairly simple. The 9 empty squares in the negg need to be filled by a coloured symbol. There are 3 colours and 3 symbols. By the time your puzzle is completed, you will have each symbol on the board three times, one of each colour. 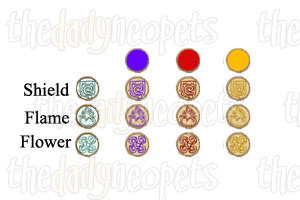 You may be wondering how on earth you're supposed to know which colour and symbol combination goes on which square. Luckily, the game provides you with clues to help you place the solutions. The "clues" can be found on the left in the scroll: 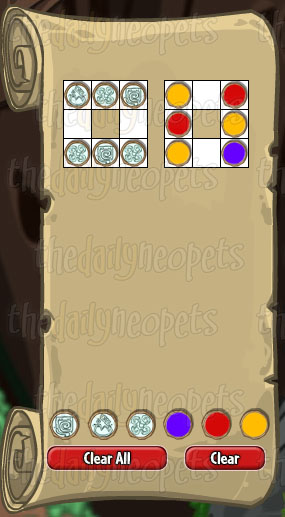 This is basically a visual logic puzzle. The idea is to use the clue "pieces" to deduce what each square on the puzzle will be. Imagine the "pieces" overlayed on the puzzle with each square in the clue representing one square on the puzzle grid. You can visualize it in your mind (especially with the easier puzzles), or even make your own grid and pieces out of paper or in a graphics program to physically move the pieces around to see how they fit onto the puzzle grid. keep in mind, the clues cannot be rotated and must be placed onto the grid exactly as they are.

To place a symbol or colour onto your puzzle, click the symbol/colour you want to use on the bottom of the scroll with the clues and them click the square on the puzzle where you want to place it. Clicking "clear all" clears everything you've placed on your puzzle board so far and clicking "clear" resets your colour/symbol choice for placing on the grid. For beginners, I would recommend clicking "clear" after each grid placement so you don't accidentally place the wrong combination the next time you make a selection for the grid. 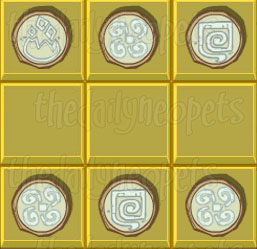 The second clue also overlays perfectly on the puzzle. Now, when overlying multiple clues on the same puzzle grid section, there are a couple rules. You can overlay a colour and a symbol on the same square (which would give you the final square solution) a colour over the same colour and a symbol over the same symbol, but you cannot overlay two or more different colours or two or more different symbols on the same square.For example, a clue puts a red shield on your grid. You lay another clue overtop and one square of that clue overlays the red shield of the previus clue. The square that overlaps is a blank shield. This is fine because it's the same symbol. However, if the overlap from the second clue was a different symbol, a colour other than red or a coloured symbol that did not match (anything other than a red shield), it wouldn't work. Let's add the second clue over top of the first one: 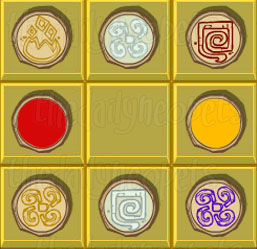 Now that all our clues have been translated to the puzzle, we have final solutions for the four corners of the puzzle, are halfway to solving the middle squares on each side and, so far, have nothing for the middle, as none of our clues included the middle square. However, because we know the final combinations for some of the squares, we can use the process of elimination for the rest. Remember how the goal of the puzzle was to have one of each coloured symbol on the board? This is how we can deduce the remaining solutions.

Try to work on squares where you know either the colour or symbol already. It makes it much easier to narrow down the possible combinations. Looking at our board, we already have a yellow flower and a purple flower. There is one square left with a flower that we still need to assign a colour to. Because the other colours already have flowers, the last flower has to be red: 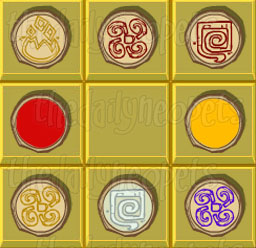 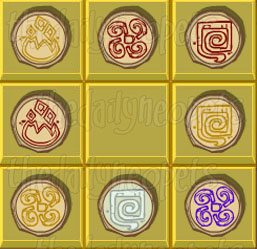 So now we have 3 yellow symbols, 3 red symbols and only 1 purple symbol. This means that the remaining two squares without coloured symbols will be purple: 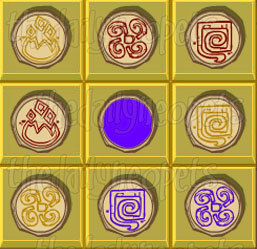 Since we already have a purple shield and flower, the last purple square will end up being a flame. We now have our completed puzzle: 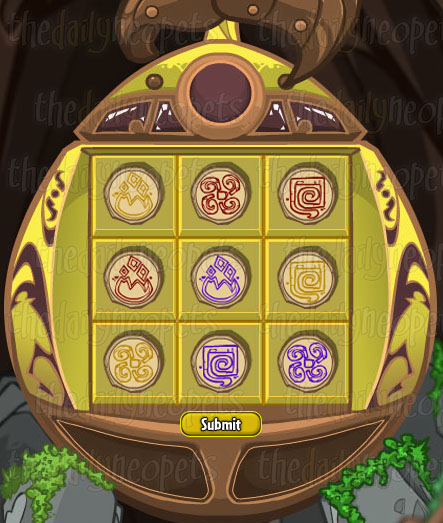 Though this example was fairly easy, the concept is basically the same for most puzzles. Occasionally, there will be some trial and error when you have a clue or two that can go in more than one place, but those pieces are rare and the majority of solutions should come from process of elimination. We have compiled a page of examples of completed puzzles and the clues they were solved with here that may help you in trying to figure out your own puzzle. Because there are thousands of puzzles, we can't show all of them, but hopefully the clues and solutions will help you better understand how the puzzles work.

Since the first one had only two rather easy clues, we're going to do another one together that's a tad bit harder: 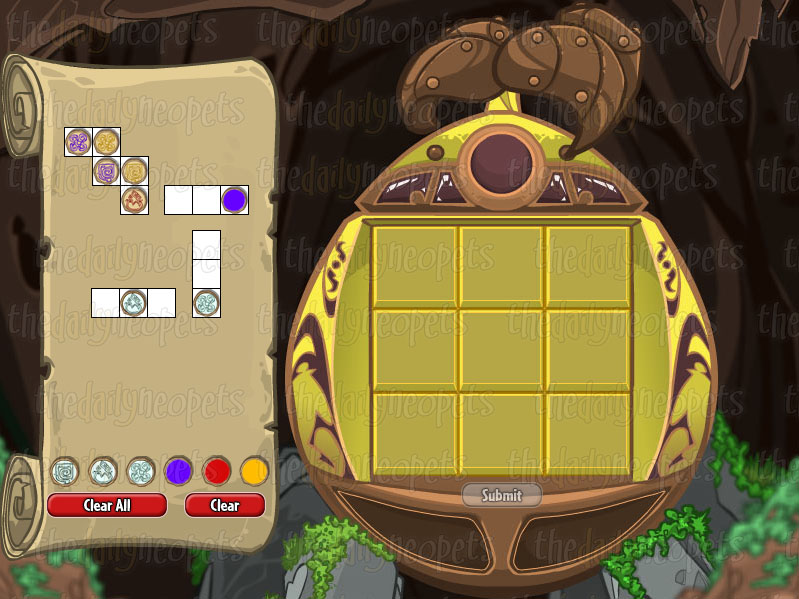 This puzzle has more clues to it than the first one. With any puzzle you get, you're going to want to use the biggest clue first. The bigger the clue is, the easier it is to place because there are a limited number of places (many times only one) it can be put onto the puzzle grid. This large piece can only be place in one spot in our grid. Any other position would force some of the clue off of the puzzle. So let's place it first: 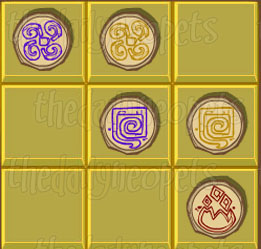 We're then going to move on to the next biggest clue. Since the rest of ours are the same size, you could really pick any of the three to do next. I'm going to choose the horizontal piece with 2 blank squares and a purple on the far right.

Right away, you know that, because the piece has a width of 3 squares, it either needs to go along the top row, middle row or bottom row, right from one side of your puzzle to the other. Any other position would make it run off the page. The hint we are given is that one of the squares in the far right coloumn of your puzzle is going to be purple. Remember the rules we mentioned when placing clues? Different coulours cannot overlap. Since the bottom row already has a red symbol on the far right and the middle row already has a yellow symbol on the far right, it means that this clue needs to be placed along the top row. Let's do that now: 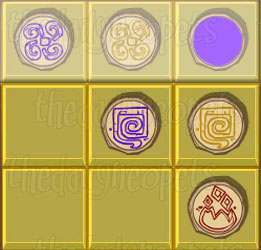 Time to choose another clue. Let's try the one with the flame. Again, it's a three-square horizontal piece, so it will be placed in the top, middle or bottom row. This means the flame will be the center symbol for one of these rows. Since the top and middle row already have symbols in the middle (remember, just like different colours can't overlap, different symbols can't either), This piece has to go on the bottom row: 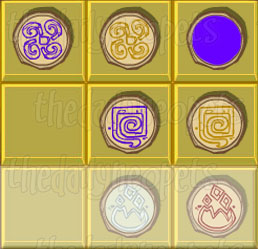 We're now left with one last clue. This piece is a three-square vertical piece. We know it has to go in the left, middle, or right row of our puzzle and that it will fit in perfectly from top to bottom (any other position would make it run off the grid). The clue we are given is that the bottom of one of the colums will be a flower. Since there are already symbols at the bottom of the middle and right columns that aren't flowers, we know that this last clue needs to go in the far left column: 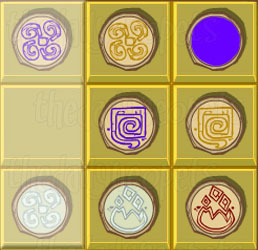 Now that we are out of clues, we need to deduce the solutions for the remaining squares from what we have already. Remember, during this step, it's best to work on squares where you already know either the colour or the symbol. Let's try to solve for the purple square in the top right corner. We know it's going to be purple, we just don't know the symbol. Looking at our grid, we already have a purple shield and purple flower. Since each symbol can only be used once for each colour, this means that the purple square in the top right has to be a flame: 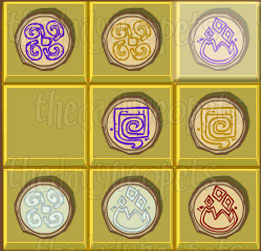 Now let's do the flame in the middle of the bottom row. Since we already have a purple and red flame, we know this one has to be yellow: 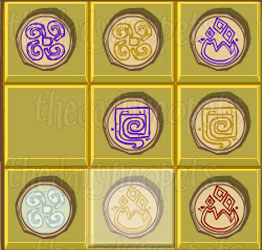 The only other square we have partially solved is the flower. Since there's already a yellow and purple flower on the board, this flower has to be red: 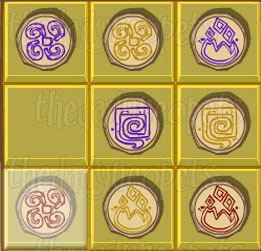 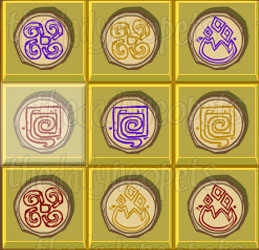 Once you have completed your puzzle, click "Submit" and received your prize! 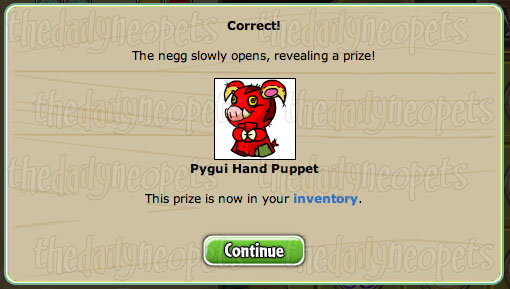 However, if you do happen to submit the wrong solution, you will be able to keep trying:

These are the prizes currently known to be awarded from the daily. As it's new, we're still gathering information. If you receive something not listed, feel free to send us a ticket!

If you did not participate in the Y14 Festival of Neggs, you may have heard rumors about a Battledome Challenger and an avatar for beating that challenger. It seems that people are randomly being awarded the Challenger and/or avatar when completing this daily. However, note that the Neggbreaker is no longer susceptible to the Negg Amulet and has quite the set of formidable weapons. Good luck, battlers!

Don't forget to check off your ferocious new avatar at NeoAvatars!
Written by stream27
Errors or incorrect info? Contact Us
Welcome to TDN, guest!
Log In • Register