NeoAvatars Is All New
The Daily Neopets → Neopets Articles → Auctions

is one of the three main places to buy items, with the other two main places being the Trading Post

and the Shop Wizard

. It works very similarly to a real-life auction, and it also has some relevance to restocking (on Neopets). It's a very good way to make money, and it's quite simple once you know how to do it and you have had practice.

Here is a screenie of the auctions main page: 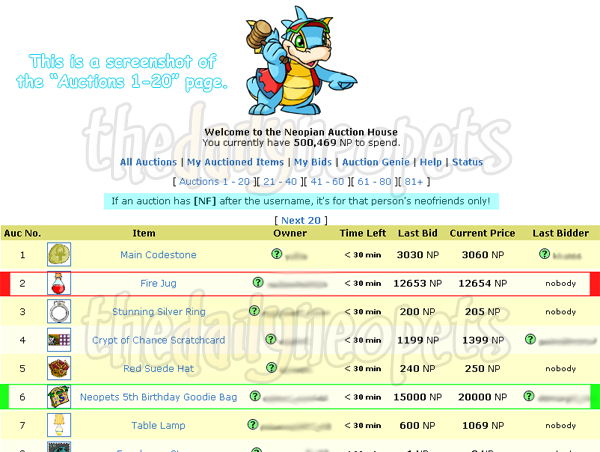 Below the auctioneer is a set of links to navigate around the auction house. You're currently on the "All Auctions" main page, also known as the "Auctions 1-20" page. Listed on this page are auctions that are about to end (like literally in a minute or two). The higher the auctions are on the list, the shorter their time left is. These are the auctions that are best to bid on.

The next two links, My Auctioned Items and My Bids, are self-explanatory. They list your auctioned items and the auctions you've bid on, respectively.

The Auction Genie functions almost exactly like the Shop Wizard. Checking the box ignores Neofriend-Only auctions. NOTE: In NF-only auctions, only Neofriends of the item's owner can bid on the item. These are noted by "NF" next to the owner's name.

The last two links are Help and Status. Help is self-explanatory, and Status shows how quickly the auctions are being processed.

The next row of links (the ones with the numbers) are for viewing other auctions that are further away from ending. The lower the number, the less time is left.

Bidding is simple. Simply type your bid into the box and click "Place Bid". The lowest allowed bid is already in the box, so if you don't want to bid extra neopoints, go ahead and just click Place Bid without typing anything in.

What to Bid For

Simply bid for anything that has an auction price lower than its actual price. That's a given, but that's really the only thing you have to look for. However, it's good to go for items that are easy to sell, such as dubloons, codestones, and paint brushes. Familiarize yourself with the prices of each codestone along with the prices of the low-denomination dubloon coins so that you don't waste valuable time using the Shop Wizard.

Once the auction has ended, it says "This auction is closed, you cannot place any more bids!" instead of the Place Bid button and the box to input your bid. If you had the last bid in the auction, you win it! A few minutes later (usually about 2 to 10 minutes), the item will appear in your inventory, and you will get a confirmation neomail like the one below. 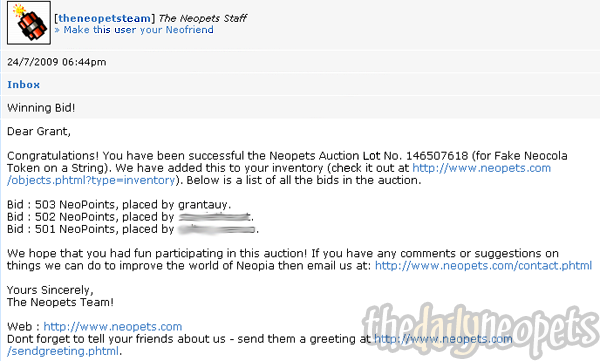 To auction an item, all you have to do is click on the item in your inventory. Then select "Auction item" from the dropdown and click "Submit". 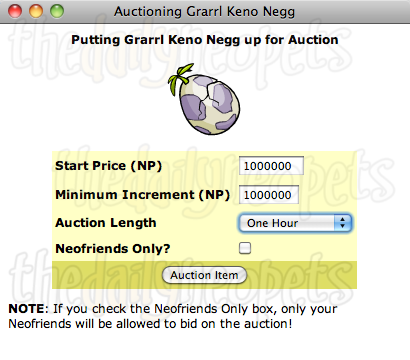