It's been a rough couple of years. Neopets' new owners are still getting into the swing of things, and we can no longer rely on those events we have all taken for granted for so long. As April Fools' Day loomed before us, we were unsure what strange (but harmless) adventures lay ahead (if any). But in the wee hours of the morning on April 1, 2016, lo and behold, TNT delivered.

Users who discovered the banner on the front page, or followed it in the news, were taken to a "Net Worth Calculator" page, which claimed it would calculate the worth of everything on their Neopets accounts, including social and economic standing. After clicking the button to initiate the Calculator, it proceeded to check various statistics, including some unexpected ones such as "Analysing the Complexity of Your User Lookup" or "Analysing your Pet's Taste in Wearables". 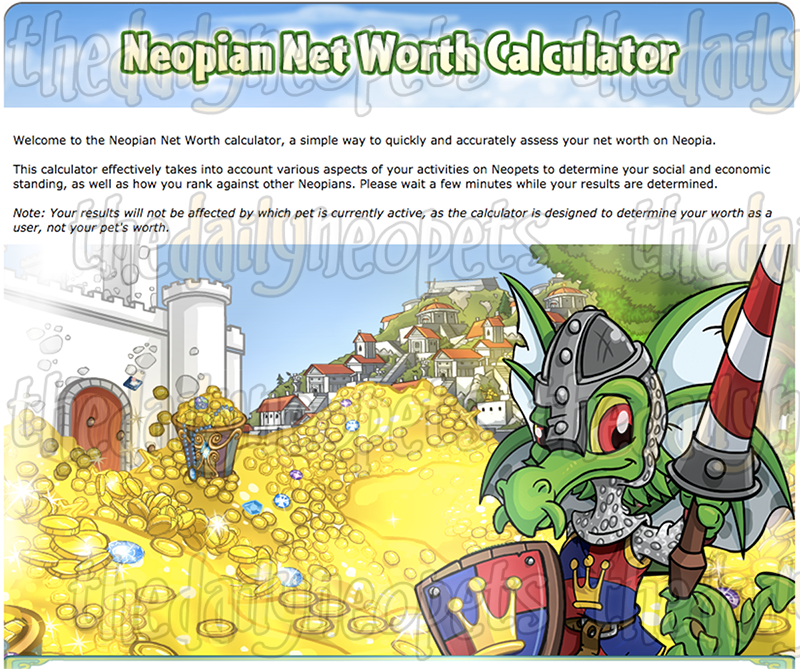 Upon receiving their results (which never actually occurred), users would theoretically be able to choose and join one of several elite clubs. Each club had different, special perks and characteristics based on where a user's worth came from.

On April 2, users who attempted to visit the Calculator were greeted with a message informing them that the calculator didn't seem to be working correctly, and were given a wearable prize: Priceless Seal.

In addition to the Calculator, TNT also added four fake items to the site:

With the release of the news on April Fool's Day came a couple fun, phone "announcements" from TNT.

The first was an announcement for a movie trailer teasing an upcoming film, "Dr. Sloth Returns."

The second was for a "3D Virtual World version" of Neopia, that would allow users to explore the terrain of their favourite fictional world!

Written by Nellethiel
Errors or incorrect info? Contact Us