Two Player Battledome fights are usually the rewards of training after you've unlocked all the Battledome avatars. It's a nice feeling to be able to beat a friend or a random competitor. Here, you will learn the basics of two player battling.

In a 2 player fight, you will need to challenge (or get challenged) another player's pet. To challenge a pet, go to its lookup and click "Challenge". 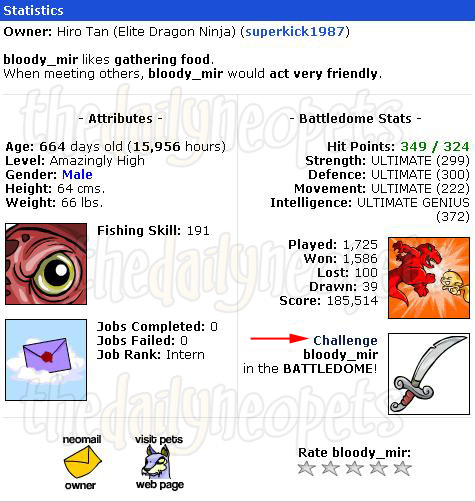 After clicking the challenge button, fill up the challenge form by selecting which pet you're using, how long before the challenge expires and some other minor rules you might want to have (e.g., no freeze, no Stat/pet altering, no stealing, etc). 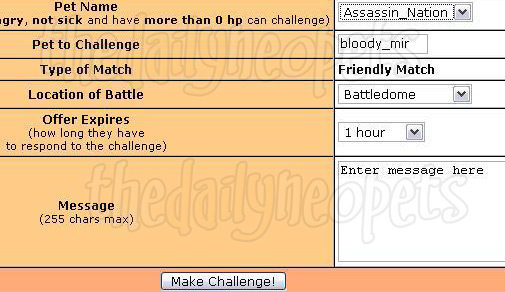 Now the challenge has been sent. Just refresh the Status Page until your opponent accepts or rejects your challenge.

The Quickfight option can also give you a great battle, although many pets using quickfight are idle for long periods of time and most end with one pet withdrawing after their opponent has been inactive for 10 minutes.

Upon clicking the Enter Battledome button, it is highly likely that either you or your opponent will get one of these error messages.

If you get this error message, it means that you have entered the fight, but your opponent has not. This is not a glitch, though it could have been phrased better. Just click back and enter battledome until you get through. If you keep getting this message, try contacting your opponent to see whether he or she is actually trying to enter the battledome.

If you get this error message, it means that a match was created by one opponent entering the battledome, but has now expired. Just click back and enter battledome to create a new fight ID until you get through.

If you already sent a challenge to another player but decided not to push through the fight, then you can withdraw provided that the battle hasn't started yet. To withdraw, simply click on the "Click here" link below your challenge. It will transfer you to a page where you can finalize your withdrawal by clicking the "Withdraw" link. Remember to read the red text just above the "Withdraw" and it must say "You can withdraw without the fear of penalty". Please do not withdraw simply because you are losing! This type of behavior is punishable by TNT. If your pet got stuck after attempting to withdraw, try these simple steps before sending a ticket.

League Battles were invented by Battledome enthusiasts to level the playing field. A league is basically a group of pets who are around the same strength (as in combined stats, not the stat STR). You can find out what league your pet is in by using the calculator here.

The formula is calculated by using the minimum strength or defense the pet would need to be at its current boost and the pet's hp.

These ratings then fall into different leagues based on pre-calculated ratings. Pets with defense more than 1 boost higher than their strength are moved up a league due to the lack of weighting for defense.

This system of calculation tends to produce pets with a defense boost 1 boost higher than their strength boost, as well as different viable league builds, such as 97/20/35 and 74/35/55 for league 5.

League battling is the standard for inter-guild wars, with leagues also being used in large 1-player events. Many battlers who post open battling boards also use leagues to determine which pet to fight with, or whether to fight at all.

Set Cap Battles were made to even out the chances between the rich and poor so that you don't have one pet using Scrolls of Knowledge and the other using Wand of the Dark Faerie and Super Attack Pea. The cost of your set has to fall under the set cap limit agreed upon. A common set cap is 500K NP; for help with creating your set, visit our 500K Weapons Guide.

Continue with articles in this series...