The Search for Princess Lunara

The peaceful land of Shenkuu is shocked by terrible news: Princess Lunara has been kidnapped! Your mission is to rescue her. However, to prevent the kidnapper from getting away with his hostage, all bridges are guarded and only those who know answers to specific questions are allowed to pass. Do you have what it takes to succeed?

First of all, decide how many questions you want to answer (6 or 12). Then, choose a category of questions from the following:

A guard will ask you a question that you can answer either by using your mouse or hitting the number corresponding to it on your number keys. For each good answer, you will be awarded 15 points.

The following screenie will give you a good idea of what game looks like: 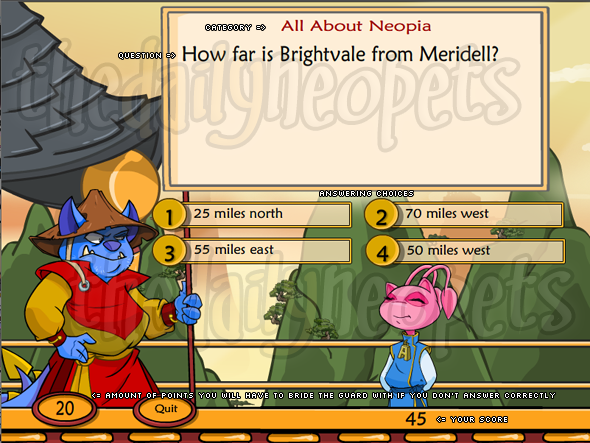 Because some questions are timed, I strongly advise you to pick a category and to stick with it through all the game. If you decide to always be questioned by the same guard, you are more likely to remember answers which will help you to complete the game faster.

Below are all the answers to the question you will be asked in the game, sorted by category.

Questions written in red are the ones that are associated with a 15 seconds time limit.

The Search for Princess Lunara is a game that will help you to develop your memory skills while increasing your knowledge about Neopets. It provides a very good amount of Neopoints that compensates for the lack of entertainment generated by the game.