There's plenty of things to do over at Mystery Island, such as training or shopping. Some neopets would rather just have fun though, so any time of year you're sure to find some Myncis on the beautiful beaches enjoying a game of volleyball! 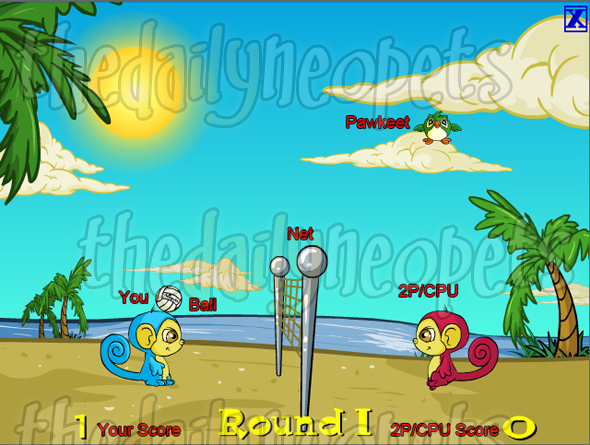 The Pawkeet is a vital part of the game. It moves around the screen and if it is hit with the ball, the last person who touched the ball gets a power up. You can only have one power up at a time. Here are the possible power ups:

When you are serving the ball, try to hit it on the left edge of the center cloud, like in the image below. This tends to give better results, especially on the first level where the opponent isn't too smart! 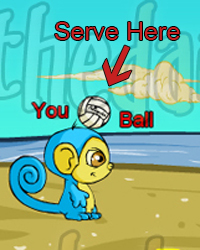 Have patience with the game! You may think that the game will move quickly after Round 1, but when the opponent is better, it may take a while for a point to be scored. Work at a good pace and focus on keeping the ball off of the ground rather than scoring. This tip applies particularly well when you have the Super Jump power up. You may be tempted to jump a lot, but that will give your opponent more openings.

As with all games, practice makes perfect! The nice feature of Mynci Beach Volleyball is that you can practice with a friend in the room as well. If you play it often enough you may just be able to develop your own strategies!

If you are aiming for the trophy, it is best to submit your score early at the beginning of the month. Mynci Beach Volleyball has a limit of 1,220 for a perfect game. If you wait to submit a score this high, the three top spots may already be taken.

You can type dirigibles anytime during the game to make a Kiko balloon float across your screen.

You can type turdle once per game to automatically get a turdle power up that won't replace your current power up. This is very useful in sticky situations.

Mynci Beach Volleyball is a great game to play by yourself or with a friend! It's a perfect mix of fun with an added challenge. Practice enough and maybe one day you'll get the avatar or even a trophy!