Korbat's Lab is a classic type of game that you've probably played before in some fashion (the original idea was called breakout). Its quite addicting and easy enough to play if you have the concentration and practice. The game is quite well done, with all the power ups and different block types that are included. It is definitely a good remake of a classic game, unlike some of the other games. The predecessor to this game, also known as Korbat's Lab, is playable here

Now, to learn about the playing screen. On the right side of your screen, you'll see a clock, but it's not your ordinary clock... this clock displays the number of lives you have left. In the center of the screen are the boxes you need to destroy. They are fairly simple, requiring one, two, or three hits to completely get rid of them. There are however two boxes that you should be aware of. The fire box (it has a small fire graphic on it) will release a fireball that destroys any boxes in a straight line beneath it. The other box is a bomb box (that's right, it has a picture of a bomb), it will destroy all boxes touching it.

There are a few useful cheats for this game. Type in spiderbite to gain an extra life, this is best to use later in the game when you only have one or two lives left because if you're lucky enough to get the extra life powerup, and you already have the max number of lives (4), you'll miss out on that extra opportunity. To make typing in the code easiest, type in "spiderbit" before you release your first ball and when you need that extra life, just press the e key.

Another useful cheat is skip. You can use it as many times as you want throughout the game by just typing it in. This cheat doesn't give you any point advantages, as you don't gain points for clearing levels. However, if you're pressed for time or just can't get that last brick, skip is a handy time saver to have at your disposal.

The third cheat for this game is destroy. It will cause your ball to burst into many more balls. Using this cheat will almost guarantee you a lot of points, or help you to get the last couple bricks. There are near endless ways to use this cheat, as you play the game, you'll find the right time to use it.

The last cheat isn't really a cheat at all, merely an easter egg. Type in monstermovie to play the game in black and white. Its kind of like an old... monster movie!

If you ever find yourself with a stuck ball (continuously bouncing back and forth between the sides of the room), wait until the candle on the right of the room turns purple and press the spacebar to change the ball's direction.

As you play the game, you'll find your own little strategies that will help you. Practice makes perfect is especially true with this game. 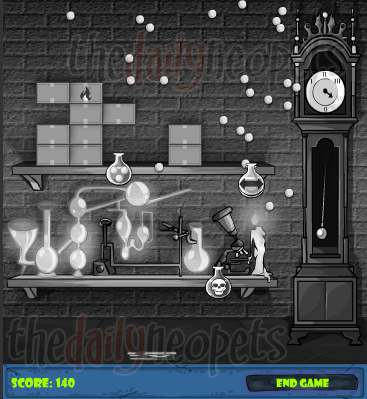 All in all, Korbat's Lab is a pretty fun game, with lots of fun features to play around with. There are many other variations of this game if you enjoy it that much and they're very easy to find. With all the cheats, this game is also a very good money maker and easy to get the maximum of 1000 NP (3000 per day).