Hasee Bounce is a classic game of see-saw... with a twist! Help Jimmi and Woogie collect tasty doughnutfruit to satisfy even the biggest of Hasee appetites. Keep an eye on the clock and watch out for those nasty slime balls and dung heaps!

The instructions are pretty simple: earn as many points as you can before your timer reaches zero. The Hasees can be controlled using either your mouse or your keyboard, to move the Hasees left and right, and pressing the spacebar to jump. While Hasees are in the air, they can also be directed left and right so they don't just fall straight down. Each Hasee can only move around on their side like so: 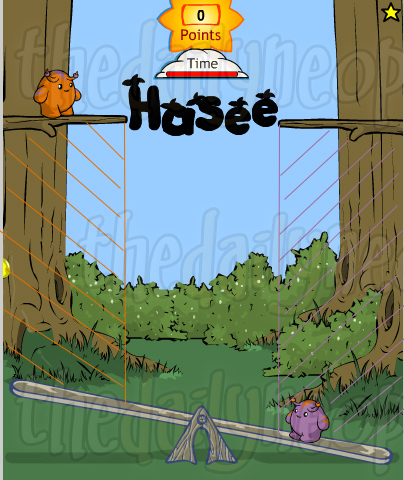 To collect points, you must manoeuvre the Hasees to collect doughnutfruit that will be flying through the air. The points for each type of doughnutfruit are as follows:

**There's also been a rumour that there's also a Faerie doughnutfruit available to collect in the game that's worth 80 points, however, we've yet to obtain a photo of one in the wild.** 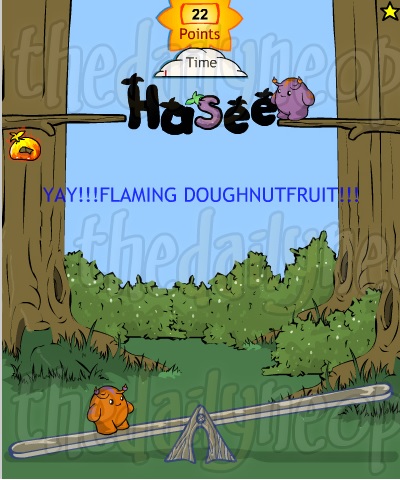 Also available to collect in the game are coloured letters that spell H-A-S-E-E. Each letter will be either purple or orange and can only be collected by the Hasee of the same colour. Each letter collected adds +2 seconds to the game timer and two points to your game score. Collecting the entire word "HASEE" will award an additional +20 second bonus if the word is collected in multiple colours, and a +40 second bonus if all the letters collected are a single colour. These time bonuses are awarded each time the set of letters is collected during your game, so you can collect the time bonus multiple times within the same game. 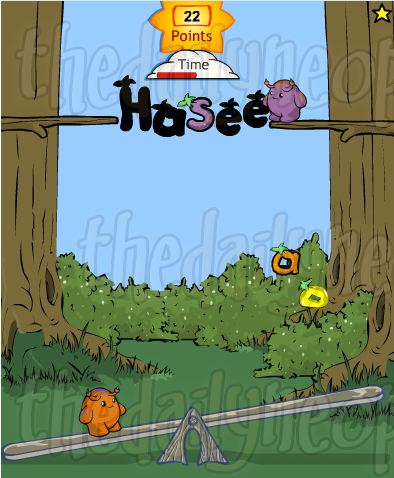 In the case of all the items that give points, collecting more than one item during a single "turn" will cause the points to multiply for each item collected. In this case, one "turn" is from when one Hasee leaves its branch to when the other Hasee lands on its branch on the other side of the play area. For each additional item you collect during a "turn," the points are incrementally multiplied like so:

So if on one "turn", my purple Hasee dropped from the branch and first hit a yellow doughnutfruit (1 point), then a blue one (3 points), then on the way up to the branch after leaving the see-saw, the orange Hasee hit a silver doughnutfruit (5 points) and then an orange "H" (2 points), your points for that "turn" would be:

The only thing the multiplier doesn't affect is your time bonus, so even if you collect a letter after collecting other letters or doughnutfruit, it will still only award you a +2 second bonus.

The last kind of item that your Hasees may encounter are NOT things you want to collect. Among the doughnutfruit and the letters, you'll sometimes encounter these little goobers:

Hitting any of these three items will stun whichever Hasee hits it for a brief period of time and cause it to let out a small grunt of disgust. During this time, the Hasee will be unable to collect any other items, but will still be able to bounce up and down. The stunned Hasee will have a ring of stars around its head until the effect wears off. 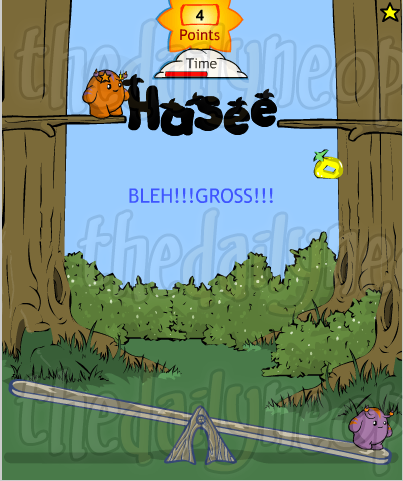 Though the game is fairly simple to learn, it takes practice to perfect your score. Try the different controls to see what works for you, and experiment collecting items in different orders to maximize points. Make sure to use the extra time cheat, and you'll be on your way to a trophy in no time!

Written by Hyperknuckles and Stream27
Errors or incorrect info? Contact Us
Welcome to TDN, guest!
Log In • Register